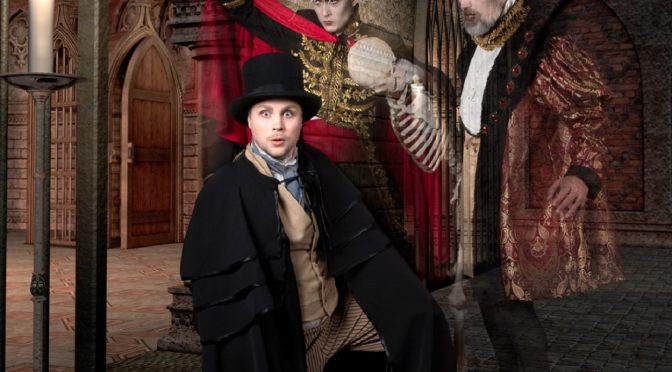 Our hero Robin Oakapple has been living as a farmer for years, trying to find the courage to ask the beautiful village maiden Rose Maybud for her hand, but he is also hiding a secret–he is really Sir Ruthven , the Baronet of Ruddigore, and has been in disguise while his younger brother Despard assumed the title–and the curse. Betrayed by his foster-brother Richard, Robin’s real identity is revealed and he therefore must take on the burden of committing a crime every day in order to appease the curse– and the ghosts of all his ancestors past appear in Act 2. They are not at all happy with his attempt to dodge fulfilling his title and the curse. Will Robin be able to counter the curse and live the honest life he craves? END_OF_DOCUMENT_TOKEN_TO_BE_REPLACED 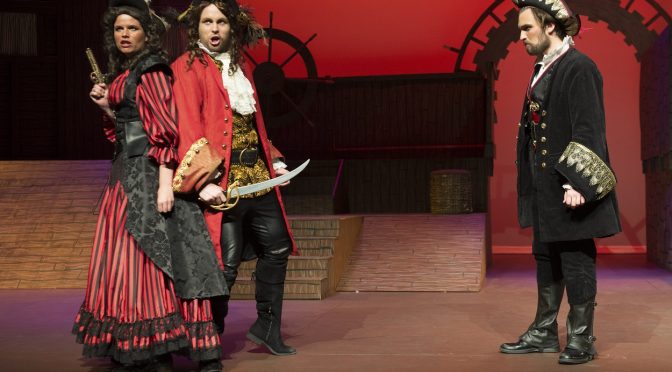 On a rocky beach in Cornwall … ahoy – there be Pirates!

Originally premiered 1879 it is one of the ‘Big Three ‘ of the Gilbert & Sullivan works – the others being HMS Pinafore and The Mikado.

Readers will probably be familiar with the Opera Australia version (Anthony Warlow as the Pirate King) or the Essgee version starring Jon English as the Pirate King. There also has been the all male version directed by Sasha Regan that toured here in 2012 from the UK.

Overall, this was a strong, traditional performance.  Musically and vocally, under the excellent direction of Rod Mounjed, this production was splendid. The Orchestra was in fine form and gave a beautifully multi layered finely nuanced performance. Mounjed conducted precisely and energetically.

Under Victoria Watson’s direction the pacing and timing was great. The choreography was tight and stylised, albeit that it, at times, came across a little stiff.

The set design by Bradley Hawkins was very effective. One half of the stage was the pirate ship, the other a  flight of stairs, a plinth, and a gargoyle like sculpture for the tomb in Act 2. There was a trapdoor for the Pirate King and for Ruth’s first appearance for ‘When You Had Left Our Pirate Fold ( the ‘Paradox ‘ trio Costumes were mid to late Victorian with bustles etc, for the ladies.

Our leading lady Mabel was excitingly sung by Sarah Arnold. I am not sure why she sat in a throne like chair to one side aloofly reading before her big first entrance?

Our darkly Byronic hero Frederic, ‘a slave to duty’, was terrifically performed by Daniel Verschuer, who was in fine voice.

As the dashing, charismatic Pirate King Chris Lewis had much fun swaggering and strutting around. His Oh Better Far To Live And Die  was joyous and exhilarating.

Ruth the Piratical Maid of All Work was given a strong performance by Zoe Arthur.

As vibrant and ebullient Major General Stanley, Mitch Bryson was magnificent. His breathless, tongue twisting, patter song I Am the Very Model of a Modern Major General, where he was gloriously resplendent in his imposing uniform brought the house down. In Act2 he is troubled and lamenting when ‘he thought he heard a noise. ‘ His bevy of daughters and chaperoning relations gave a terrific performance. Tall, hulking ,brooding Samuel was finely played by Joshua Knight.

Our Sergeant of Police was terrifically played by Toby Page, who was in fine, gravelly voice, lamenting, “A Policeman’s Lot Is Not A Happy One’ with his chorus of policemen.

Running time 2 hours 20 including one interval .