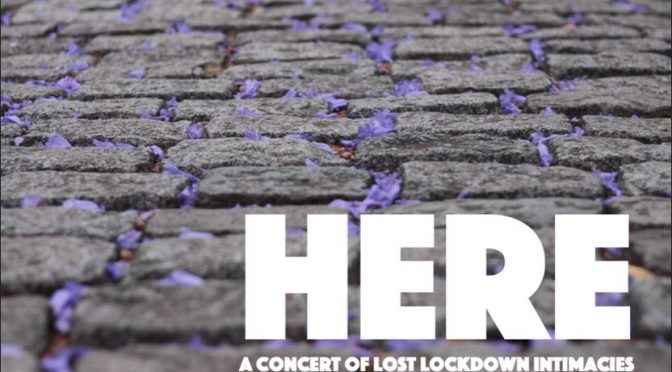 HERE is a concept of a collaboration of artists that is a concert of lost lockdown intimacies, a meditation on identity, locality and reconnection in the wake of isolation. These ideas are conveyed through music, words and visuals. During COVID-19 lockdown artists were isolated and needed to find a way to practise their craft, connect with other artists and then emerge from lockdown.

HERE is the result of a group of artists made up of musicians, composers, a poet and a visual artist applying their talents to a project encompassing connection, transition and physical places in a moment of time. Existing and new works of poetry and music were integrated into a cohesive concert experience.

The innovative music has its genesis in the classical tradition but with modern sensibilities. The highly skilled performers were Tristan Coelho on piano, Alicia Crossley on a variety of recorders, Emily Granger on the harp, and Andrew Smith on tenor and soprano saxophone. Nicole W. Lee performed her own poems and poems by Mkhululi Mabija and Sybil Kempson and visual artist Charlotte Fetherston provide images linking the music and poems. END_OF_DOCUMENT_TOKEN_TO_BE_REPLACED In this final concert of its 2013 season the Balmain Sinfonia was typically joined by a soloist, or in this case, two soloists. The playing of Mozart’s Sinfonia Concertante in E flat major K 364 was evidence yet again of this orchestra’s well directed ability as a sympathetic accompanist.

Fine exchanges of line between violinist Alistair Duff-Forbes and violist Charlotte Fetherston made the popular Mozart work a highlight of the first half, and perhaps the entire event.

Phrases were exquisitely shaped and exchanged between the soloists. Very good Mozart playing emanated from the whole stage.

Alistair Duff-Forbes’ work  included a rewarding range of tone colours, especially in shifts to the low register. Charlotte Fetherston’s  viola part was fluid. She created  luscious vocal-like Mozartean drama which was cleanly mirrored by the orchestra.

Mendelssohn’s Symphony No 1 was a meaty end to the afternoon. The large forces dived into the layers scored by the master nineteenth century orchestrator. The first, third and fourth movements especially bristled with energy from all sections. The final climax was a fitting cadence for a busy year.

The final Balmain Sinfonia concert for the year was performed at the Macquarie Theatre on Sunday 8 December 8.