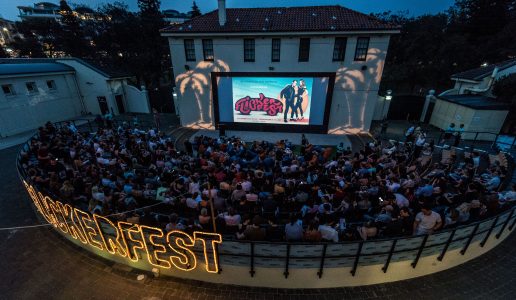 Film lovers flocked to Bondi Pavilion on Friday night for the opening of Sydney’s star-making short film festival which is now in its 29th year. Guests joined for the line-up of premiere films drawn from 200 shorts (selected from over 3,500 entries this year) screening in competitive programs, including International and Best of Australia. Some of Australia’s best – known acting faces were amongst the opening night crowd. Following the screenings, guests headed up to the balcony to kick up their heels overlooking Bondi Beach and munch on delicious rice paper rolls and pizza.

The screenings selected were innovative, thoughtful and entertaining. The film makers incorporated great humour, horror and drama into their brief creations.

The evening opened with a Korean animation, DIVISION SERIES, in which a Prime Minister goes into a takeaway chicken shop, but the chicken is all sold out. At another table, presidents from other countries start playing cards to win the last chicken basket. I thought the interplay and the expressions on the characters faces was priceless. Writer Ho Kwon Kim is to be commended.

Chloe Sevigny has written and directed WHITE ECHO, a horror film with Carla and her girlfriends playing with a Ouija Board. The atmosphere and shocks are created by a claustrophobic house and location, ghosts and a wonderful soundscape. The dance scene is powerful and electrifying.

Hunter Page-Lochard and Carter Fred Simpkin’s CLOSED DOOR is a disturbing and haunting exploration of loss. Regaining consciousness in a car wreck, a young father finds that his daughter is missing.

Director Ben Brand and writer Andy Weir’s RE-ENTRY is a thoughtful and challenging film about human interconnectedness and has an interesting perspective on re-incarnation and the after-life. When a man (who could be everyman) dies in a traffic accident and gets into a conversation with a wry and quirky God, he is presented with a simple but insightful view on what it means to be a person.

Gabriel Abrantes’ THE MARVELOUS MISADVENTURES OF THE STONE LADY is a little gem of a film. It is a very funny film about personalities, art and revolutionary struggle. Tired of being a banal architectural ornament, a sculpture runs away from the Louvre to confront real life on the streets of Paris.

Lydia Rui’s THIS PERFECT DAY is a well structured film, with minimal dialogue that nevertheless says a lot about families and relationships.

Florence Keith-Roach’s A FAMILY AFFAIR is an excellent comedy. Annabelle wakes up in a stranger’s bedroom on her 30th birthday. She thinks her day can’t get any worse but then Bernard walks in. It is cringe worthily awkward and then it gets worse. Florence Keith-Roach story is beautifully outrageous as she takes us down some unexpected rabbit holes.

The Flickerfest short film festival continues until January 19th at Bondi Pavilion before hitting the road and travelling interstate across 50 dates and various locations. It is highly recommended and a great opportunity to experience some innovative short films. 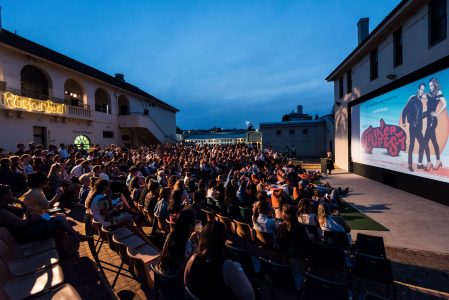 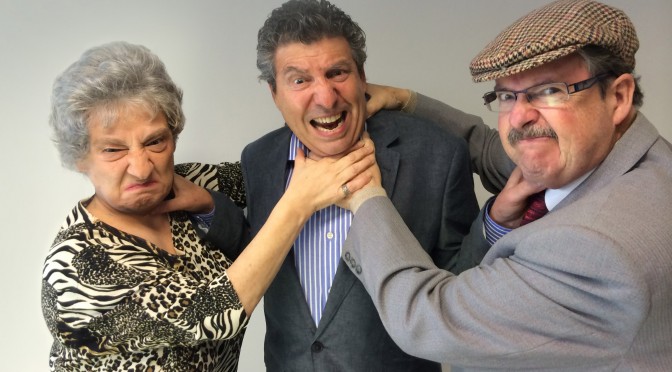 Initially we meet the great-grandparents Mania and Velvel Pszeszekowski, Holocaust survivors, who are still trying to understand the ever-changing world. Together they explain how they understand the microcosm of the differing attitudes in the behaviour of their son Allen, and their grandchildren and great grandchildren. END_OF_DOCUMENT_TOKEN_TO_BE_REPLACED 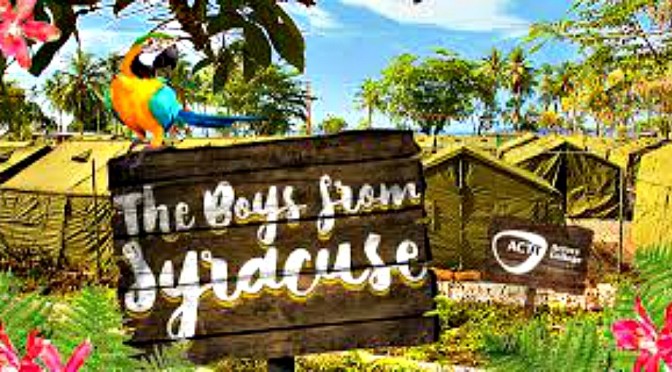 The Actors College Of Theatre and Television (ACTT) presented the musical comedy THE BOYS FROM SYRACUSE, directed by Stephen Lloyd Helper, the final show of six unique student productions this year, that have elegantly showcased the talents of their graduating Advanced Diploma acting students.

This is a revival  of  Rodgers and Hart’s entertaining musical adaptation of Shakespeare’s COMEDY OF ERRORS that was first produced back in 1938- book by George Abbott, music by Richard Rodgers,  lyrics by Lorenz Hart. END_OF_DOCUMENT_TOKEN_TO_BE_REPLACED 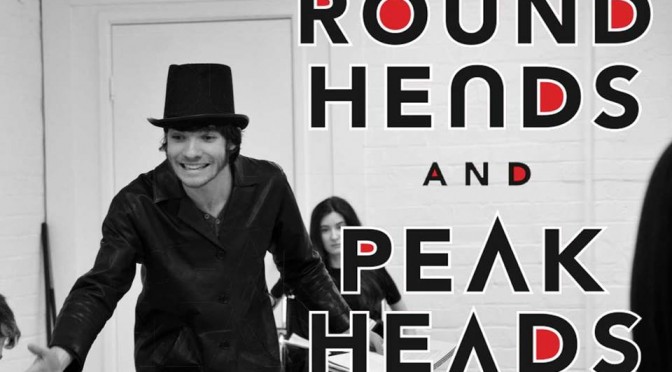 The play’s tag line is ‘money calls to money’. Brecht described his socialist play as ‘a tale of horror’ and the confronting anti-communist/fascist dialogue has all the subtlety of an exploding atomic missile.        END_OF_DOCUMENT_TOKEN_TO_BE_REPLACED 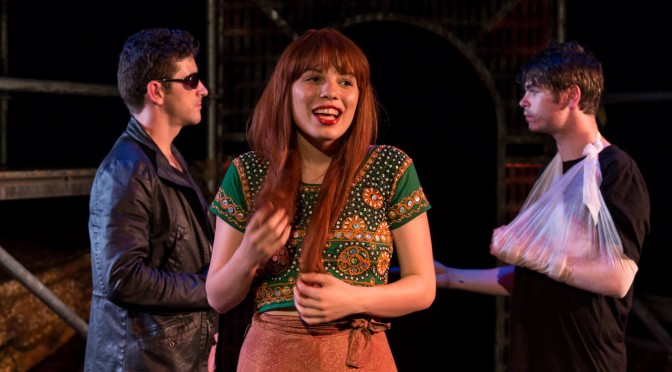 Above are production images from last month’s Actors College Of Theatre and Television (ACTT) production of Toby Schmitz’s LUCKY, at Bondi Pavilion. LUCKY was the third play in their six play season of student productions.

Lucky steals $12,000 from Paula the female mobster, and when she doesn’t return the  money she justifiably receives a broken arm. Definitely the quick way to find yourself very dead!

A large ensemble cast vividly brought the show to life as we met the mobster underbelly of the streets of Sydney. Characters that we came across included the Gibbering Woman, Bartender, Backpacker Girl, Dealer, Busker, Clubette, Bouncer, and Enforcer.  END_OF_DOCUMENT_TOKEN_TO_BE_REPLACED 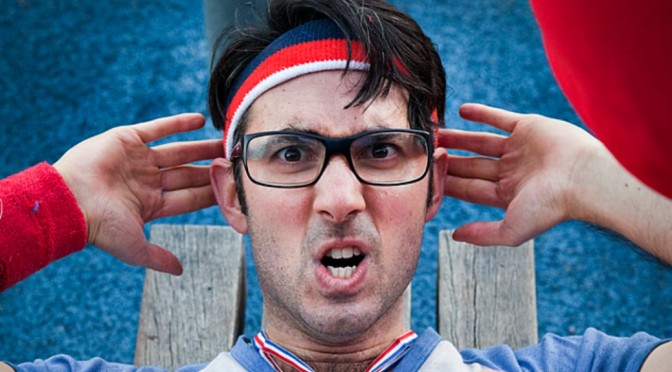 Adriano Cappelletta showcased his ability to tell a good story, his fine acting talents, a good sense of comic timing and a strong voice with his entertaining solo show, ADO SAVES THE GAY WORLD.

Ado’s show is built around his search for love, and in particular, his romance with a princely sort of a guy called Felix. He charts their journey from the time they meet, exchanging glances and then phone numbers, when Felix walks across a beautiful park on a sunny day as drama teacher Ado is teaching his enthusiastic, mischievous young students to the relationship’s eventual demise.

My main enjoyment with Cappelletta’s show was found in  his quick and clever switching and alternating between the two characters, the very polite, laid-back and measured Felix and his much more temperamental and moody persona.

Adriano Cappelletta’s ADO SAVES THE GAY WORLD played the Bondi Pavilion Theatre as part of the Horse’s Mouth Festival for one show only on Tuesday December 10.

IMAGE: The talented Adriano Cappelleta performed his one man show ADO SAVES THE GAY WORLD at the Bondi Pavilion