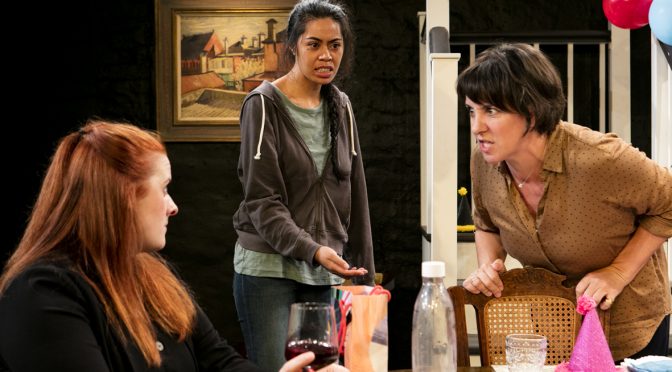 “I’ve loved to put people in the same room who are obliged to be together, but shouldn’t be together and don’t want to be together”, wrote David Williamson in his program notes for ‘FAMILY VALUES’, adding, “Humans being humans, this inevitably results in drama and comedy.”

This has been Williamson’s recipe for success over 50 years as a playwright, ‘FAMILY VALUES’ being one of his most enjoyable.  This play, Williamson says, will be his last, along with, ‘Crunch Time’, which will play at the Ensemble Theatre in February.

Compliant and conservative retired judge, Roger (Andrew McFarlane), is turning 70.  He and wife Sue (Belinda Giblin), have decided to throw a party and invite immediate family members.  Roger grapples with his party balloons blowing and tying them up in nervous anticipation of the chaos about to unfold.  All he wants is to reminisce. Sue keeps him in line, totally in control. She has spent time as a social worker, thus experiencing a very different view of the world than her husband.  A more empathetic one. END_OF_DOCUMENT_TOKEN_TO_BE_REPLACED 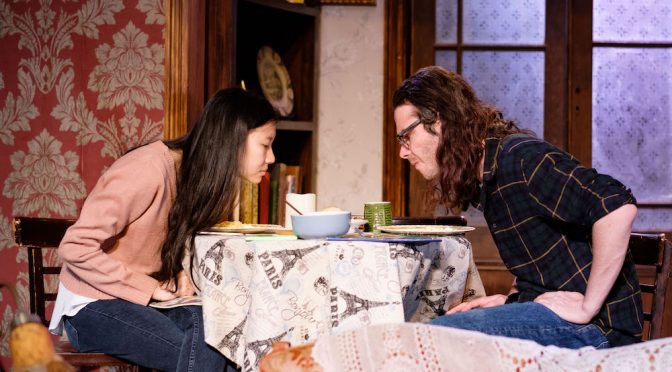 First things first. A caveat. This is a very long piece. Three and a half hours with two intervals.

JOHN is a four hander. Elias and Jenny stop off at a bed and breakfast in famous Gettysburg. They arrive late and are greeted by  the eccentric manageress/host, Mertis.

They are shown their lodging for the night. The walls are paper thin. The couple bicker and Mertis picks up on the tension between them and tries to be a calming influence

It isn’t long into their stay that Mertis introduces Jenny to her good friend the blind,  eccentric Genevieve,

Through the play we closely follow the interactions between these unusual characters.

My take on the play. There is a haunting, spooky darkly comic quality that emanates from this work. The Bed and Breakfast place with its assortment of dolls and accoutrements has this sense about it. Mertis talks often of her husband George who  is supposed to be living with her but we never do see him.  We wonder what the real story is?!

Then there’s Genevieve who believes her husband still lives inside of her though they parted a  long time ago. In the living room Jenny finds the exact same doll that she had when she was a child. The doll had very lifelike qualities for her growing up  and she is now reminded of them.

Gettysburg is of-course the town where President Lincoln  delivered his famous address during the American Civil War.  It is one of the reasons that Elias and Jenny have stopped the night there. Elias goes off exploring the town and its rich history whilst the women spend time together.

Shuang Hu played the easily rattled Jenny. with James Bell  playing her very guarded partner Elias who feels ‘the pinch’ of being surrounded by a house of women.

Mention has to be made of Jeremy Allen’s intricately  detailed set and impressive costume design.

The stage was well lit by Veronique Benett. 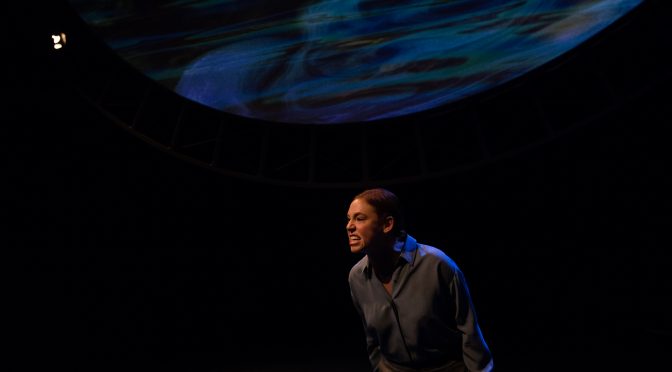 Echoes of school? Of P&F meetings where a quick scan of the agenda sees the acronym STEM leap at you and you know, you just know, that the Arts are going to get screwed.  Not here.  EAR TO THE EDGE OF TIME is STEAM storytelling, meticulously researched, rigorously interrogated and crafted with a Whovian blend of art and science and contemporary philosophy.  With a narrative inspired by real events and gender inequality in the hardsciences as the imperative,  Sport for Jove, director Nadia Tass and writer Alana Valentine have constructed an engrossing and relevant treatise about humanity’s relationship to the scholarship of factual and creative disciplines.

Martina is a PhD candidate working in the field of neutron star physics.  Enter Daniel, a poet.  These two have been buffeted together by invisible forces.  They have separately accepted an offer to collaborate on a poem for a collection inspired by the sciences.  The project is driven by Physicist Prof Geraldine Kell-Cantrell and Daniel has travelled to Parkes and Ubered out to the dish to meet with Martina.   Making first contact is not going to be easy as she squawks her reluctance to leave her work in the dark:  a revelatory discovery is within her grasp and her supervisor, Steven, is not one to interfere.  Not actively anyway. END_OF_DOCUMENT_TOKEN_TO_BE_REPLACED 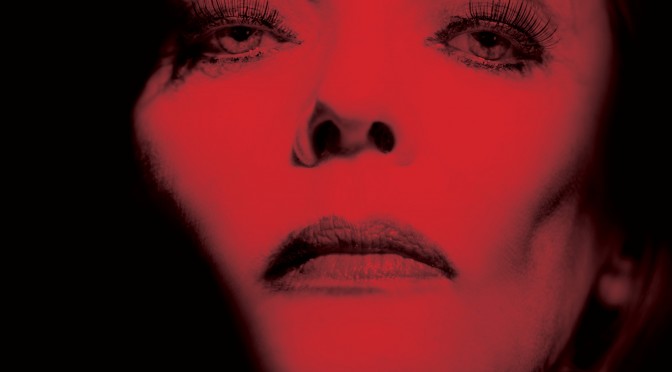 BLONDE POISON is a remarkable one-woman play about beauty, treachery and the high price of survival, starring Best Actress Nominee at the 2015 Sydney Theatre Awards, Belinda Giblin. Back by popular demand for a strictly limited season, see one of Australia’s leading actresses like you’ve never seen her before at the Studio theatre, Sydney Opera House from 28 April. Tickets are on sale from 22 February.             END_OF_DOCUMENT_TOKEN_TO_BE_REPLACED 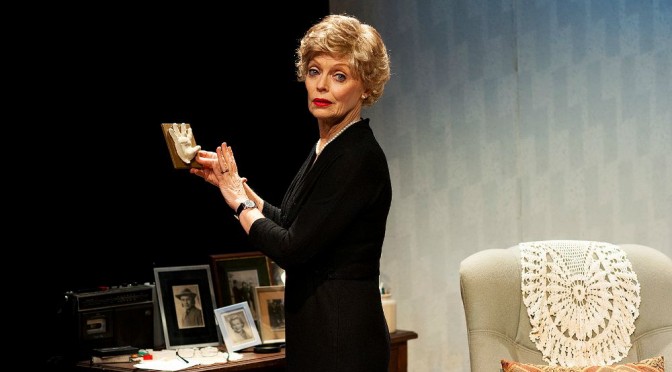 In return for her efforts, the Nazis guaranteed her own safety and that of her parents. Goldschlag did survive the war, her parents were not so lucky- the Nazis broke their promise to her and they were deported to a concentration camp where they perished. She went into hiding at the end of the war but was found and arrested by the Soviets in October 1945 and sentenced to ten years’ camp detention. END_OF_DOCUMENT_TOKEN_TO_BE_REPLACED 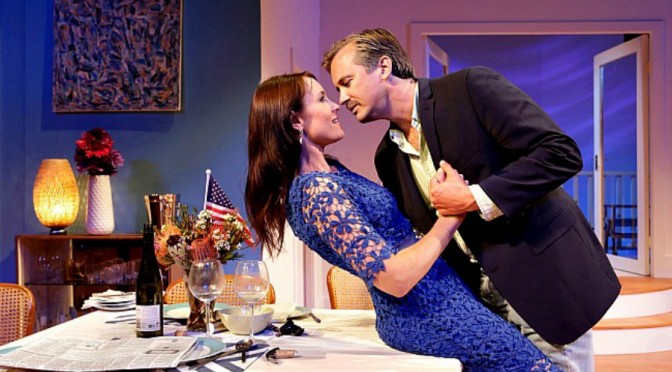 The starting point to Nick  Enright’s DAYLIGHT SAVING is unexceptional. A forties something North Shore married couple, Tom and Felicity, are struggling to find time together. Tom, a high profile sports agent, is always travelling overseas to cater to the whims of his clients. He is about to head off again and  Felicity- nicknamed Flick- chides him, once more, with feeling.

This latest  revival of one of Enright’s most  popular works, first performed at Kirribilli’s Ensemble theatre in 1989, is given a  warm, polished, vibrant production by Adam Cook who was a close friend of the late, master Australian playwright. END_OF_DOCUMENT_TOKEN_TO_BE_REPLACED 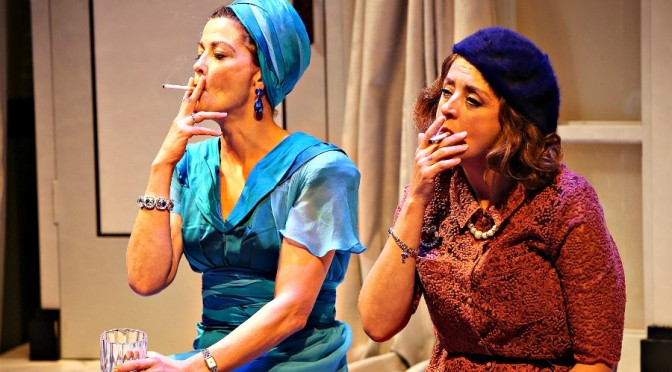 Both the women arrive true to form. First Bette arrives and is so rattled  by Skip, Bette’s house boy, not recognising her, that she gets into the whisky very early on…Then Joan strolls in, in a resplendent blue dress, having managed to get through her crowd of fans. END_OF_DOCUMENT_TOKEN_TO_BE_REPLACED