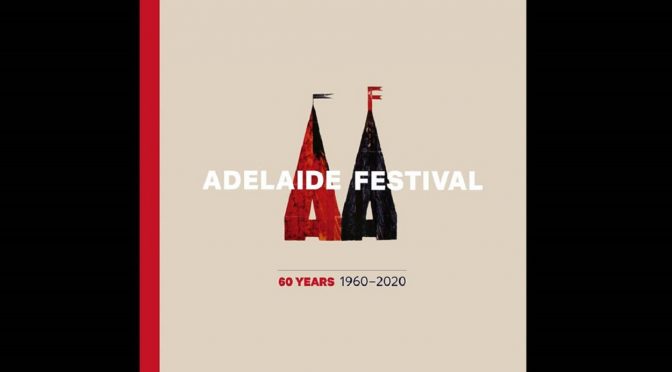 The Adelaide Festival , or Festival of the Arts as it was originally known , has now been going for an amazing 60 years.

This is a beautiful, large and heavy coffee table book. It is divided into nine ‘chapters’ and is lavishly illustrated throughout with both black and white and colour photos. At the back is a tabulation of sixty years of posters advertising the Festival, then a list of short biographies of the various contributors. It is not an archival, chronological record of the Festival but rather a collection of memories and photos.

The editor, Catherine McKinnon, is an award-winning novelist and playwright. She studied theatre performance and cinema at Flinders University. Her play ‘Tilt’ was selected for the 2010 National Playwriting Festival, and As I Lay Dreaming won the 2010 Mitch Matthews Award. Her short stories, reviews and articles have appeared in Transnational Literature, Text Journal, RealTime, Narrative and the Griffith Review.

McKinnon, along with four other writers, won the Griffith Review Novella 111 Award, 2015, and her novella ‘Will Martin’ was published by Griffith Review in October of that year. Her novel ‘Storyland’ was shortlisted for the 2018 Miles Franklin Award, the Barbara Jefferis Award and the Voss Award.

Contributors (over fifty of them!) range from previous Artistic Directors, performers in the Festival (some have been both) reviewers , lighting designers, publicists and other Adelaide luminaries.

The book looks at the problems of programming a Festival , ticketing the Festival, performing in a Festival and the massive successes , the dangerous accidents and near misses in performance. It also looks at the interconnectivity of people connected to the Festival , and we learn about various productions and their links to the history of Australian Dance Theatre,  the Australian Ballet,  Circus OZ, Bangarra, the Sydney Symphony etc.

Other passages are very personal : We read of Jim Sharman’s extended sojourn with the Festival since 1964 , how Akram Khan was a teenage performer in Brook’s ‘Mahabharata’ and has become Artistic Director of one of the world’s major dance companies , Annabel Crabb driving members of the Frankfurt Ballet to Maslin’s Beach, Rachel Healey being transfixed by Phillipe Genty’s puppets as a child.

In the opera world we learn that several productions as part of the Festival were the first performances of that work in Australia. WOMelaide, Writers Week and Artist’s Week are also part of the memories. There is also an article included by former SA premier Don Dunstan , who was a major supporter of the arts

It is fascinating to see that some events/productions are consistently mentioned as magical experiences – eg the 1980 Water Tunnel , Pina Bausch and her company visiting , Peter Brook’s Mahabharata and the opera Voss to name just a few. The inclusion of indigenous content in the Festival is also examined. The intersections of the various people exemplify how the Festival has become a major nucleus for the arts in South Australia.

The book asks – why Adelaide? Does Adelaide and its Festival have its own distinct personality? Can a performance change your life?

The Festival is both of and for the people – there is a great quote by its founder,Professor John Bishop OBE – to whom the Festival’s aim is to ‘ To do the extraordinary … to make possible that which otherwise would not happen ‘.

As Patrick McDonald says ‘ Diversity, inclusivity and creativity have been the consistent hallmarks of sixty years of Adelaide Festival openings. All that remains to be seen is what future fusions of imagination and technology will bring to its table’ .To quote Barry Kosky ‘ Long may it reverberate and rejoice’.