There must be a temptation to use real product on the set of PERMISSION TO SPIN from Apocalypse Theatre Company in association with Red Line Productions.  This is a manic 65 minutes and whatever hurtles the three person cast through it must be illegal.  And I want some!

In a shiny yet nondescript office we meet Martin and Jim.  Jim is the agent for recording phenomenon, Cristobel, whose music is about to win Children’s Album of the Year.  The reason that Cristobel is going to win the aforesaid award is down to the spin skills of Martin who has made her character, Miss Polkadot a household (read happy meal figurine) name.  His methods are obvious.  He brings the menace down on poor, coked up, manic Jim.  Cristobel on the other hand has been mouseily manipulated by this harrying double act but is on the roar to becoming her own person.  Consuming will happen, bullying will occur and disorder will ensue.  END_OF_DOCUMENT_TOKEN_TO_BE_REPLACED 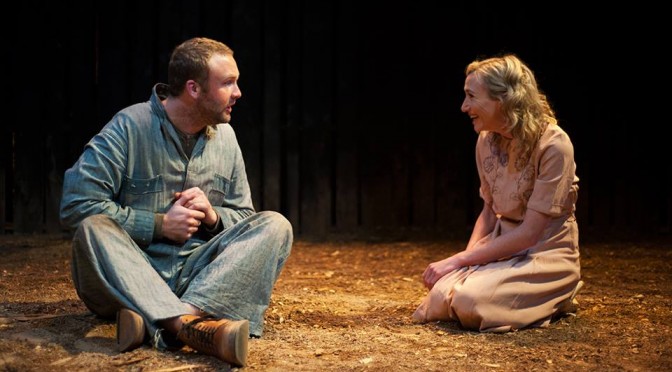 Adapted  in 1937, by  Nobel prize–winning author John Steinbeck from his novella written the same year, this wonderful play tells  the story of George Milton and Lennie Small, two displaced ranch workers in California, searching for a job during  the Great Depression.  The title comes from Robert Burns perhaps most used  quote, “The best laid plans of mice and men often go astray.”

You know from the start that this complementary friendship between the intelligent but uneducated George and the gentle, developmentally challenged  giant, Lennie is headed inexorably toward disaster. (The term ‘politically correct’ was not invented in 1937 and Steinbecks’ novella attracted a lot of criticism for using words like “Dumb”  and Nigger!).

Dread and trepidation accompanied me as I took my seat last night in the Reginald Theatre down the stairs  at the Selmour Centre. The idea of not controlling our destiny was echoed again in the program note about, “we do not take a trip; a trip takes us.”

The moment we stepped into the theatre space we saw a very natural relaxed character playing slide guitar blues in the style of a panhandler  straight out of the great depression. Then the unlikely pair of road travellers, George and Lennie, enter and put us at ease naturally with nicely crafted characters, regular humour and warmth that transported us with them to the promised land of the farm up ahead and the possibility of their own little ‘passle’ of land, a safe haven where Lennie can stay out of trouble and George can relax.

The stage then erupts with raucous farm hands transforming the space into the bunkhouse to the accompaniment of that natural guitar again and we know that we’re in good hands- but  it’s gonna be a bumpy ride to drama and pain!

The cast are superb in every role. Andrew Henry delivers a sensitive characterisation of Lennie, a role which  it  would be so easy to overplay and lose empathy. Anthony Gooley is a wonderful, caring George. (I saw those tears at the end.)

John McNeil, Laurence Coy, Terry Serio, Charles Allen and Tom Stokes were all splendid and natural in character and performance. I make no apologies for reusing the word ‘natural’  to describe everything about this outstanding production.

We saw a simple but effective design from Michael Hankin,  (I loved his design of Dirty Rotten Scoundrels),  enhanced by the lighting design from Sian James Holland and Nate Edmondson.

Iain Sinclair’s direction elevated this classic script  to  unusual  heights, the use of naturally occurring  sound in the background created atmosphere, and the audience’s commitment was palpable. I heard sighs and gasps at all the right times.

The last scene led to nearly half a minute of stunned silence, then the rapturous applause exploded. Then we all trooped out, moved but satisfied .. naturally.

A Sport for Jove production, Jon Steinbeck’s OF MICE AND MEN is playing the Reginald theatre at the Seymour Centre until the 1st August. 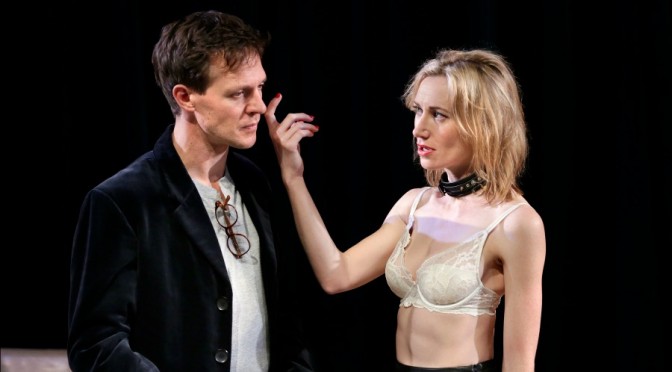 It is only a very brief time after we have taken our seats and the house lights have gone down that we are just taken over by the world of VENUS IN FUR.

The play’s action take place in a theatre rehearsal/warehouse space. The main features are a writing desk, (alongside is a small table with a kettle on top), and an expansive chaise lounge close to the centre of the stage.

We hear sounds of a wild electrical storm taking place outside- portentous that plenty of drama is also going to take place within these walls.

Our attention is drawn to Thomas, a jaded theatre writer/director who is trying to cast an actress for the lead role in a new play that he is going to stage, his adaptation of a nineteenth century S and M novel.

He is having a rough time of the process. We hear him on the phone to a friend saying that none of the actresses that have come through so far have been any good and that he doubts that he will find a suitable actress.

And then in through the door walks Vanda, a startling, attractive woman wearing a brown trenchcoat and carrying a mangled umbrella She has come to audition for the part and is coming on very strong.

At first Thomas is contemptuous of Vanda. He just wants her to leave. Vanda, however, won’t take no for an answer. In the end Thomas relents and an audition of sorts begins to take place.

As they start working on the script, we soon cotton on that there is much more to Vanda than she is revealing. How comes she seems to know so much more about the script than she should? Further, how come she knows so much about Thomas’ private life?

Where is this going? Brilliant American playwright David Ives has well and truly hooked us in….How is this going to play out?!

There is so much to this piece, so many different allusions and ‘ripples’ going away everywhere, that it would take at-least a few visits to take it all in.

Grace Barnes’ direction is flawless. She wins good performances from Anna Houston and Gareth Reeves. They totally inhabit and plumb the depths of their complex, many sided characters. Anna Houston employs a kind of creepy walk to personify her character.

Gareth Reeves’ Thomas comes across as an urbane, sophisticated thespian and then he shocks us by delivering a vicious, sexist diatribe Vanda’s way.

Barnes’ creative team do great work: Sian James- Holland’s lighting, Jessica James-Moody’s soundscape are both effective. As is Mel Page’s set and costume design. This is one of  these pieces where both actors are constantly changing garb which sometimes also changes the way that they behave.

Recommended. Easily one of the most exciting shows this year so far. VENUS IN FUR is playing the Eternity Playhouse until the 5th July. 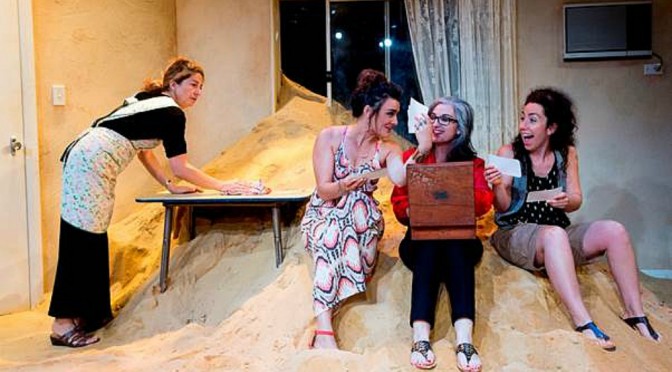 In time for Mardi Gras, the Griffin Theatre presents Sydney playwright, Donna Abela’s award-winning play, Jump for Jordan. It is more than a ‘coming out’ play. It depicts the experience of being ‘caught between two cultures’ common to second-generation Australians.

An archaeology student, Sophie leaves home at 21 unmarried, shaming her traditional Jordanian mother. She moves in with fellow archaeology student, Sam, her Aussie girlfriend. Six years later, losing sleep, and petrified of the judgement of her visiting ‘mad Arab’ Aunty Azza, Sophie is forced to lie about her life, her career and the existence of Sam. She may be also lying to herself.