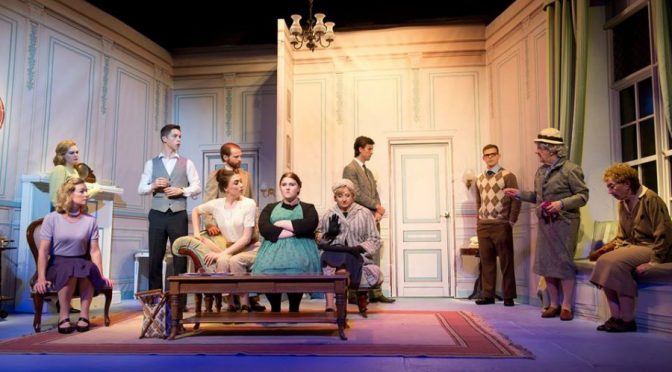 You can’t go wrong with Agatha Christie. Well I suppose you could. But not if you are the Genesian Theatre Company. This is their metier. A MURDER IS ANNOUNCED is gripping, stylish entertainment. Adapted by Leslie Darbon, the play is from 1987 but it retains all the period elements that audiences require of a Christie Mystery. The Genesians have assembled an excellent cast, put them on a lovely set and costumed them superbly.

A unusual notice has been put in the village paper of the small English spa town of Chipping Cleghorn. It announces a murder will be committed at ‘Little Paddocks’ on Friday evening at 6:30. The household see it as rather a joke but neighbours and villagers are sure to drop by around about then. And no one is going to keep a certain Miss Jane Marple, in the village to take the waters for her rheumatism, away from the possibility of a delicious mystery.

And delicious it is. Owing much to  the way the climax has been adapted by the playwright who has wisely removed some of the novel’s more hysterical events such as an attempted drowning in the kitchen sink and the Snugglepuss redolent, Miss Murgatroyd: yet kept the period flavour which is required to keep Miss M in her place and time. END_OF_DOCUMENT_TOKEN_TO_BE_REPLACED