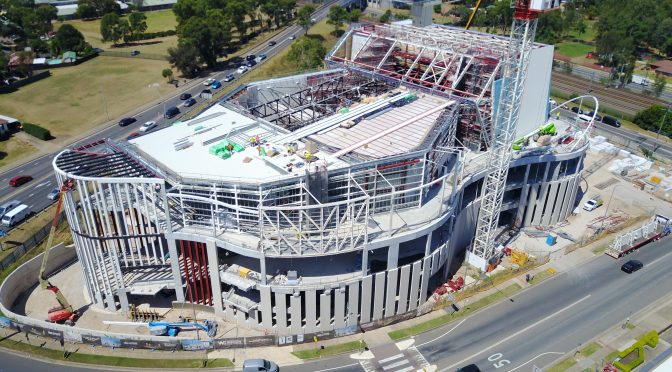 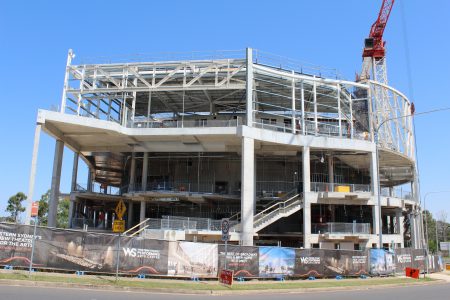 Originally launched as the Western Sydney Performing Arts Centre, the Sydney Coliseum Theatre, a $100million theatre development located at West HQ in Rooty Hill, is a magnificent new addition to Greater Western Sydney’s cultural landscape and to Australia’s live performance industry.  On track for its huge gala opening in late 2019, the Sydney Coliseum Theatre shares its name with a distinctive group of the world’s grand theatres in London and New York amongst others.  The reveal precedes a series of exciting announcements planned for June about the headlining acts for the theatre’s grand opening in December 2019.

West HQ Chief Executive Officer Richard Errington today formally revealed the name and its significance for the region saying “The Sydney Coliseum Theatre, West HQ has been a 10-year journey for us from inception to build and it’s amazing to see our vision coming to life.  We strongly believed that Greater Western Sydney deserved a truly world-class theatre and we are excited to be delivering a venue of which our whole city can be proud.  The West HQ destination has been undergoing incredible transformation over the past year with the addition of a series of exciting dining brands that will make West HQ home including Chu by China Doll, Pizzaperta by Manfredi, Steak & Oyster Co by Sean Connolly, Chur Burger and Gelatissimo with other exciting dining choices to be announced.  With the addition of Sydney Coliseum Theatre to our existing businesses we have become the leading entertainment, fitness, lifestyle and accommodation destination in Greater Western Sydney.”

In anticipation of opening program announcements, the site has been a hive of activity with the industry’s top producers and promoters visiting the site, along with Australia’s major arts companies, many of whom have been quick to support opportunity coming to the region.

Sydney Coliseum Theatre Executive Director, Craig McMaster added “We are pleased to be answering a need to create an architecturally beautiful and technically superior lyric theatre in Western Sydney.  Sydney Coliseum Theatre will stand proudly amongst the great theatrical and entertainment venues of the world and will offer both audiences and performers a welcoming, premium experience.  We’ve had an overwhelmingly positive response from producers and promoters who have been blown away by the scale, quality and amenity of the building, many of whom have already secured performance dates in 2020.  We look forward to soon announcing our opening shows and foundation partners – a select group of Australia’s leading producers and organisations that share in our vision of bringing the best in entertainment and the arts to Greater Western Sydney’s 2.3milllion residents.”

The state-of-the-art venue will be able to present full-scale Broadway musicals, symphony orchestras, ballet performances, live contemporary music, comedy and family entertainment.  Equipped with a full fly system, unique retractable seating and outstanding sight-lines, the theatre will be the first venue in Greater Western Sydney capable of hosting productions previously only staged in the CBD.

Following her recent tour of the venue, Chief Commissioner of Greater Sydney Commission Lucy Turnbull, commented “I really enjoyed my visit to the site of the future Sydney Coliseum Theatre.  It will be an important and much needed additional cultural asset to Western Sydney.”

The Sydney Coliseum Theatre’s world-class capability and economic significance was also called out by David Borger, Director of Western Business Chamber, who commented “Western Sydney is crying out for more theatre and arts space.  We know that our residents enjoy the arts and according to our joint report with Deloitte on the cultural arts economy, Western Sydney households spent $232 million directly at museums, art galleries, live theatre, music concerts and cultural activities in 2011.  By 2036, they will spend more at cultural venues and events than households in Eastern Sydney, so there is certainly a significant appetite for more local and iconic arts facilities in the region.”

Julius Grafton, Editor of CX Magazine, the entertainment industries’ leading technical magazine, of a recent visit said “What we saw today surpasses anything we had heard about, and sets a new standard.  Hyperbole this is not.  It’s very likely that once completed it will be the best 2,000 seat lyric theatre in Australia.  It’s fair to say this is simply an amazing project, built without a single dollar from any government.”

The Sydney Coliseum Theatre is scheduled to open to the public in December 2019.