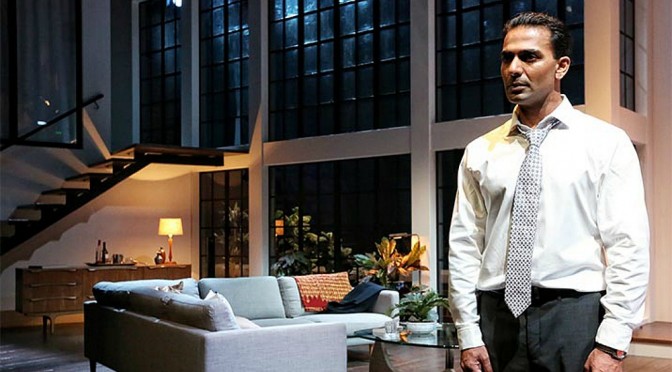 Playwright Ayad Akhtar won a deserved Pulitzer Prize for this play in 2013. It is in part based on what occurred to him at a dinner party a few years earlier.

I was on the edge of my seat as my mind was bombarded with a cavalcade of ideas and concepts involving Islam, Islamic aesthetics, and the West, Velasquez art, pride and betrayal.

Like Othello in his finery we find Amir, played by Sachin Joab, surveying his kingdom, an upscale split level Manhattan apartment- a striking set by Edith Gadsby, wearing a $600 shirt and an expensive suit. Amir is a successful corporate, this overwhelming pride, his hubris is that he is living the American Dream complete with a blonde Desdemona, his wife Emily, played by Sophie Ross. We just know that Amir is going to fall but the downward tragedy is not as linear as a Shakespearean tragedy.

Emily is an aspiring artist whose pale skin and blonde hair is in stark contrast to Amir’s dark skin. Like Desdemona she adores her husband and Amir loves her. Emily is described later in the play as a trophy wife for a Muslim man climbing the corporate ladder, in this case a legal firm whose partners are Jewish. Amir believes that by denying his religion and heritage and relying on his cleverness and confidence he will be able to achieve the American Dream.

Emily insists on painting a portrait of Amir based on a painting of Velasquez’s Moorish slave, Juan de Parega, dressed in Spanish nobleman’s collar.She loves the painting and how it conveys her love for Amir, his darkness and otherness. She naively urges him to embrace his otherness. Unlike a malevolent Iago, Amir’s nephew, Abe Hussein, a radicalised young Muslim is the unwilling instrument in Amir’s downfall. He urges Amir, with his wife support, to be present at the trial of a suspected terrorist. Amir is photographed and labelled by the press as being part of the defence team. Once again Amir is confident that he can correct the paper’s mistake.

Meanwhile a dinner party has been arranged at his apartment for good friends Isaac, a Jewish Art dealer, played by Glenn Hazeldine, and his Afro-American wife, Jory, who works with Amir. Emily asks Isaac to hang her paintings based on Islam art whilst Amir wants to form a new legal firm as he suspects his current Jewish firm will not promote him. In a very non-Islamic way Amir gets a bit drunk and with great lack of inhibition states that he had a feeling of triumph and pleasure at the time of the Twin Towers attack. Like the dinner party in Who’s Afraid Of Virginia Woolf the dinner party unravels…

I was on the edge of my seat for the play’s entire ninety minutes. As well as the overarching issue of the denial of one’s true self and the West’s inability to fully embrace well meaning Muslims, it raises issues which I am as a child of non-English speaking parents am aware of. In Australia, in America, the latest wave of a certain Ethnic group is always treated as a pariah thus facilitating the previous group’s inability to integrate into general society. In  a painting one can see a noble Moor as a an angry slave, and this shows how misreading even a painting can lead to disastrous effects. Also the play is about how a conflict a world away in the Middle East can surface menacingly in New York.

As well as extracting skilled performances from her cast, director Sarah Goodes also keeps the play moving at a subtle yet fast pace that see the ninety minutes fly past unnoticed.

DISGRACED is a powerful play, as masterful riff on Shakespeare’s tragic heroes which elucidates many issues which are testing us all today.