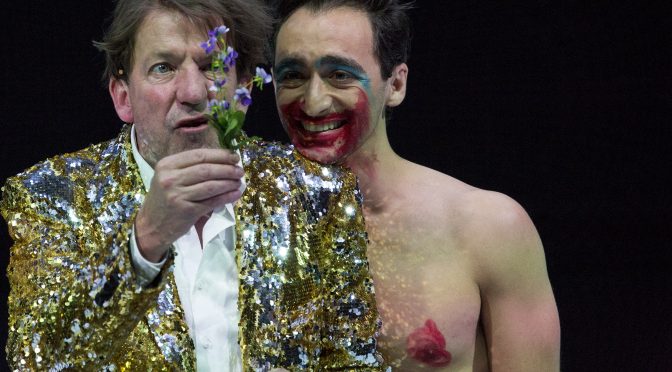 This much loved Shakespeare play features one of the most lush, fun and fantastical worlds to ever grace a stage.

In his note for the program, Andrew Upton described ‘Midsummer’s’ as, ‘everyone’s go to for Shakespearean fun’. With Kip Williams current revival, parents thinking of bringing along their kids to see the show will be able to feel confident that the night will be a success.

Williams wins good performances from a large cast. My favourite performances – Robert Menzies was outstanding in the dual roles  of  Athens leader Theseus and Fairy King Oberon. Menzies, with his superb diction and gestures, is surely one of this country’s finest Shakespearean actors. The ever spritely Paula Arundell matched Menzies well as Queen of the Amazons, Hippolyta and Fairy Queen Titania.

Matthew Backer excelled as the mischievous Puck, one of the theatre world’s dream roles,forever creating mayhem and then remedying it.

My pick from amongst the Mechanicals was the ever reliable and always vivacious Susan Prior as Peter Quince and Josh McConville was just so good as Nick Bottom.

My favourite scene – I suspect that it will be the favourite of many – is when the Mechanicals perform their tragedy Pyramus and Thisbe for the King and Queen and go into their extended  death scenes. Enter from stage left a paintball machine, and the said actors are dutifully sprayed with paint, much to the audience’s mirth.

The production makes some interesting choices. Williams and his set designer Robert Cousins choose to keep most of the stage space free for the performers. The stage was bathed in bright white with the stage floor white as were the surrounding walls.  Mini ‘sets’ were  ‘wheeled’ in for use with the scenes with the Mechanicals. Their  choice worked well…the scene where the youngsters leave the city and ‘break out’ in the forest was electric, as we see them run back and forth across the stage- as if in a dance performance – in search of the one they desire.

Williams bookends the production with extracts from one of the classic songs of summer – the Porgy and Bess number Summertime, a more than appropriate choice for the Bard’s midsummer masterpiece.

Kip Williams’ creative team contribute quality work. Damien Cooper lighting design is excellent and adds so much to the play. I found composer Chris Williams’ work particularly effective, underscoring and commentating on the action well. Alice Babidge’s costumes were a highlight, the sequinned jackets which the  King and Queen wore were stunning as were the costumes worn by the fairies.

This is a wondrous dream that one simply doesn’t want to end. Recommended, the Sydney Theatre Company’s production of A Midsummer’s Night Dream is playing the Drama Theatre, the Sydney Opera House until October 22.

A final note. As part of their program for next year the Sydney Theatre Company, via the State Theatre Company of South Australia production, is putting on a revival of THE POPULAR MECHANICALS, Keith Robinson and Tony Taylor’s comic masterpiece which plays out an after-life for the quirky Mechanicals. The production will star Amber McMahon. Should be well worth seeing.