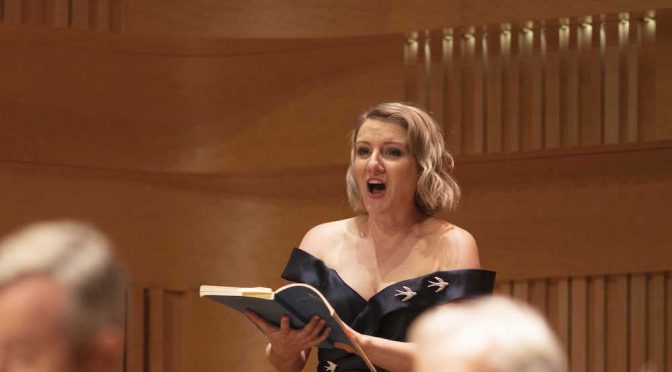 This was an exquisite and rare event, engaging Bach’s masterful two hour long St John’s Passion, mixed with new compositions by Joseph Twist and Brooke Shelley. The audience proved to be deeply delighted with this presentation, and rightly so.

There is a long standing debate about the relationship of religion and Bach, specifically his musical composition. This issue comes to the fore with his St John’s Passion, especially as presented by the Sydney Philharmonia Chamber Singers. The inclusion of new works, in homage to Bach and cut into the original text, as well as the faithful resonant rendition of Bach’s original composition, encourage interpretation that while Bach was a faithful believer in his Lutheran heritage, his creative works cannot be too readily circumscribed in form, ideas or motivation to this same heritage. Bach’s music supplements and indeed transforms traditions of liturgy and religious music, and invites close attention and wonder by audiences at the time of first performance at Leipzig in 1724, as much as Chatswood Sydney in 2021.

Different music types are used to embrace different modalities of faith. In recitation it faithfully reproduces the story of Christ’s conviction crucifixion and resurrection, in terms of the direct speech of participants of the event. The result is a characteristically Protestant manner to the main part of the work – the story is personalised and owned realistically by individual agents of the narratives, covered by accomplished voices of Richard Butler (Evangelist) and Andrew O’Connor (Christ).

The brazen visceral energy of Evangelist’s historical testimony of the natural apocalypse at the time of the crucifixion charges the Second Part (33). The work overall is full of contrasts, and never dull or repetitive. The realist mode is dramatised while remaining true to historical textual roots, through constant musical exegesis that follows verbal exchanges. Bach’s work fits in an operatic or musical theatre genre as much as any other. It is as close to an Opera or Jesus Christ Superstar as it is to the Latin Mass. The range of utterance and speech acts, from promise, lament, proclamation, pain, guttural shock, and hope, is rendered in a rich repertoire of emotion by the 37 voice choir, who commence ex cathedral arranged and spaced in rear high seating of the Concert Hall. The work is sung in German although one might assume the German is a common dialect. In any case it is beneficial for an Australian audience to follow the English translation; the relationship of written and musical forms is close, and the Philharmonia program is available in print and online, is well produced and proved to be a great help before, during and after the show.

Passion this might be, but it is unlike a Catholic mass and indeed unusual for a liturgy of any sort. Bach intended a sermon to be inserted between its parts. The Philharmonia has inserted commissioned works within each part. Twist’s title of Heaven’s Tear Apart evokes a surging apocalyptic energy at time of crucifixion. Twist’s own experience of the 2019-20 Australian bushfires was sublated into text deleted by Bach from the original. His contribution was welcomed, and helped remind us of dimensions and complexity of Bach’s own.

The Philharmonia Choirs can be congratulated for allowing collaboration Bach 307 years after the first composition, collaboration that not only “reimagines” the seminal work but reveals the ‘reimagining’ that work in itself made to its own traditions and context. Twist’s inclusion recognises a contemporaneity in Bach: rather than a liturgical reiteration of ecclesiastical materials, Bach layers, expands and finally transitions tradition into a modern progressive style and age, as part of a renaissance of the relationship of reformed religion and art.

The self conscious Protestant style is further demonstrated in the abundant non biblical writings. These are anonymous in sources, in part at least drawing from existing congregational hymns. They extend the focus of first person, direct address, and dialogic intimacy, into poetic arias of confessional expression supported by heightened and intense music, covered often by soloist Celeste Lazarenko, as well as Sian Sharp, Nicholas Jones and David Greco.

The beautiful Bass Aria with Chorale of the Second Part ( 32) is a lovely lament, expressing bold personalised candour right at the moment of crucifixion.

My dear Saviour, let me ask you,

now that you are nailed to the cross,

and have yourself said, ‘It is accomplished’”

am I set free from death?

The Soprano Aria (35) is a pure piece, combining singer (Celeste Lazarenko) with flute.

your Jesus is dead

This section demonstrates how Bach selects and highlights individual instruments at various places. The orchestral arrangement is continually changing and unexpected.

The thrust of arias is not toward sacral orthodoxy but a fresh personalised perfusion of faith and direct identification of individual everyman speaker with christ, in ways that in the words of a program note by Yvonne Frindle “transcend” any liturgical tradition. The resulting immediacy allows a sense of incompletion and responsiveness beyond biblical text: into that space the congregation, modern audience, and current commissions, are able to step and participate. The expressions of private individualised faith, expressed with almost transcendent immediacy, are fresh for their time, and are in line with the nineteenth century inquiry into radical experience of self, in authors such as Nietzsche and Keirkegaard. Bach did not assume his work conformed to an existing ecclesiastical mould: he identified new functions for its use, including use of choral and chorale pieces as congregational hymns.

The concluding chorale of the resurrection injects a welcome, and in christian terms necessary, redemption sequence into the overwhelming grief of earlier parts.

Carry my soul at the last

Into the lap of Abraham;

Let my body in its little bedchamber

Rest gently, free from any pain or suffering

Until the day of judgment.

What bold yet simple personal utterances to affirm life after death, lines raised in grand singing in bring fresh energy to end of the Passion. In the manner of John Donne, there is no barrier between the experience of the believer and the metaphysics of the heavens.

Shelley’s work (Ein Bächlein im Bac) is inserted into Part Two and continues a personalised style, with lovely cello accompaniment and lyrical singing commencing with text and music of 16th-century Slovenian composer Jacob Handl, which was originally included on the same program as Bach’s work. Shelley ‘treads so lightly’ in her delicate piece inspired by loss of friend’s son. Twist and Shelley together reveal the range of styles and meaning at play in Bach’s work.

The Philharmonia Baroque Orchestra  played with methodical dedication through a long complicated score, which would have demanded considerable rehearsals. The orchestra features specialised period instruments (Viola D’amore, Viola Da Gamba, Oboe Da Caccia and Oboe D’amore) which were a delight to hear. From the first section the orchestra was heard with great acoustic clarity – no doubt in part due to the acoustics of the concert hall. Its light wooden Scandinavian like interior was a lovely light setting for a performance that was overall crisp and clear in its approach to a complex breadth of compositions. The choir, soloists, orchestra and conductor, Elizabeth Scott, received sustained and deserved applause by the audience for a remarkable almost impeccable presentation of an important ingenious work from the vast Bachian oeuvre.

Hopefully this work, involving so much development, and skills and resources for delivery, can be repeated for a further wider audience. It provides a window between a tradition of faith and contemporary sensibility, and a possible window for reclamation of faith and tradition in a skeptical  age.

at The Concert Hall, The Concourse, Chatswood