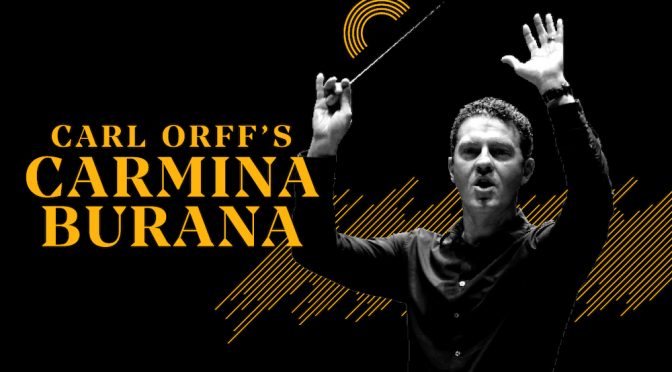 O Fortuna! With Covid restrictions ramping steadily down Sydney Philharmonia Choirs is once more able to deliver the signature mass choir performances, for which the organisation has earned its impeccable worldwide reputation. What better way to mark the Choirs’ return to full force, than with Carl Orff’s kaleidoscopic Carmina Burana, presented in the majestic surrounds of Sydney Town Hall, Saturday May 22. Don’t miss it!

One of the most popular concert experiences of the 20th and 21st Centuries, Carmina Burana is based on a collection of medieval poems and songs celebrating the fickleness of fate and fortune, the circle of life, the joys of wine, gambling, love, lust and passion. From the instantly recognisable opening roar of O Fortuna! – soundscape to numerous films, documentaries, television shows and commercials, including Carlton Draught’s multi-award-winning “Big Ad”; – to gentle lullabies and rousing drinking songs, it’s a wild musical ride for your senses.

Performed by Sydney Philharmonia’s acclaimed 120-voice Symphony Chorus in one of Sydney’s most loved concert venues – where incidentally, Carmina Burana had its Australian premiere in 1956, with Sydney Philharmonia Choirs providing an all-powerful chorus – this is sure to be one of the city’s most joyous concert events of the year, marking a turning point in the return to “normality”,  and (we believe) the largest choral performance in the world since the onset of the 2020 pandemic.

In addition to bringing the world’s greatest choral masterworks to the stage, Sydney Philharmonia Choirs also has a longstanding commitment to showcasing music by diverse Australian composers – from the most accomplished, to new and emerging voices.

Throughout 2021 each of their concerts will open with a live performance of Deborah Cheetham and Matthew Doyle’s Tarimi Nulay – Long time living here, a musical  acknowledgement of country commissioned by the Choirs as part of their 2020 centenary celebrations, sung in the local Gadigal language.

And for Carmina Burana, the Choirs will also perform two stunning contemporary choral works: Peter Sculthorpe’s Sun Music (version for voices and percussion), and John Peterson’s The earth that fire touches. Evocative soundscapes as diverse as the Australian experience and landscape that inspired them.

The  entire concert will be conducted by Brett Weymark, in his first Sydney appearance this year, following his triumphant seasons of Michael Tippett’s A Child of Our Time and A Midsummer’s Night Dream at Adelaide Festival; and Carousel for the State Opera of South Australia.

Book now for this celebration of song! Carmina Burana, Sydney Town Hall, one concert only, 3pm, Saturday May 22. Tickets from $49. Your NSW Dine & Discover Vouchers are valid for this concert. sydneyphilharmonia.com.au/concerts/2021-season/carmina-burana/

For all the latest news from Australia’s leading choral performing arts company, subscribe at sydneyphilharmonia.com.au/

Connect with Sydney Philharmonia Choirs at: