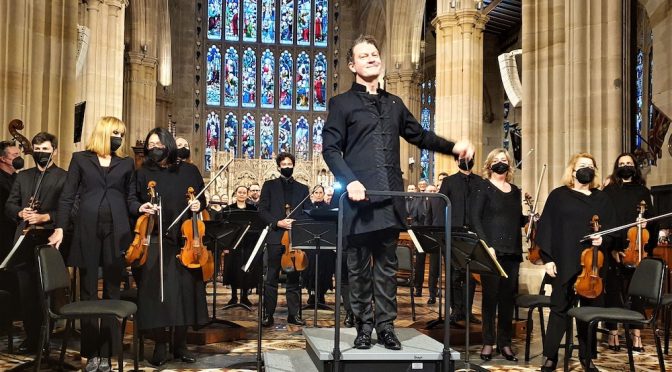 It was standing room only at the sizeable St Andrew’s Cathedral in central Sydney on Saturday afternoon. The gathering came to hear the Chamber singers, String Ensemble and members of VOX from the Sydney Philharmonia Choirs in a matinee of contemporary choral music.

The concert was dedicated mainly to the works of composer Peteris Vasks. Born in Latvia shortly after the close of World War II, Vasks would have been growing up in a country decimated by the warring parties. Although there was a non-aggression pact signed at the beginning of the war between the Soviets and the Nazis, it didn’t last long and both took turns at invading and overthrowing the Latvian government.

The country is small with a population maxing out at 2 million so, having thousands of locals “removed” first by the Soviets, then Nazis, then Soviets again, they would have been struggling to count their remaining neighbours.   As a child for Vasks, it would have been a harrowing time with plenty of opportunity to witness the worst of human traits. Yet, Vasks grew up in church family where his father was a Baptist pastor. Having faith appears to have added incredible strength and solidity to his countenance which is reflected in his compositions. He is considered one of Latvia’s best known composers to date.

The choir opened the concert with their new tradition of paying homage to country with “Tarimi Nulay – Long time living here” jointly composed by Deborah Cheetham and Matthew Doyle.

With barely a pause, they moved straight into the first Vasks work “Pater noster” or “Our Father”. This is a beautiful, simple work designed for a congregation to be able to master and sing in church. Thinking about the chaos that could be heard outside the building on George St, Sydney – a large walking protest with police cars, tram bells, traffic, someone on a loud speaker talking about a separate issue, even a grumpy seagull – Vasks prayer succeeded in shutting it all out. It was easy to close the eyes and become absorbed in the comforting chords of this little prayer.

Two premieres were also on the program, both by Australian composers. The first by a 10 year singing member of the Sydney Philharmonia Choirs, Maria Lopes, titled “My Life Flows On”. Three years in the making, Lopes carefully shaped the work around the voices with which she is already so familiar. The work drew together texts from 17th Century English poet John Dryden, 19th Century hymn writer Robert Lowry and reaching far back into ancient Greece to Heraclitus of Ephesus.

The common theme between their texts describes life as a flow. The opening felt like someone trying to sound optimistic during dark times. It was an apt representation of what we might be feeling in the world today. A double bass droned underneath a simple melody and harmony of violin and viola. The vibes markedly raised as the choir leapt into a repeat of “How can I keep from singing?” A stronger, more positive message with all parts of the choir joined in expressive and melodic assembly.

The second premiere was commissioned from Melbourne based composer Stuart Greenbaum, “The Night that the Museum burned” based on a poem also commissioned for the occasion from Ross Baglin. Greenbaum and Bagln have been collaborating for more than 30 years and it was easy to recognise a good working relationship. The poem describes two scenes, one above the other. The one on top is a swish apartment on the 40th floor of a high rise building. Impeccably dressed guests are celebrating a film release with champagne and canapés. Below them on the ground floor a molotov cocktail (a “bottled comet” with flaming tail) is thrown through the window of a museum, setting the building alight. It draws multiple fire engines and makes perfect instagram fodder.

It’s a fun, clever poem of two verses, which feels like a canapé itself whetting your appetite for more. The sophisticated text made it tricky to follow the story and would have been nice to hear more contrast in the music between the two scenes. The music epitomised Greenbaum’s love of diverse application. The sopranos and altos sometimes serious, then swooping down and dropping away, the tenors and basses in pizzicato. The work was frequently filled with tension moving from anxiety to high drama, then closing with an appropriately audible fade to black. The premieres were well received with both composers on hand to accept gratitude and generous applause.

Following was another work from Vasks “Dona nobis pacem” (Grant us peace). With the opening Vasks work being quite close to traditional sacred music, it was hard to imagine how we could move from the high drama of Greenbaum’s work back to Vasks but, in fact, they transitioned very smoothly.

The second half of the concert featured Vasks Missa or Mass. Very interesting to have a modern take on the old traditional Latin words. The various sections seamlessly moved between sombre, solid chords and unsettled dissonance through to elegant phrases, delightful fragments, rolling melodies and strong positive themes soaring up high into the arched roof of the church. The Missa concluded with simple strings to accompany a deep feeling of peace.

As the final notes faded away, the chaos of the Sydney street outside could once more be heard, bringing the audience back into reality. They were full of appreciation for the performers with much applause. Such a treat to hear great music in this stunning cathedral.

LOPES – My Life Flows On

GREENBAUM – The Night that the Museum Burned