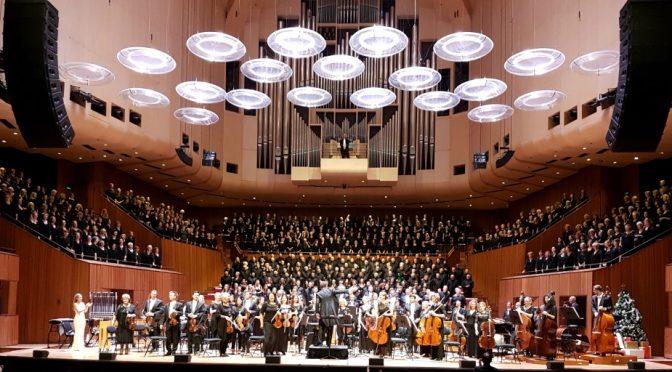 The joy of singing and the magic of Christmas was on full display on Friday 7th December at Sydney’s Opera House. The Sydney Philharmonia Choirs (SPC) performed a heady program of Christmas classics conducted by the Music Director, Brett Weymark. It was a magical evening of carols, music, readings and lots of wonderful entertainment ushering in the festive season.

In the very capable hands of long time Artistic and Music Director Brett Weymark the 500 strong choir consisted of the Sydney Philharmonia Chamber Singers, VOX, Symphony Choir and the Christmas Choir (apparently they had only 6 weeks to rehearse). Accompanied by the Sydney Philharmonia Orchestra and supported by two outstanding guest soloists Kerrie Anne Greenland and Teddy Tahu Rhodes presented a great collection of music spanning centuries including famous songs from stage and screen and so much more.

The evening opened with a tongue in cheek introduction by ‘Her Majesty- The Queen’ and the deep resonant sounds of the Concert hall organ and horns which heralded ‘The many moods of Christmas Suite 1’ sung beautifully by the choir singing ‘Christ is born today’.

There was a wonderful balance between Orchestra and Chorus throughout the concert.

Audience participation was strongly encouraged by Weymark commencing with ‘Silent Night’ which celebrated its 200th birthday year this year and continued with other carols. These included ‘O Come, All Ye Faithful’, ‘Good king Wenceslas’, ‘Hark! The Herald Angels Sing’, ‘Joy to the world’, ’The First Nowell’ ending with a very joyful and prestissimo ‘Deck the Halls’. Its increasing fast tempo ended nicely with a slower paced finale.

The brilliance of J.S Bach’s Christmas Oratorio Cantata BWV 248/1 was showcased and deeply sung by the Operatic Baritone Teddy Tahu Rhodes. Teddy also gave an expressive reading of a beautiful poem by Siegfried Sasson ‘Everyone Sang’ which focused on German/English soldiers laying down their arms one Christmas Eve during World War 1. A moment in time when the futility of war had been put aside as explained by the baritone.

Mid way the conductor dedicated the concert to the memory of the great Richard Gill who firmly believed that music had the power to change people’s lives and that it mattered. ‘Take care of this house’ a duet sung wonderfully by Kerrie Anne and Teddy Tahu Rhodes whose voices provided much contrast in both tone and range.

So many special musical moments throughout this concert.

A real highlight was the glorious and extremely moving rendition of Morten Lauridsen’s   ‘OMagnum Mysterium‘. The heavenly harmonies and the power of the voices alone transported the audience to a higher meditative plain. Truly the beauty of the harmonies and the control of SPC’s choir transcended all words.

The second half opened with “Amazing Grace” sung by SPC’s chamber choir standing in the aisles of both the Stalls and the Boxes above. Their voices soared across the auditorium and the lights flickered from their songbooks was utterly mesmerising.

In the second half we also saw a far more relaxed and entertaining Kerrie Anne Greenland singing with a broader vocal and musical theatre range supported by a number of lovely costume changes. Her rendition of Judith Viorst’s poem recited with a New York accent was rather convincing. Her transformation to the terribly British ‘Mary Poppins’ for ‘Supercalifragilisticexpialidocious’ was totally delicious. A particularly brilliant moment was when she sang/voiced ‘Supercalifragilisticexpialidocious’ backwards much to the audience’s amazement and sheer delight!

With great enthusiasm the conductor presented the world premiere of Luke Byrne’s Christmas song ‘Capricorn’. The lyrics were an adaption from Ruth Park’s novel ‘The harp in the South’ and Hans Christian Andersen’s ‘The Snowman’. It was beautifully melodic, extremely expressive with wonderful singing by the choir ably achieving the great musical contrasts and colour required by the conductor, varying between fortissimo’ and exquisite pianissimo in a seamless fashion. To hear so many voices on a symphonic scale was a unique experience.

Overall the entire concert was a pure Christmas extravaganza, an absolute delight and comes highly recommended.

Be sure to check out Sydney Philharmonia Choir’s upcoming program for 2019.