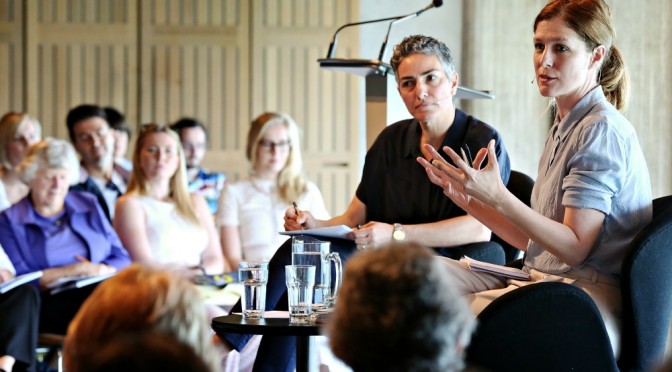 With a packed audience listening intently this talk, co-presented by Professor Annamarie Jagose and Sarah Goodes was all about Virginia Woolf and Orlando, the current magnificent Sydney Theatre Company production on at the moment in the Drama Theatre starring the brilliant Jacqueline McKenzie.

First, we were welcomed by Louise Herron, CEO of the House, and Ann Mossop, head of Talks and Ideas at the House.

When she publishedA Room of One’s Own in 1929, Virginia Woolf became a major symbol of artistic independence to generations of women writers and artists. Her ideas about gender and the relationships between men and women were an important part of her fiction, as Orlando (published the year before) and To The Lighthouse demonstrated.

Annamarie Jagose is a Professor at the University of Sydney and a scholar in feminist and queer studies. She is the author of four academic books, most recently Orgasmology. She is also an award-winning novelist and short story writer. Jagose spoke first about Woolf’s being ‘born Victorian’ and her ‘scandalous’ life living life as part of the Bloomsbury group. Woolf had a heightened sense of living through historical change and throwing off Victorian values and attitudes.

Woolf actively distanced herself from Victorian values. She wanted woman to ‘repossess the lives’ and fight for their freedom and equality. By the time Woolf had published Orlando in 1928 she was already the author of five other major books including The Voyage Out. Mention was also made of Woolf’s relationship with Vita Sackville West. Jagose described Orlando as smart, funny, sarcastic and full of in-jokes. When this Woolf work was published in 1928, sales took off like a rocket.

The focus of the evening/discussion then moved to the highly credentialled Sarah Goodes. Goodes is Resident Director at the Sydney Theatre Company and the director of the current production of Orlando. Starting off with a question from Jagose ‘’What do directors actually do?”, Goodes spoke about her process in bringing Orlando together.

The version she has used- adaptation by American playwright Sarah Ruhl– was first produced by an American company in 2010. Goodes described Orlando as being very tongue in cheek, warm and funny. She described how the production sought to translate the novel’s images and metaphors into a theatre form.

Goodes’ production made a lot of use of the Drama Theatre’s  double revolve and Renée Mulder‘s design of a split staircase with concealed doors, drawers and hidey –holes. There wasn’t much dialogue in Woolf’s book and in the stage adaptation various cast members acted as narrator. Interesting use was made of the male chorus and there was much cross-dressing.

Goodes stressed that the Company tried to capture the spirit of the play. She mentioned that it was a very long process getting this production ready…some 18 months in all…with numerous design meetings, castings, rehearsals. As well there were issues with getting the rights to some of the music used which was only sorted at the last minute.

Goodes spoke about how there was plenty of discussion in the rehearsal room about contemporary attitudes to gender.

There was a brief time allocated to a Q and A from the audience.

All in all, this first forum in the Culture Club series gave a wonderful insight into the world of Virginia Woolf, her creation of Orlando and the Sydney Theatre Company’s long process in bringing this controversial work to the main stage at the Sydney Opera House.

The Sydney Theatre Company’s current production of Orlando is playing the Drama Theatre at the Sydney Opera House until the 19th December.