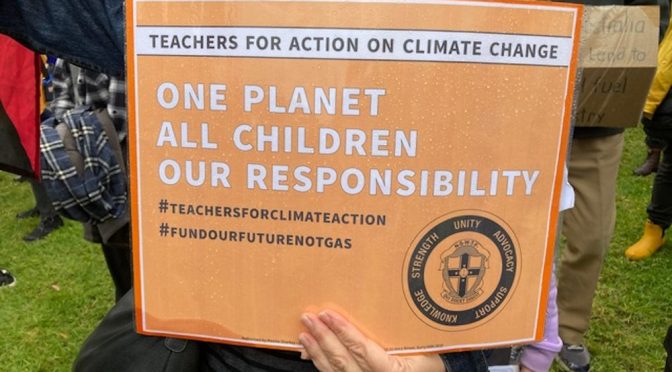 Congratulations to all the sign makers, T-Shirt printers and banner painters. Art is part of the School Strikers’ campaign. Climate activists’ art comes in many forms. The Facebook and Instagram posts announcing the strike were usually professional quality graphics. They gave the needed information and the encouragement to be part of the action through the bright colours and  clever designs.

On the day, May 21, there were a huge variety of artworks, everything from a child’s painted cardboard  sign to expertly crafted two metre banners.  People were inspired to get their message across through words, colour and even objects. One woman’s poster read ‘Fill our climate leadership vacuum’. She carried a vacuum cleaner all the way from Town Hall to Central Station to make her point. That’s how determined people were.

Some posters promoted the general concept of abandoning fossil fuels. Others represented an organisation to show that the organisation supported the protests and climate action. I saw the Socialists, Green Left, Teachers for Action on Climate Change, 350.org, a couple of Unions, Christian Students Uniting Church, Australian Parents for Climate Action and many other artworks representing an  activist group.

The cleverest were the ones that told a story. A handmade sign read “STRANDED ASSET” with Australia alone at the bottom of the globe and no other landmass at all. This sign has a double meaning.  The subsidised-gas-led recovery and the new coal mines planned are almost all going to end up as stranded assets, having no value whatsoever to their investors or to the country. What fool would invest in them? Apparently only the government.  The second meaning is that Australia is stranded while the rest of the world is busy tackling climate change. We are alone, ostracised and ridiculed for our lack of foresight. Once the tariffs on our ‘export of pollution’ are in place, we’ll be even more isolated and stranded.

Another handmade sign with a double meaning was “Who Gives a Crap”. This was simply the cut out of the ad for bio toilet paper with the addition of the words “We do”. The girl’s effort encouraged people to use the better paper and to care about the environment.

This time around, there were far fewer signs that muddied the waters. A decade ago rallies had signs from Free Tibet, Gay and Lesbians Rights,  Agent Orange and other groups. This time the message was more focused. One child’s poster read “YES TO 100% PUBLIC RENEWABLES”.  I didn’t tell her that the planet is not going to be saved by governments. It is the smart investors and the bright entrepreneurs who will make it happen once governments set policy that provides certainty.

There has always been some confusion around the 350.org’s messaging. I asked a man standing in front of the climate organisation’s banner if he knew what 350 meant. He said it was the need for a circular economy, that 350 were the degrees of the circle. I didn’t ask what happened to the other 10 degrees.  The 350 stands for 350 ppm (parts per million) of carbon dioxide, which has been identified as the safe upper limit to avoid a climate tipping point. On the day of the School Strike, May 21, 2021, the concentration was 418.8 ppm. No wonder the kids are marching.

One of my favourites was What happened this week in FOSSIL FOOLS’ with the heads of the PM and  Treasurer in the ‘O’s of ‘fools’.  Another good one was ‘anyhow* Have a Gasfield’ with the PM giving the thumbs up to a cigarette packet branded Gasfield. There were plenty of ‘Scomo” posters, some were clever, some were crude. All were heartfelt.

Another favourite was ‘Come on, Australia!!!  We should be an example to the world’ in bright red letters. It would be possible to transition and be a world leader in renewables, if only we had a leader! 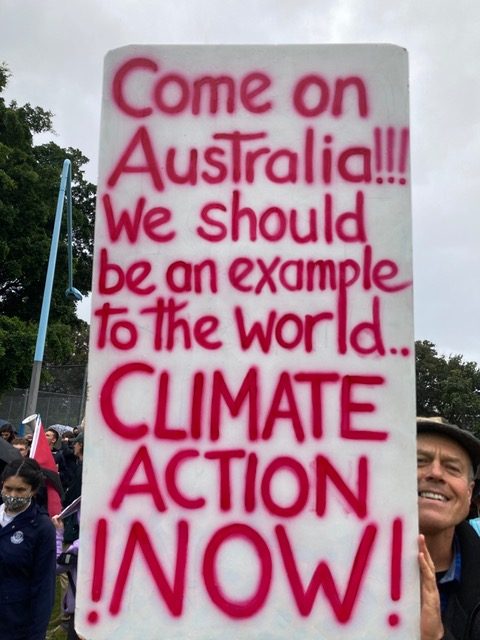 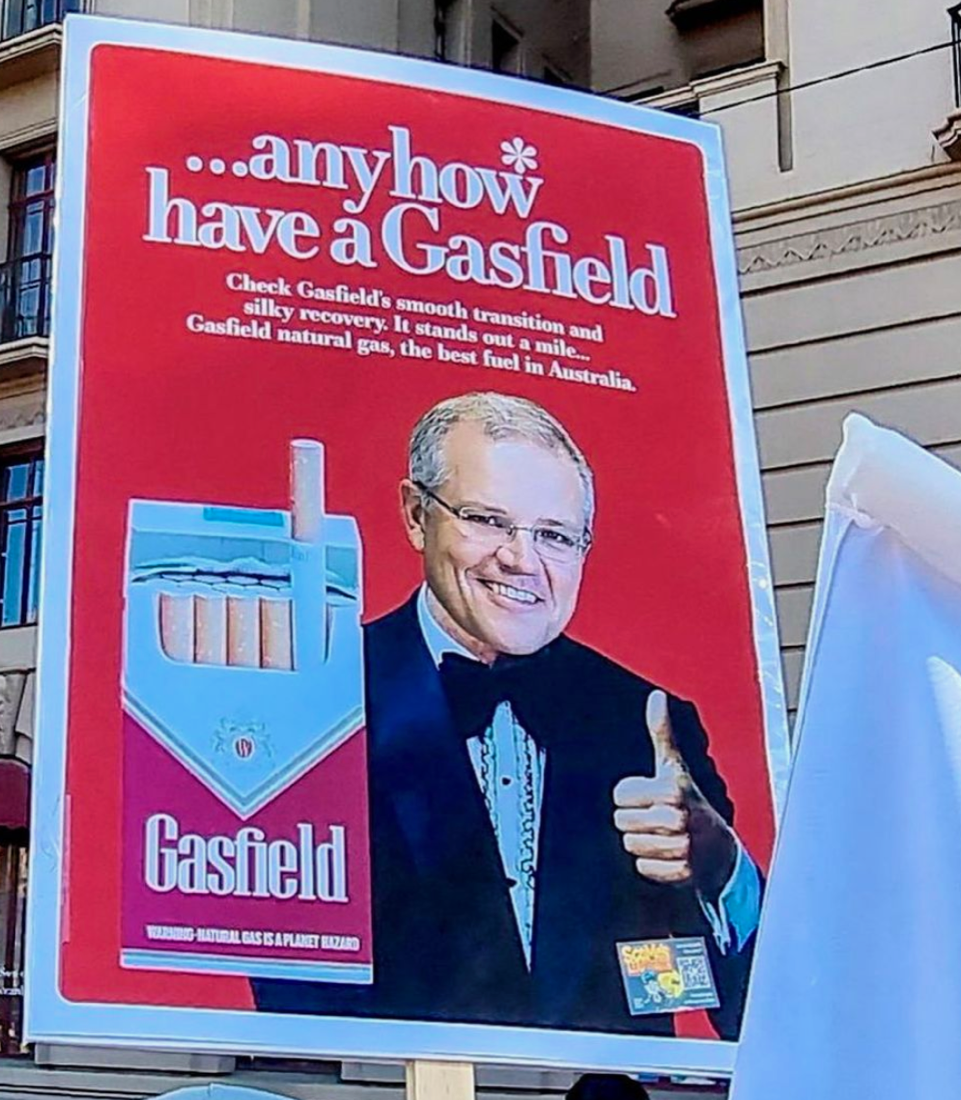 All photographs by Carol Dance.