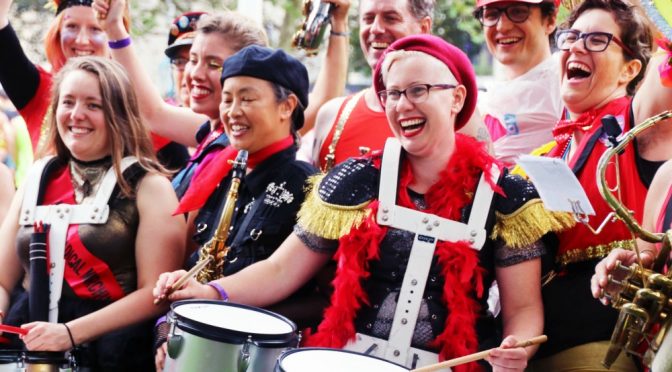 Being in the Mardi Gras Parade?  One word … chafing.  Maybe too words … sore feet.  Possibly three words… rain and drizzle.

This is what my photographer friend and I set out to explore in the 3 hours we were wandering in the float assembly area before the off.  I know why I do it.  Despite the weather, forgetting the very tender balls of my feet this morning and in spite of a wet weather plastic uniform which would simply not behave and stay away from exposed skin!  I march with the SES because it is an inclusive organisation that welcomes all people and who helps anyone in the community who needs us.

Over 300 hundred photos and a raspy voice from shouting questions over blasting music later it seems I am not alone.  Me being of a service bent, we hit those participants in uniforms first then moved into the wash of colour and excitement.  But we also took time to speak to the audience, the bystanders, the crowd, the viewers whatever you call them.  We went back several times but they are a surprisingly shy lot.

As soon as we approached with camera and notebook, many of the crowd just looked dumbstruck and cowered away but with a bit of empathy, we were all being drizzled on, a few commonalities distilled.  Yes it’s about the spectacle and the sequins and the razzle dazzle but it’s also a political choice to watch a parade which screams love and equality above the blare.  It’s the joy of watching a community celebrate.  One elder lady in a wheelchair with a great viewing spot just behind the barrier summed it up.  “It’s the most exciting event of the year and I don’t care if we get rained on!”

But it wasn’t too wet really!  In their own words this is why some people march in the Mardi Gras.

NSW FIRE BRIGADE participant.  “We promote a diverse workplace and my wife and I have been coming for 6 year to support equality for our gay friends.”

WEST CONNECT DOMESTIC VIOLENCE SERVICES with their vibrant rainbow umbrellas are all about “shelter for anyone who needs us”.

GLADIATORS FOR YOUR HEALTH.  Doctors and dentists caring 24/7.  “We are fighting for your health; you should be fighting for our rights.”

NORTHCOTT DISABILITY SERVICES with their brightly decorated wheelchairs proudly supporting difference in their clients, carers and community.  “We are all different and that needs celebrating.”

AUSLAN group.  “English is not my first language and we are incredibly proud of our natural language.  We want to get everyone involved.”

GILMORE GROUP.  “Anyplace is a good place for equality but Mardi Gras shines.”

CORRECTIVE SERVICES MARCHING BAND participant.  “I think providing music to march to supports everyone near us at such an important coming together.”

REACH OUT.  “Too much suicide, too many LGBTQI people needing support, too much inequality equals poor mental health.”

Joy of the moment:

BALLOON SALON:  wearing huge red hearts made of dozens of small balloons and waving black and white balloon brides and brides and grooms and grooms.  “We are celebrating for when Marriage Equality happens.”

FREE GAY AND HAPPY says it all.

50 odd BRISBANE WATER POLO players down to party with their counterparts, the SYDNEY STINGERS.  “It’s our first Mardi Gras because we are a new club… there’s really no other option we have to be here.”

LEATHER GROUP:  “How can we ask for acceptance when we don’t accept the subdivisions within our own community?  Everyone is welcome at the table.”

230 ANZ staff from Sydney and Melbourne in glorious blue costumes and feathered headpieces and choreography no less.  “We are major sponsors, darling.  We are holding tight for equality.”

FORCE OF NATURE down to underwear to change into brilliant rainbow coloured tailored uniforms mocking Bill Leak’s odious Nazi comparisons.  “Maybe it will rain and those white boxers will get see through.” As good a reason as any for a parade celebrating pride in sexuality!

SAMBA BAND:  Brazilian music and feathers galore.  “Gathering.  We join together with other groups all the time to play music.”

A volunteer with a gold beard and face.  “It’s the only cultural ceremony I feel part of, living in my city.”

INDONESIAN Community:  Not much English in this group but “Happy, Happy, Happy” is universal.  I get it.

SOCIALIST ALLIANCE:  “Queer rights in a party venue … lovin it!”

RAINBOW LABOR.  “Pushing public policy in solidarity with the community in our fight for equality.”

NSW LIBERALS: “There are gay liberals and we support our community with love amongst everybody.”

Amnesty International NSW LGBTQI NETWORK .  “Our focus is Safe schools and Article 26 of The Universal Declaration of Human Rights means everyone has the right to education.  Can’t get an education if you are being bullied!”

RAINBOW FAMILIES:  with red hearts and kids on scooters.  “It’s about visibility because love makes a family.”

RIFF RAFF MARCHING BAND.  “We are an activist band and we have joined with No Pride in Detention to get our point across.”

And lots over overseas visitors (“We don’t have anything like this in Scotland!”) including QUEER IRISH, “Celebrating the relationship between brothers and sisters in Ireland and Australia”.  Astonishing how many English and Irish I spoke to actually … all with the same idea.  Ireland has same sex marriage but not Australia.

Plus I got a little inebriated with a lovely straight Irish man after the parade and he was raging on the subject of how many wonderful strong female political leaders have led to social change.  As he swept me off my feet in a huge hug and kiss explaining “You would love Mary McAleese!” it was hard to disagree.  And my feet were sore so I didn’t mind being carried along with the joy of it. All photographs by Rebecca Lawrence.