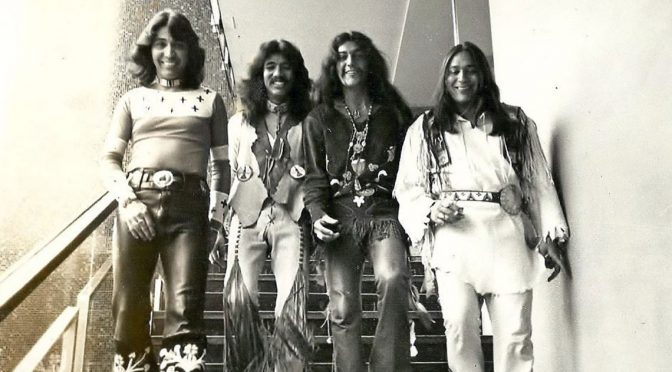 Invariably, the great surprises and sincere sensations of the Sydney Film Festival come from documentary film makers shining cinematic spotlights on our past, present and futures, rectifying the forgotten by elevating remembrance, examining the individual and celebrating the universal.

Two such gems are part of this year’s Festival line up. For some it will be an education. For aficionados it will be an edification. Link Wray, Mildred Bailey, Charley Patton, Jimi Hendrix, and more make up this stomping tribute to Native American musicians who have heretofore gone unheralded in their cultural contribution to world music.

This Sundance winner kicks off with the thumping riffs of Shawnee guitarist Link Wray’s 1950s classic Rumble; the tune that gives the film it’s irrepressible name and sets its fascinating rhythm.

In RUMBLE : THE INDIANS WHO ROCKED THE WORLD  we hear how Native American musicians and rhythms influenced the South from North Carolina to the streets of New Orleans, integrating and informing jazz and blues music.

It opens our ears to the anthropological quotient in contemporary music, the beats, the harmonies, the aesthetics, the very things the white settlers of America wanted drummed out have prevailed and enriched our musical heritage.

Executive produced by Apache guitarist Stevie Salas, this engaging documentary expertly reveals how Native American musicians were consistently left out of the story.

DATES FOR THE DIARY : Mama Mia! The mother of all maternity hospitals is in Manila, capital of the Philippines. Manila’s Dr. Jose Fabella Hospital is the setting for Ramona S. Diaz’s enormously engaging documentary film, MOTHERLAND, a frenetic facility for fecund Filipinas where hundreds of beds are strewn with mums and their carefully labelled new-borns.

Birth control is frowned upon in this underprivileged, predominantly Catholic community; even unmarried teens and 20-somethings with six kids are reluctant to use it. Resources are limited so, in lieu of incubators, the hospital has adopted Kangaroo Mother Care, whereby parents are obliged to snuggle their premature babies to their chest, 24 hours a day, until they reach an optimum weight.

Apart from the frustration of the foolish fear of fallopian tube ligation, MOTHERLAND brims with optimism, hope and resilience. The camaraderie and openness, some of it boisterously bawdy of these resilient mothers makes this film gratifyingly uplifting.

DATES FOR THE DIARY :