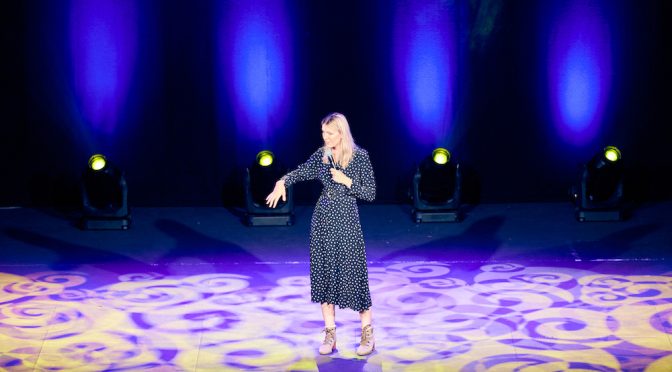 The Sydney Festival of Comedy Gala night offers a sampling smorgasbord of acts from its substantial spectrum of standalone standup comedy acts running until May 16 in locations across Sydney, Newcastle and Canberra. If the aim is to entice audience members to see the full version of the 5 minute window seen at the Gala, then the event fulfilled its aims admirably. One cannot complain when such diversity is on display, all curated to offer a high standard and mix of well timed, polished comic vignettes.

My personal preference was for deceptively low approaches of Bonnie Tangey, Chris Ryan, and the defiant ocka irony of John Cruckshank made one ask: what has changed since Paul Hogan stood up on national TV? Luke Heggie was merciless in his surprisingly tough pungent satire of the police force. Another act had a way with family reflections. This is rich territory if you can do it well. Cassie Wakeman delivered a refined narrative on ants. Geraldine Hickey was well timed in a flat nonchalance as she described a huntsman spider dropping on her lower parts during a naked limbo dance, and sticking there “like velcro.” These comic evenings do not exactly focus on the meaning of life. Final act on the program was Jimeoin, singing with a guitar, who was, well Jimeoin, singing or sort of, with a guitar.

Not everything clicked. I am unsure about the spooning 4 year grandson story. It’s such a fine balance – we want irreverence in comedy, we want  taboos to be broken, but some topics remain so difficult in the real world. What next? Bestiality ha ha?

I still don’t understand the standup uncontrolled fetish for body part jokes – these references were generally under control and funny at the Gala, with the exception of the MC puppet who was as brash as he was loud. A funny joke in itself, indeed a funny act in its own right, but on the night less would have been more. A ventriloquist would have helped although I appreciate that is a tough skill. And Randy never (not once) pronounced a performer’s name clearly.

There was an excerpt from ‘Schapelle Schapelle–The Musical’ presented after interval, complete with Australian flags from the ceiling and on costumes. This was a high production number, with sharp composition and singing, although questions remain about the lyrics and remainder of the musical, which must await viewing of the full show. This promotional snippet with music and choreography as part of its humour made one ask why is the short form genre of comedy offered in the Festival so apparently narrow.

One can wonder if long form comedy plays (of which there are many) could be included in the Comedy festival, along with cabaret and other acts. Gala night would become truly vaudevillian for one thing. One understands that stand up comedy has grown from informal grass roots and that is its charm and strength but the scale of this festival suggests a level of organisation that could support a variety of comic formats.

Finally there needs to be a program for such a Gala night – especially if the MC cannot pronounce the performers’ names. One page would do. Are all performers on the night included in the Festival? Are they all on Ticketek?

You’d be a sourpuss to complain too much or at all about Monday night. The show was a bundle of fun and merriment to be had by all.