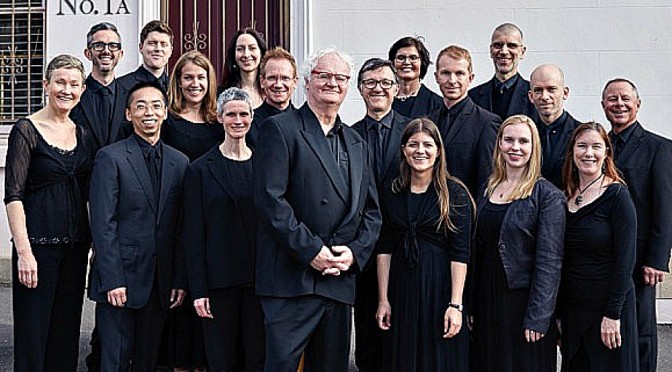 The title of this concert suggests we are to be entertained by the talents of the Sydney Chamber Choir with historical works based on religious texts from the Christian tradition.

That was very much the case as guest conductor Jonathan Grieves-Smith guided the choir and string players from the Orchestra of the Antipodes through interpretations of Handel and Bach. These performances were both sensitive and strong.

In an impressive juxtaposition however, the choir’s reputation for versatility continued to be demonstrated with the presentation at the programme’s centre of stunning and innovative contemporary works receiving Australian or world premiere performances.

The first of these modern works was  Prayer (2011) by Latvian composer Peteris Vasks. Using the prayers of Mother Teresa for us to see, hear and love humans as God wishes, Vask’s creation is a single movement work  at times quite hushed but with substantial  impact.

Grieves-Smith succeeded in preserving the composer’s unique and subtle complexities. The Sydney Chamber Choir worked well with the Orchestra of the Antipodes strings to deliver seamless and unified arcs of sound along with the thought-provoking English text.

This work was suitably prefaced by J.S Bach’s cantata Christ Lag in Todes Banden (1707). Its verses set a text by Martin Luther celebrating the life and sacrifice of Christ conquering sin and spiritual death in our world.

The realisation of this early sacred cantata was crisp and fluid in its narrative and  elaboration. The interpretation enabled a gentle simplicity, clarity and warmth of expression.

Supported well by the Orchestra of the Antipodes’ strings and organ without the brass of Bach’s  original score, the work’s verses for a single voice part were sung by all members of that part of the choir rather than a soloist. This both introduced us to the fine sections of the choir and emphasised congregational or community concerns.

Handel’s challenging choral setting of the Dixit Dominus text brought this concert of the same name to a spirited, well-articulated and energetic close. There was excellent diction from the choir in spite of the hectic nature of much of Handel’s score.

In terms of music history this programming returned us to 1707 to complete the concert, but now to Rome and the compositional ambitions of Handel rather than Bach as the concept of the Resurrection conquering death was reiterated.

The Orchestra of the Antipodes contributed to this work’s spectacular filigree via sparkling doubling of vocal parts. The continuo organ and cello supplied a rich tapestry upon which choir members were showcased as they sang arias and duets.

Choral entries during the soprano duet De torrente in via bibet were well balanced, evocative and sympathetic behind the single voices. Moments for soloists from the choir’s ranks during choruses were smoothly and successfully managed.

In the current funding climate for the arts, the inclusion of a work commissioned by the public in any concert is a particular thrill. This event was made even more special by the inclusion of a commission work in world premiere. Australian composer Ian Grandage’s work Why Do We Exist (2016) preceded the Dixit Dominus with another spiritual musing, this time on our place in nature.

The assembled musicians brought the beautiful and effective soundscape to life. The choir embraced the chance to imitate birds and create the sounds of nature. Once again, Jonathan Grieve’s Smith’s attention to detail and harnessing of  voices and instruments to present measured sections of quiet utterance was a masterful and mindful use of resources.

The Sydney Chamber Choir is next conducted by Richard Gill in a presentation of Haydn’s Nelson Mass at the City Recital Hall on October 1.