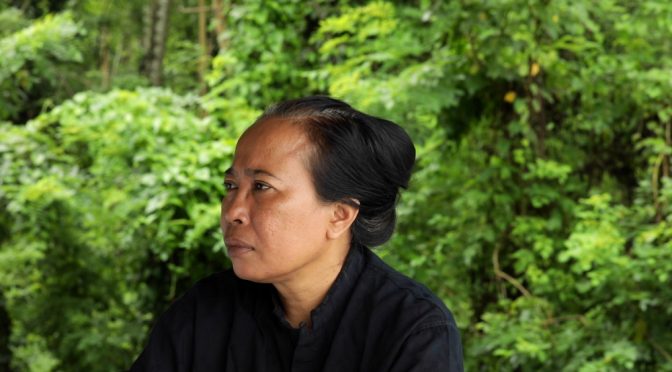 Casula Powerhouse Arts Centre (CPAC) has announced that Sydney artist Leyla Stevens is the winner of the 66th Blake Prize, one of Australia’s longest running and most prestigious art prizes.

The Blake Prize is awarded for religious art and has been in existence since 1951. The Prize was initially awarded annually from 1951 to 2015. From 2016 has been awarded biennially.

Stevens, from Petersham NSW, was selected as the winner from amongst 86 finalists. A three-person judging panel of Ramesh Mario Nithiyendran, Maud Page and Kumi Taguchi, had the difficult task of selecting the category winners from the exhibited finalists.

The 66th Blake Prize received a record-breaking 1,200 entries from across Australia and the world, a massive 56% increase on the 2018 submissions.

Stevens’ work, Kidung/Lament, is a three-channel video work by the Balinese Australian artist. The video focuses on traces of Bali’s histories of political violence and the complex manifestations of these concealed pasts amongst human, physical and metaphysical environments.

Two other NSW artists were awarded prizes on the day. Hazelbrook resident Eddie Abd was the winner of the $6,000 acquisitive Blake Emerging Artist Prize for her work In Their Finest, a video piece that combines long exposure Victorian death portraits with the traditional textiles of Greater Syria to explore the conservation of tradition by families uprooted from ancestral lands.

CPAC Director Craig Donarski said “Not only do these winning works speak to the incredible talent we have in Australia, they are also a shining example of how the rich diversity of cultures that make up our society can provide us with unique perspectives and powerfully moving artworks. The whole exhibition is a fascinating snapshot of the state of belief now: passion, anger, ecstasy, reflection, trauma and doubt, leavened by moments of wit, humour, beauty and playfulness”

The 66th Blake Prize Exhibition is currently open for viewing at CPAC until Sunday 11 April 2021. Hailing from every Australian state and territory, the finalist exhibition features work across a range of artistic disciplines, and reflects on a diversity of spirituality, religion, and beliefs.

Artists featured in the exhibition include: Antoine Veling (North Rocks, NSW), who captured a moment of ecstasy resembling religious iconography in Mark 5:28, when Iggy Pop invited the audience on stage during a show at the Sydney Opera House, Blak Douglas (Redfern, NSW) who explores their frustration with embracing the religion of colonialism in Three Strikes and You’re Out, Liam Benson (Baulkham Hills, NSW), whose large embroidery, Community Participation Embroidery, Thoughts and Prayers, was created through artist-led workshops in which participants made tributes to loved ones;  and Claire Healy and Sean Cordeiro (Blackheath, NSW), whose video work The Pilgrims focuses on Insta-tourists and our decade of self-worship.