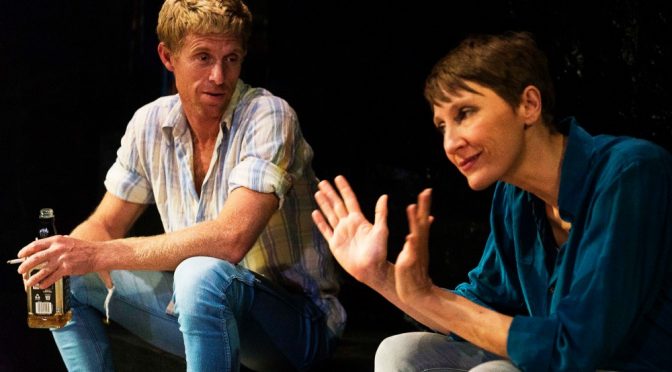 From time to time, a play comes along that fits perfectly well in the psyche – enabling us to relax, enjoy, compare, empathise, sympathise, laugh and brood.

SUNSET STRIP, Suzie Miller’s latest play, empowers its audience. We know that we are not alone and mutual hope is the elixir of well-being.

It is a play about challenge, hope and families struggling with their imperfections whilst maintaining a deep sense of belonging and an unbreakable bond

Miller says of her play, “I wanted it to reflect how we bumble through life with all sorts of challenges, some of which will never be fixed or cured, but which we take on board and battle along with. There are also many funny and darkly ironic moments that come about even when we live with ‘everything going wrong’. I wanted to celebrate this because it is something we have all known and have experienced.”

SUNSET STRIP is a holiday area of shacks built around a once thriving, but now dried up lake outside of mining town Broken Hill in outback NSW. The simple but emotive set design by Emma Vine fits the small stage of the Stables Theatre beautifully. Just sand and an old rowing boat.

Beautiful, charismatic and impulsive Phoebe (Emma Jackson), lives here with her father Ray (Lex Marinos). Ray once had success as a local miner and avid fisherman, but is now living with debilitating dementia. Sometimes he is lucid, but more often troubled and erratic.

Phoebe is about to marry her local boyfriend, Teddy (Simon Lyndon), on the same day as her two children are being returned to her after a troublesome battle with DOCS.

Phoebe’s older sister, Caroline (Georgina Symes), arrives home after many years in Sydney practising law, her career cut short from a challenging encounter with breast cancer: a mastectomy and resulting treatments : radiotherapy and chemotherapy. The sisters are essentially happy to see each other.

Caroline seems to be in control of the changes that surround her: the dried up lake, Ray’s dementia and the upcoming marriage of her sister to their old school friend, Teddy. She insists that Phoebe is making a mistake but Phoebe is not likely to budge.

The interaction that follows between these four dynamically different characters is beautifully written and the actors are so comfortable in their roles, thanks also to the clever, concise and sensitive direction from the talented Anthony Skuse.

The scenes are full of charm and humour, pathos and sadness, but overall, brimming with energy and life.

Award-winning playwright Suzie Miller has had over 35 productions of her works staged in theatres and festivals in Australia, the UK, Ireland, Canada, London and New York.

SUNSET STRIP has given her the opportunity to write a play that has two strong women characters at front and centre.

The cast are talented and extremely well cast.

Emma Jackson is magnetic and contagious as Phoebe. She owns the stage and has wonderful energy.

Georgina Symes creates a fascinating character in Caroline. She is composed, strong, yet incredibly vulnerable.

Simon Lyndon is at home on stage as Teddy. His character has sex appeal but is essentially unsophisticated and simple.

SUNSET STRIP is playing at the Stables Theatre in Kings Cross until the 1st of July. I strongly recommend that you see this inspiring piece of theatre before it finishes. It is thoroughly satisfying and enjoyable.

One thought on “SUZIE MILLER’S ‘SUNSET STRIP’ @ THE STABLES”