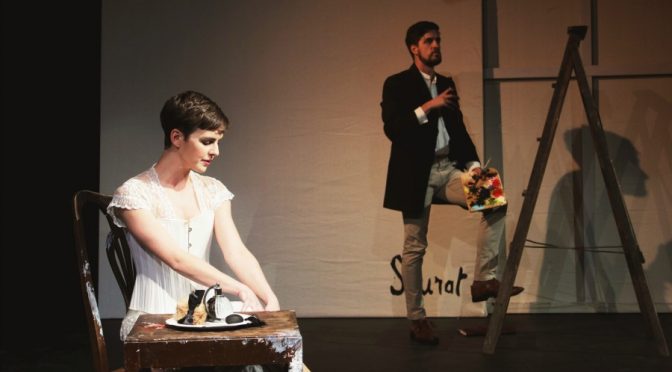 The two year process has not been easy. Relationships are strained and the pinpoint vision of the eponymous artist has blurred. Yet he creates, before our eyes, his masterpiece. A Sunday Afternoon on the Island of La Grande Jatte arrives fully realised as the first act finale of Stephen Sondheim and James Lapine’s SUNDAY IN THE PARK WITH GEORGE.

When I saw the original version on Broadway in 1984 my heart stopped at this sequence. Georges Seurat’s painting flew in as a scrim to be magically framed by staging. It was breathtaking and transformative. I’m not the only one who reveres the show either. A quick search on YouTube shows how many people still engage with and comment on those grainy videos of the original.

So, how do you reinvent a legend? If Sondheim can seamlessly transport one art form to another then surely an up-and-coming Theatre Company like Little Triangle can mount a fully realised reimagining even on an odd shaped stage in a revamped military shed on reclaimed swampland with a rich indigenous and community heritage as part of the Sydney Fringe. They sure can! And the painting is created with as much power and integrity as that seminal production.

Director, Alexander Andrews and Musical Director Conrad Hamill have made new art from old. They have a cohesive vision which is evident in every moment of this fine production. This is an unpretentious, unfussy, accessible, skilled and joyful rendering of a revered work. With love at its heart.

Beginning with George. Owen Elsley does such a terrific job here. Though vocally well up to the challenge, it is his acting which allows an audience to enter his world and stay with him for two and a half hours. Elsley’s George gives an audience all the complexity and artistic drive that the role requires but there is something else! The harnessing of creative spirit is what drives this George. You can see it in every line, sung or spoken. When he treats his lover, Dot, with dismissive, manipulative disdain as she poses or when he limits his interactions with other characters, including his mother, to observer and recorder. There is no coldness in this George, just a man driven to create a new way of bringing light to the viewer.

Pointillism was a way of using small brush strokes of various colours, allowing the eye to do the colour mixing. Use dots of red lake and ultramarine blue to make a violet hat. ‘Finishing the Hat’ is one of the more difficult emotional songs in the show. George’s distance and focus can be cold and unpleasant but Elsley interprets him with compassion, he is distracted but there is warmth.

The hat in question belongs to Dot, who is played beautifully by Georgina Walker. Dot’s drive matches George’s. Walker brings us a Dot who yearns to be better that she is. Walker’s intelligent character choices and strong physicality including a cute shoulder wiggle give depth and truth to Dot. She is funny and heartbreaking in places with a light voice that she makes the most of. Her Sprechgesang and control of the long phrases in the first and title song are really enjoyable.

There are so many really entertaining performances in this production. Sixteen detailed and nuanced creations and some really wonderful voices. To mention a few … Celeste I (Victoria Luxton) and Celeste II (Caitlin Rose Harris) are obviously having a great time and their infectious enjoyment is a highlight. Along with their lovely soprano blend, ‘The One on the Left’ is such fun and Jack Dawson as the soldier is great too. His turn as the wayward pooch is hilarious. As George’s mother, Tisha Kelemen is an arresting presence and her non speaking work is as good as her singing. I also really enjoyed Harry Flintcroft as Louis, his silent charm is a sweet adjunct to the inner turmoil of Dot’s decision making. And a shout out to Sophia Barnard as the little girl… great job Sophia! Great job by everyone in this cast, actually.

But it is in the Act 1 finale and its reprise as the Act 2 finale that true ensemble work needs shine. ‘Sunday’ is the best and most famous stand-alone song of SUNDAY IN THE PARK WITH GEORGE and this cast gave such a wonderful interpretation. The voice work alone was soaring. Director and Musical Director in harmony to create truly emotive images to elevate the emotional content. I cried. There were sniffles all around in fact. My normally hyper-critical companion had to ask me for a tissue!

Little Triangle’s production relies on such pure performance because there’s no tech to speak of. No audio production tweaking here, there are no mics. Great music in the cello and piano just under the voices, but no huge score to raise the rafters. No emotional guidance in the lighting either. It’s not needed and would get in the way. It’s “flecks of light and dark”, it’s “sitting in the shade” and it’s a cast who knows how to find a hot spot.

Neither any frippery in props or set. Utilitarian bare boards and blank canvas with a nod to period in a demitasse cup or a stick of a fishing pole. Costumes that create an ambiance and seem easy to move in with elegant detail in a cameo, a wrap, a lacy front panel. An out-of-proportion coat and the Celestes’ mix and match dresses and sashes in the brown and white palette contrasted with the vibrancy and colour of the modern dress in Act II. “And parasols”, beautiful detailed parasols raised to effect.

And really terrific movement. There is no choreographer credited but there is a very professional hand in there somewhere. Getting sixteen people around that stage with intent and beauty is no mean feat and some of the visual images are just lovely. As is the flow of the work. Moments of rushing and an exciting lack of “order” contrasted with solos simply seated, holding an audience spellbound.

There is such a strong vision to this production. Not drawn from the impossible template of the 1984 production, it is stand-alone and realistic. It’s a Sydney Fringe show after all. Limited budget, cast members who have other jobs and artistic obstacles that must seem insurmountable on bad days. Little Triangle have made a new thing, they have approached the work with a realistic attitude. It is a production to be enjoyed on its merits which well outweigh the occasional deficit.

Where that no-nonsense attitude really pays off is in Act II. I don’t like Act II, never have. I don’t like many Sondheim second acts … I actively despise INTO THE WOODS after interval. But Director Alexander Andrews has made it better, more balanced. Less angsty, more propelled than wallowing, there is a dynamism in Act II which took me by surprise.

SUNDAY IN THE PARK WITH GEORGE continues at the Depot Theatre until 16th September.