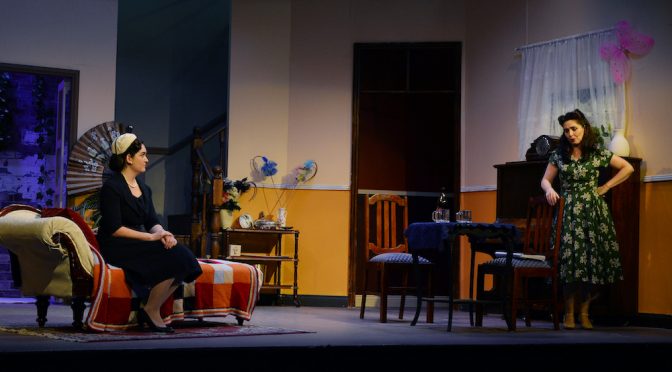 Ray Lawler’s classic play was first performed at the Union Theatre in Melbourne in November 1955. The play is considered to be the most significant play in Australian theatrical history. For the first time distinctly Australian life and characters were portrayed on stage.

The Doll, as it is best known, is set in the Melbourne town of Carlton and details the events of the summer of 1953 in the lives of its six characters.

The summer marks the 17th year of an annual tradition where two very hulky, virile sugarcane cutters, Barney and Roo, travel south to Melbourne for five months of partying with two city women,   Olive and Nancy. Every year Roo brings a kewpie doll with him, a gift for Olive, hence the title of the play.

The play starts with Olive waiting for Barney and Roo to come through the door. This summer lay-over, however, is going to be different. Nancy is not there, she has gone and got married. Olive has replaced Nancy with Pearl in the hope that the good times can still roll. But Pearl is no Nancy.

Shortly after Barney and Roo arrive we learn  of another blow to their much loved  annual vacation. Roo has left his job as a sugarcane cutter in anger that a young upstart cane cutter Johnnie works faster than him. Roo has come down with his mate but he is broke and will have to find  work.

There were technical difficulties at the start of this latest Genesian Theatre Company (GTC) production. It got to the point where Director John Grinston stopped the show for a brief time to get things sorted. The actors did very well to maintain their focus through what was a difficult performance.

Jodine Muir has had a number of credits in stage and screen over an acting career that has spanned over twenty years. She has played in productions such as ‘Our Town’ and ’84 Charing Cross Road’ and has performed in a number of New Theatre productions. Her debut GTC performance in the leading role of Olive was impressive, convincingly playing a high spirited, strong willed, independent woman.

Actors Centre Australia graduate Grace Swadling impressed in the role of Olive’s new offsider Pearl. This was her second production with the Genesian Theatre Company after having played Mrs Elton in Barry Nielson’s 2017 production of ‘Emma’. Swadling’s Pearl is not a party girl, and feels uncomfortable in the whole scene. One minute she’s in, the next minute she is out.  Swadling conveys her unease, even contempt.

Liz Grindley is an experienced actress having performed for a number of community theatre groups over the years.  In ‘The Doll’ she plays Olive’s mum, Emma. Emma is a tough woman, embittered by life  experience, but she is a bit of a softie around the boys. Grindley gave a good performance though I found her look, with the wig or hair net that she wore, was off-putting.

Heather Tleige has completed acting classes with the Australian Theatre For Young People and NIDA, performed  in a number of community theatre productions, and has acted and even been an assistant director for the screen.  She plays the little  girl next door with the nickname Bubba who enjoyed the party atmosphere and is now a young woman. Tleige conveys her characters’ wish to be part of the grown ups now.

Harley Connor has acted in community theatre productions as diverse in nature as Shakespeare’s ‘Hamlet’, Neil Simon’s ‘Brighton Beach Memoirs’ and Jean Paul Sartre’s ‘No Exit’. He has also dabbled in screen work and has recently recorded a soon to be released audio book. In ‘The Doll’ he is Barney, just wanting to have a good time and becoming increasingly frustrated. Connor performed well in the role.

Martin Grelis has had over thirty years acting experience. Highlights include his Shakespearean roles Sir Toby Belch, Prospero and Paris, his screen work which includes ‘The Matrix’, ‘Soft Fruit’, ‘Water Rats’ and ‘Rake’. By playing Roo in ‘The  Doll’ Martin is playing his third role with the Genesian Theatre Company after ‘You Can’t Take It With You’ and ‘On Monday  Next’.  Grelis drew sympathy from the audience playing a proud man who is going through a mid life crisis with no clear path to the future.

Hamish MacDonald migrated to Australia from England as a boy and grew up on the Sunshine Coast. He has performed in  various stage productions including  ‘Death Of A Salesman’ and ’12 Angry Jurors’. MacDonald has been on the Genesian stage once before in Agatha Christie’s ‘The Secret Of Chimneys’ in 2021.  In ‘The Doll’ he plays Johnnie Dowd, the worker who has taken over Roo’s role in the cane fields. There’s tension in every scene he played in and he held ‘his line’ well.

There’s the heart wrenching scene when Olive bangs her fist against Roo’s chest, saying, ‘I want the old life back, the life that we had’. Roo is not able to respond.

Oh, the transitory nature of things…

This is a chance to see the first great Australian play. SUMMER OF THE SEVENTEENTH DOLL is playing the Genesian Theatre, 420 Kent Street, Sydney city until the 20th August 2022. Performances Fridays and Saturdays at 7.30pm and Sundays at 4.30pm.