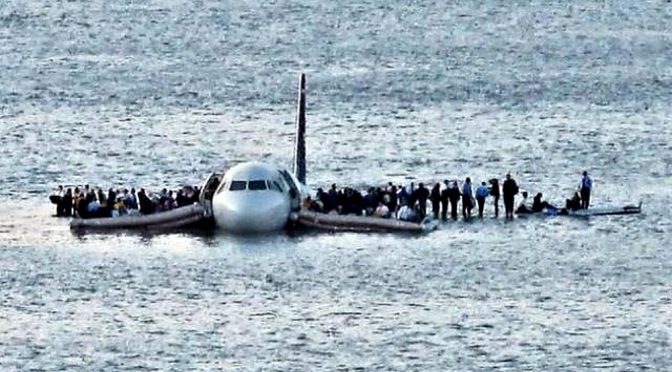 Tom Hanks’ prior to this movie has depicted a number of real life heroes, the titular Captain Phillips, Walt Disney (Saving Mr Banks), James B Donovan (Bridge Of Spies), and it makes a nice bookend to Apollo 13 where he starred as another pilot, Jim Lovell, who must also overcome a life threatening crisis.

The film is based on Chelsey Sullenberg’s 2009 memoir Highest Duty and is co-authored with Jeffrey Zaslow. Numerous commentators are calling Tom Hanks the Jimmy Stewart of our era. Here Tom Hanks plays Sully the pilot of the passenger plane that landed on the Hudson River in New York on January 19, 2009 saving all crew and a 115 passengers on board.

This film depicts the aftermath, with a dour self doubting Sully suffering post traumatic stress syndrome, sleeping badly, and suffering nightmares. Heb takes insomniac runs to 2 am New York accompanied by his co-pilot Jeffrey Skiles, played by Aaron Eckhart. In trying to cheer Sully up, in what is a one note performance by Hanks, Eckhart steals most of their scenes together.

86 year old Clint Eastwood directs in a fast, no-nonsense, economical style and for the first time in his career in an IMAX format. Surprisingly, SULLY represents the first time that Hanks and Eastwood have worked together .Laura Linney has the thankless task of playing Sully’s wife. Linney’s scenes consist of her hanging on the phone asking Sully ‘are you all right?! I love you.’ The two actors never met on set.

In many ways, this is a classic Western movie in the tradition of High Noon, Rio Bravo, and Clint Eastwood’s numerous cowboy roles. The Gary Cooper/John Wayne/Clint Eastwood style of character, unsupported by a town or the Law but with a faithful sidekick, faces down a band of villains and against all odds prevail. In this case the baddies are the National Transport Safety Board (NTSB)who are determined to brand Sully as incompetent and negligent in not trying to land the plane at nearby airports. Needless to say he is vindicated.

Several newspapers including The Guardian and The New York Times have criticised the depiction of the NTSB as a villain, when in fact it was the Board who sought to exonerate Sully. However, this is entertainment and every protagonist needs an antagonist. Lest we think that Sully is just going to be a courtroom drama, Eastwood recreates the crash which was caused by a bird strike. In doing so he opens up the film to incorporate ‘other heroes’ – the desperate flight controller, the ferry master racing to the crash scene, the rescue helicopter pilot and divers, and the brave flight attendants.

Despite some reservations, SULLY is highly entertaining, packs a lot of issues and actions, and before it gets a chance to be overly sentimental, it is over in ninety six minutes, Eastwood’s shortest film. Stay for the credits as you will see highly enjoyable scenes  of the real Sully and his wife reuniting with some of the passengers that he saved.