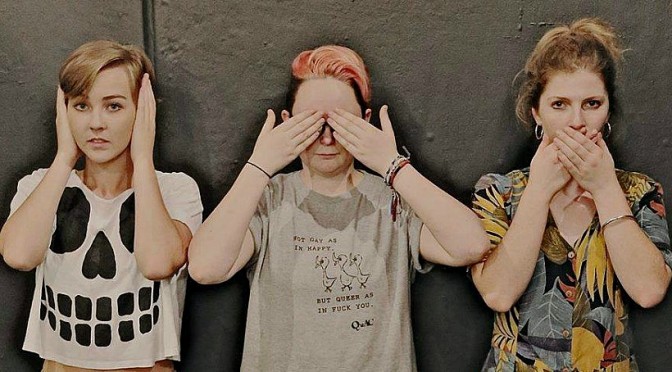 I really enjoy student theatre. It can have energy and enthusiasm. Often there are new ideas and original perspectives. The best of it has a fresh approach to the mysterious art of pulling an audience into the characters’ world. Admittedly, I get to see some student shows that I just grit my teeth and suffer through silently, begging for it to end. But not always. Sometimes I encounter a little event that really makes my instincts tingle. WHEN GOOD MEN DO NOTHING by Sydney Uni Drama Society is such a work.

This show is essentially a series of 6 monologues, often overlapping, which according to the program, ‘explore an individual’s discovery and decision –making’. The monologues present a woman’s decisions after being accosted by a resident of ‘Suicide Towers’; a person with a racist boss; an umbrella fighter in the rain who obviously needs help; a personified building and a starfish just floating with the tide.

There are three performers, one of whom is standing in a white square in the foyer, boiling a jug when the audience arrives. In the performance space are 2 others who are on chairs in the corners. After the jug boiler arrives in the black box we are locked in.

This really is a black box, even the operators are hidden behind black. The director, Clemence Williams, has the seating placed facing either the black costumed character or the blue or the grey. And you can’t necessarily see each of the speakers. The small rostrum in the centre of the room has each second chair facing the opposite way to the first. Because of this, the audience hears rather than experiences at least one of the trio. That disembodied voice is a bit like a radio play.

Fortunately, the writing is good. Very good. “Don’t leave me with the racist boss, then I’ll look racist.” gets to the heart of the decision about jobs and standing up for the right thing. “I’m a good person, isn’t that enough?” goes without reply. I’m not sure the title clearly represents what playwright Sophia Roberts is hoping people take away but it is a catchy title and this is a skill in itself. Also a subtle unifying ‘something’ between the monologues might gently enhance the cohesiveness of the work without making it a traditional piece.

Roberts writes comedy really well too. There is lots of fun in this show. The instant noodle riff is hilarious in places and is written with that perfect kind of stoned insight into our acceptance of faults and flaws. Charlie O’Grady does a great job of bringing out the humour of this section. Charlie is a dynamic force but in the several shows I have seen this young artist in, sometimes struggles to adopt a character. It’s always a committed performance though.

Julia Robertson and Meg McLellan are the other sides of the triangle. Roberson is bold and unafraid in her performance but needs a little work on her diction. The director might need to help her reduce some of those pauses, too. She makes the emotion very, very clear but tries to travel it though silence, a technique which doesn’t work if used too frequently in a piece.

McLellan is the strongest of the three. She has considerable stage presence, handles business well and has a great voice which she uses in well-modulated ways. Her body language shows potential too especially in the limited space. Occasionally though, there was some lack of purpose evident in her head and eye movement. Since the characters talk at us, the director or the playwright might consider giving the audience a clearer understanding of who we are and why they are talking to us.

WHEN GOOD MEN DO NOTHING at the Cellar Theatre, Sydney University Campus, runs at less than 30 minutes and it fits neatly into that time frame, any more would just be padding. It’s a good work.

The show finishes its brief run tonight but I hope there is a remounting as I am keen to see how this show progresses. There is a lot to see from SUDS this year. Their season includes a work about mental illness and another about the body in artistic expression. Also, there is what reads as an exciting re-imagining of William Shakespeare’s Richard III and Henry VI Part 3.