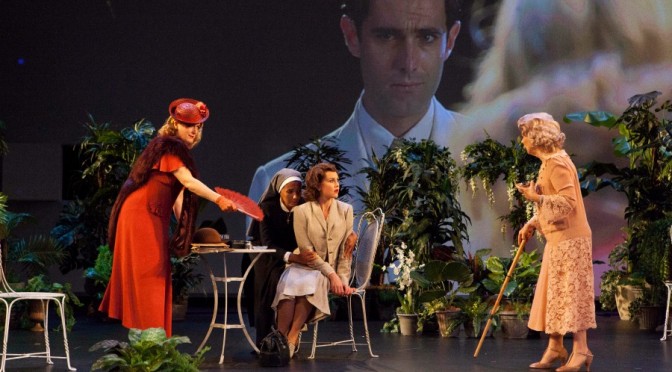 This current Sydney Theatre Company show at the Opera House has that wow factor.

Kip Williams stunning production of Tennessee Williams brilliant play is a must see.

Within  a few minutes of the play starting we are completely immersed in Williams’  disturbing, hypnotic world.

The play’s title refers to the death the summer previous of Sebastian Venable. Whilst we never get to meet Sebastian on stage, the play is all about charting Sebastian’s journey, telling his story, and the terrible circumstances surrounding his  death.

The play is set in the 1930’s and the action takes place in the Venables family home and garden, and in a psych rehab facility.

Kip Williams wins strong performances from everyone in the cast.

As Violet, the protagonist, matriarch and Sebastian’s possessive, controlling mother, Robyn Nevin is a powerhouse.

Violet’s  attempts to control Catharine centre around silencing Catharine and her view of Sebastian’s demise. Enter the Doctor, played convincingly by Mark Leonard Winter. Violet tries to convince the good Doctor that Catharine is very mentally ill and is in need of drastic treatment, nothing short of a lobotomy!

Melita Jurisic is  excellent as Violet’s very anxious housemaid who creeps around the house, never quite sure where the next drama is going to come from.

Kip Williams superb use of live video, which captures every nuance of the actors performances, heightens the impact of Williams’ drama.  As does the great work of the rest of the creative team including Alice Babidge’s superb set design, in particular the ‘jungle’ garden, Damien Cooper’s sharp lighting design, and Stefan Gregory’s eerie, atmospheric soundscape. Dialect coach Charmian Gradwell’s competent work ensured that all the cast held their southern accents well.