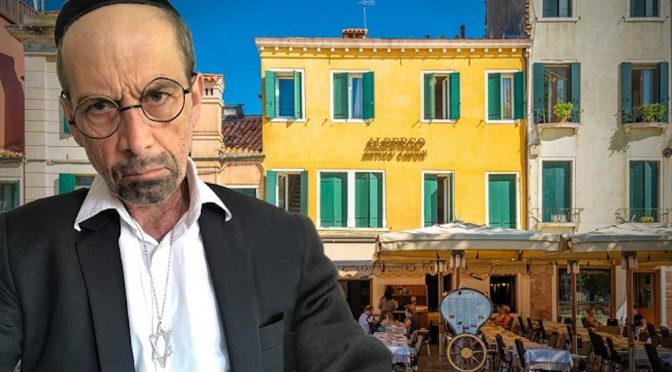 In this era of the Covid pandemic, the latest production by Streamed Shakespeare , a Sydney company that was formed roughly five months ago , is Shakespeare’s THE MERCHANT OF VENICE .

It has been updated and adapted somewhat with the use of adroit asides , mobiles , and a fun aside of a TV show ( Wife or No Wife ) and a huge banner headlines of newspapers for example ( plus the daily TV news ) and a little adjustment of language at times all to make it relevant to today’s audience. But under the direction of Roslyn Hicks close attention is paid to the text, poetry and pacing of the production.

Much use is made of the split screen and multiple characters appearing simultaneously, mobiles held up to the screen to show who is calling and so on.(Technical direction by Thomas G Burt , edited by David Castle.) The various technological effects help in defining location as well as allowing multiple characters to appear in a scene . Rings or important documents (for example) are passed between characters at the blink of an eye.

We enter a world of high flying merchants , money lenders and traders , of racism, Jew vs Gentile, a dominating patriarchy, mistaken identities , maladjusted families , ruthless business and passion and intrigue. There is ‘ us’ vs ‘them and vengeance vs forgiveness.

All the cast performed with great panache and engagement.

Geoff Smirnai’s Shylock was portrayed as a ruthless CEO , smooth and charming on the outside but rigid and implacable underneath. The contract with Antonio is made jokingly but he is fiercely determined and becomes volcanically angry .His ‘if you prick us do we not bleed ?‘ speech was powerfully delivered.

Antonio was played sympathetically and philosophically by Haki Pepo Olu Crisden. He was nobly serene and resigned to his fate.

The two main women,  Portia (Jess Loudon) and Jessica ( Chiara Osborn) are delightfully played . Portia is trapped by the stipulations of her father’s will , Jessica by her father Shylock. Both take chances and break social boundaries .Portia is most astute and her ‘ Quality of Mercy’ speech tremendously delivered.

Nerissa , Portia’s maid, was infectiously played by Holly Champion . There are some deliciously catty , acerbic comments made between Portia and Nerissa.  She observes with droll fascination Portia’s situation and her strategies to help rescue Antonio.

But when the rings are discovered to be missing – watch out!

Bassanio (Jamie Collette) was charming – at times self conscious but strong in his love for Portia and a stalwart friend to Antonio.

Lorenzo (Jim Southwell) was a sweet, amiable match for Jessica .

Streamed Shakespeare’s ‘The Merchant of Venice’ is available online.