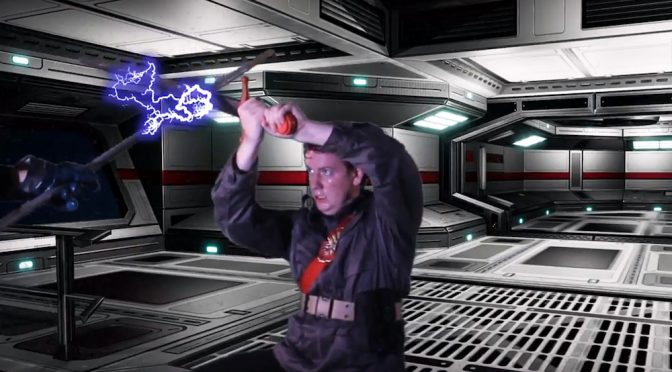 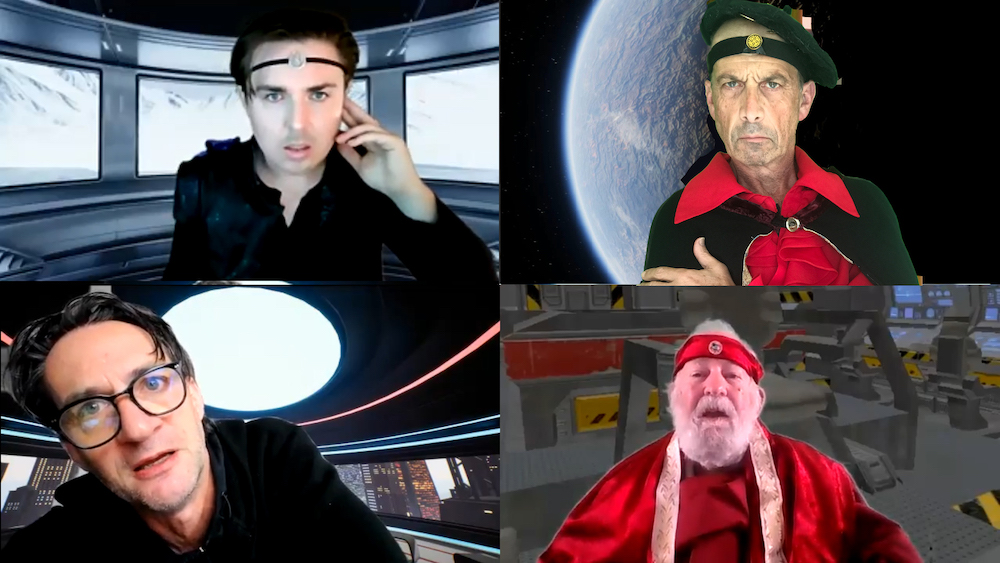 Streamed Shakespeare, in a production directed by Haki Pepo Olu Crisden , has brought us a terrific production of both parts of Henry IV.

The civil strife has been updated to 2402 and is very Star Wars in presentation, with plenty of special effects, ‘ alien’ makeup, aerial views of planets, impressive spaceships, exciting battles, and which include a touch of Blade Runner.

The digital set elements, as directed by Alex Perritt, were very effective. The ‘house stye’ of the use of split screens is continued.There is some doubling of roles ( which are gender fluid) and use is made of R2D2 like robots as waiters , messengers etc, and electronic comm links. David Castle’s sound effects and Paul Bremen’s score are also integral to the production

The many layered production is finely meshed, with its jumping from Henry’s court to the plotting rebels, to the Boar’s Head scenes with Falstaff, and the idlers,  much to King Henry’s consternation.

The politics, power shuffles, twists and treachery on both sides – those faithful to Henry IV and those joining with the rebels – lead to major quarrels and battles.

Sue Broberg was imposingly authoritarian as the darkly plotting Archbishop of York. The various Lords and followers of both sides were given stalwart performances.

The acting was very impressive – a terrific cast was led by Charles Mayer as anxious, disheartened King Henry IV, who was splendid. He strives to be a good king and settle the country into peace.

The themes of the hardship, duties and responsibilities of kingship are emphasised throughout and contrasted with the scenes in Eastcheap and Prince Hal’s pranks, showing how Hal changes. The theme of father/son relationships is also extremely important.

Prince Hal (the future Henry V) was given a wonderful energetic performance by Tristan Entwistle. We see his boisterous roistering with Falstaff. The final scenes between them, their quarrel and reconciliation were mesmerising.

We are warned from the start in Part 1 that he will distance himself from Falstaff and his cronies, with Falstaff saying ‘do not banish Jack Falstaff ‘and Prince Hal ‘saying I do I will’ – which he does at the end of Part 2 at his coronation as Henry V, when he has transformed himself into a goodly, stalwart king and denies knowing Falstaff.

Falstaff was magnificently played by Asalemo Tofete – a fat, corrupt, blustering slippery seal, oozing superficial charm, always just one step ahead of his creditors, who think he can sweet talk his way out of every situation.  In Part 1 he has the famous speech,  ‘what is honour ‘ and ‘discretion is the better part of valour’.

Alex Perrit gave a tempestuous, vehement performance as volcanic, impetuous Henry ‘Hotspur’ Percy .There was a very touching scene in Part 1 between Perritt and Angie Gachomo as Lady Percy.

The battle between Henry Percy and Prince Hal was very effective. Prince Hal’s tribute speech very moving .
At the Boar’s Head quick witted Mistress Quickly (with a rather piratical yet futuristic eye patch) was given a vigorous performance by Susan Jordan.

Each part is roughly 2 hours 30 minutes so just over five hours in total.