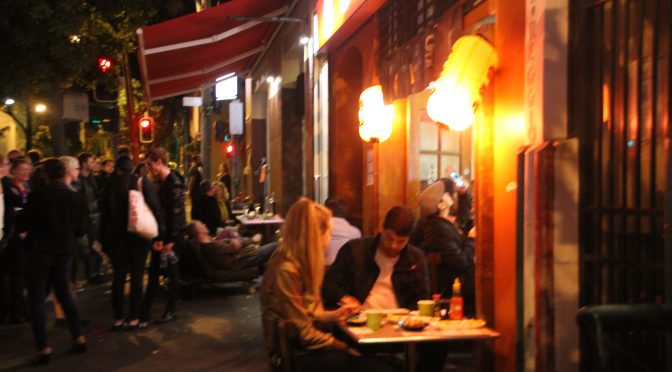 Pasta Gulch (Stanley Street East Sydney) was even livelier than usual as on the third of September the Fringe Festival party visited this Italian cuisine mecca.

The footpaths were packed as foodies spilled out onto the road. The street was lined with musicians from the weird to the conventional to the super cool.

The weird was provided by The Prophets, a band that performed boppy tunes in bizarre masks, to folk practitioner  Brian Campeau and also Matilda Abraham to the smooth jazz of The Jonathon Zwartz Trio.

The Lord Roberts Hotel hosted the hot electric piano of Rai Thislethwayte  as well as the dance grooves of Old Man Funk.

For  connoisseurs of the avant garde, the guitar and drummer duo Showa 44 played discordant music in the window of Bar Reggio whilst a few shops down, Alice Terry serenaded onlookers with her brassy blues voice.

If that was not enough entertainment street performers roamed up and down the Block enveloping themselves and onlookers in a gold foiled blanket as well as adopting enigmatic poses and strides.

The Fringe Festival got off to a flying start  as Sydney Fringe inhabits its home town for the rest of September with highlights including at Camperdown Park, a Silent Disco in World Square, complemented by a Silent Dinner in the Paddington Town Hall and the inauguration of a new arts precinct Off Broadway in Annandale.

The final September weekend will climax with the Global Rhythms concert in Bi-Centennial Park, Glebe.

Full details can be found at http://syndeyfringe.com.