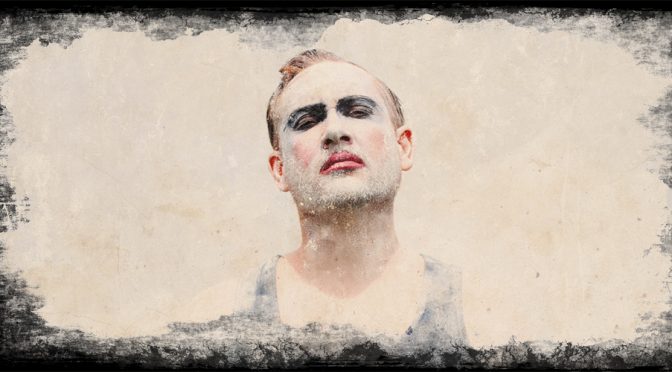 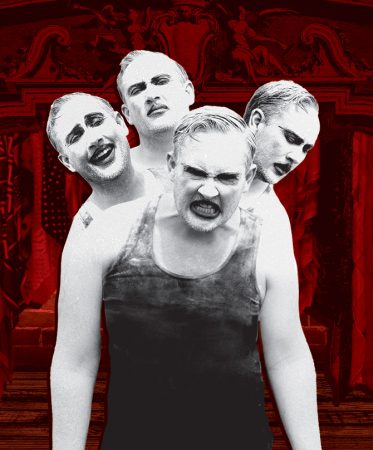 HERRINGBONE marks the welcome return of Squabbalogic to Sydney stages.  Award-winning director, performer and Artistic Director of Squabbalogic, Jay James-Moody,  will be assuming the title role of Herringbone and the ten characters that live inside him at Kings Cross Theatre in January.  The Guide had great fun chatting with Jay about this unique and odd show.

I just did a year and a bit as a standby on The Book of Mormon and so I spent a lot of time in my dressing room. So I was looking for a little challenge to stretch those acting chops that had been unused for a while, and this seemed like a nice meaty one to try and bite off.

SAG:                And you have a  co-director in Michael Ralph who is perhaps more known as a choreographer, will this be a highly physical show ?
JAY:                  It may well be. There’s a lot of physicality in George the 8 year old who’s a bit of a dancer. That’s where I’m going to be most stretched because I don’t consider myself a dancer, even though I have spent a lot of time in musical theatre.

Having worked with Michael before , he choreographed a show I directed for WAAPA a couple of years ago, he’s got an incredible eye for detail and he is also tough in the most wonderful way. He pushes you to work really hard so when I decided I wanted to direct this with someone, considering I was in it, I thought he was only person to do that. For him to bring his physical eye to the show is really going to benefit me and make me look much better than I am probably.

SAG:                In that space you really need to have someone who gets sightlines haven’t you?
JAY:                  That’s right and it will be great there. I’ve had this show in my head for a really long time and when KXT crossed my mind I thought great. But I’ve never worked in a traverse format before. So this is certainly a big challenge and I knew that it needs someone with a strong understanding of the space … while I concentrate on keeping my characters together.

SAG:                And the lighting and sound is going to be really important there too?
JAY:                  And we have such a great team, people I have worked with before. Ben Brockman who worked on Man of La Mancha with us, my wife Jessica James-Moody who is a Helpmann nominated sound designer. So that’s my trick to get great people around me.

SAG:                I think people will be pleased to have Squabbalogic back, and part of the Seymour Centre season next year. What on earth is a pre-world premiere?
JAY:                  (Laughing)  Well we are calling it a pre-world premiere because it’s going to be a development presentation. So … a version of the show that we have in our hands at the time we put it on but then it’s going to go back into further development and rehearsal. We wanted to get a sense of what kind of legs the show has and what kind of audience appetite and interest there is in this story. We think people will find it fascinating.

SAG:                Is it a musical or a straight play ?
JAY:                  It’s a musical … but not a traditional musical I would say. It’s probably going to be more like a play with songs. But we have a number of those already in demo phase and I’m so excited by them. We are nothing if not ambitious and we have taken cues from recent successes like Hamilton. And I think Laura Murphy who is writing the songs has done an extraordinary job and you will be really surprised. And such catchy tunes too.

SAG:                Too true. So back to Herringbone, what does the title refer to?
JAY:                  The story is told by the character of George Herringbone and he is the 8 year old but we are meeting him as a grownup. He sort of flashes back and discusses his very unusual childhood and Herringbone, we find out in the play, is his adopted stage name. And it’s named after his suit that his father buys him when he tries to push him into show business. He decides he doesn’t like the sound of a worsted suit but he really likes the sound of a Herringbone suit.

SAG:                I see. It’s described as Southern Gothic so you are dealing with an accent as well ?
JAY:                  Yes and a range of accents as well. Some of the characters are southern and then we also have a vaudevillian mentor who has an affected British accent and then the malevolent spirit that enters George’s body, he has a kind of really harsh New York accent and a lady in it is from California. I’m jumping all over the map really, so I’m working on getting it straight and getting my tongue around all the different phrasings of the words.
It’s a fascinating challenge for me actually but I’m really enjoying it.

SAG:                And you would have had to do a lot of research on US vaudeville.
JAY:                  There’s a lot of great material in the script to draw from and the music … it’s terrific the way it captures the period so well. And there’s some wonderful imagery you can find plus Michael is very steeped in the eras and styles of dance so he will be able to inform a lot of that.

Costume changes physicality as well. It’s amazing what putting on a pair of suspenders and a waistcoat does, it really transports you back in time.