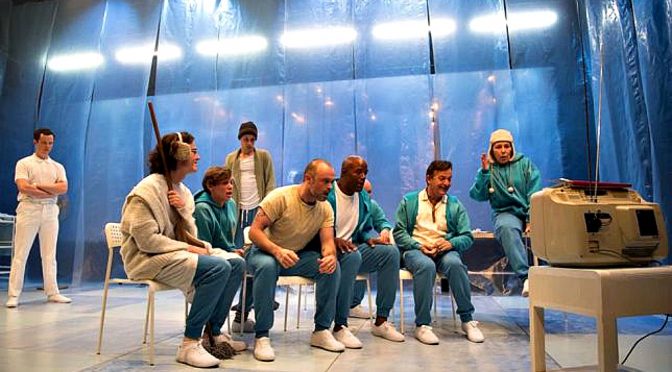 The main allure in seeing Sport for Jove’s production of Ken Kesey’s ONE FLEW OVER THE CUCKOO’S NEST, as adapted for the stage by Dale Wasserman, is seeing a fine group of actors showcase their acting talents playing Kesey’s colourful, quirky characters.

Anthony Gooley is compelling in the role made famous by Jack Nicholson. McMurphy is a small time crim, who chooses to spend his allotted time in a psychiatric hospital rather than a prison. He can’t believe what he finds when he enters the institution – the patients are ‘vegetables’, sitting around, doped to the eyeballs.

McMurphy makes it his mission to shake the guys up. In particular, he wants them to stand up to the psych nurse from hell, Nurse Ratched. He, of-course, leads by example, constantly baiting  her. McMurphy and Nurse Ratched make for classic antagonists.

Johann Walraven plays the weak, easily manipulated Dr Spivey who, at first, McMurphy wins over with his vibrancy, though the good terms don’t last.

Very early on McMurphy befriends Dale Harding, the rather reluctant unofficial leader of the patients. Tony Poli gave a strong performance as the awkward nervy, good natured, well educated man who quietly hopes that McMurphy can make a lasting change to their lives.

Always on the lookout to shake people up, McMurphy makes it his mission to crash through Chief Bromden’s wall of defences when he finds out that the he hasn’t spoken a word since he was first admitted to the hospital.Through the show one has one eye on Wayne McDaniel playing the Chief’s as he stealth like   goes about sweeping the ward floor whilst eavesdropping on all the conversation.

With a bit of bribery McMurphy manages to get one of the night nurses to agree to  allow a night-time party including a few loose women and plenty of supplies of alcohol from the hospital pharmacy.

It is a one hell of a party and the very timid, stuttering, and under his mum’s thumb Billy Bibbit, well played by Travis Jeffery, loses his virginity to Candy Starr, played by Bishange Vincent,one of two tarty, good time women, along with Sandra, played by Felicity Jurd, that McMurphy brings to the party.

Nick Rowe and Matilda Rowe play wardens, Warren and Williams, who act more than just a bit slowly when McMurphy tries to strangle Ratched after she rages away at him.

Lawrence Coy, last seen at the Old Fitz in This Much Is True, plays another volatile character who has a thing for explosives. Wendy Strehlow plays the loud mouthed Cheswick. Stephen Madsen plays the freaked out Ruckley, spending a lot of his time on the ward, pinned up against a wall, thinking that he is Jesus on the cross. Joshua McElroy plays the delusional, self effacing Martini.

Kim Hardwick’s production is a fast paced 100  minutes as the action escalates to its cathartic conclusion. I thought that her choice to have the  suffocation scene played with it’s back to the audience worked well and gave it a greater resonance.

Isabel Hudson’s set conveyed conveyed the sterility of the hospital environment. The hall corridor walk that she incorporated into the design was always foreboding. Whenever Nurse Ratched and her staff started the walk to the ward one knew that ill tidings were  in store.

Recommended, Sport for Jove’s production of ONE FLEW OVER THE CUCKOO’S NEST is playing the Reginald Theatre, Seymour Centre until 19th August.