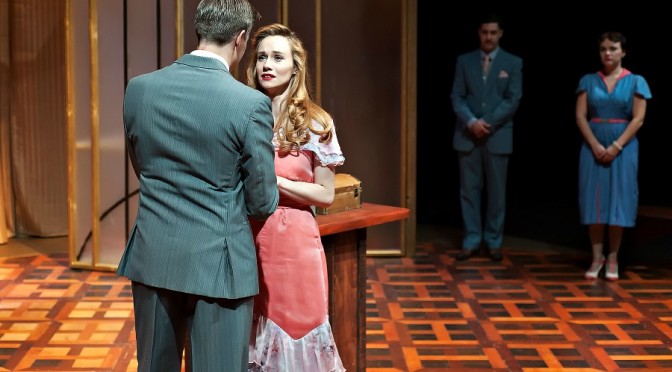 Under the excellent direction of Richard Cottrell Sport For Jove have brought us a most impressive, tense version of one of Shakespeare’s troubling plays, THE MERCHANT OF VENICE. Although classified as one of Shakespeare’s comedies, with a mostly happy ending, there is plenty of sinister drama happening behind the scenes.

This production, with the play a little abridged, is slickly and briskly delivered.

This Shakespeare play examines issues of hate, greed , resentment, racial intolerance and seeking revenge for long held grudges, but also shows the other side- the need for compassion and mercy.

At the centre of Shakespeare’s THE MERCHANT OF VENICE is its troubling anti-Semitic portrayal of the main character, Shylock, the Jewish moneylender. Nowadays productions have to consider adjusting their versions to be acceptable to contemporary views while still remaining faithful to Shakespeare’s original. As the production is set in pre-WWII, we are encouraged to see Shakespeare’s aspersions in a context relating to the rise of Nazism.

John Turnbull as Shylock is fascinating– he is cold, implacable and chilling in the courtroom scene. Full of vigour he is sinister and dangerous.Yet we also see good sides to his character and can, to some degree, sympathise with his lust for revenge without mercy. It is a stylish , mesmerising performance at once precise and, at the same, time powerful.

Portia, played by the beautiful Lizzie Schebetsa, is elegantly portrayed . Portia is shown as thoughtful and extremely clever revealing an intelligence and strength that continues throughout the play. Her famous ’Quality of Mercy’ speech was very impressive .

As Portia’s true love Bassanio, the very handsome Christopher Stalley was resolute, bold and determined- a delight to watch.

James Lugton was quiet and understated in his delicately nuanced and measured performance as Antonio, the eponymous merchant of the title who stands to lose everything.

There was fine ensemble work from the supporting cast. Special mentions…Michael Cullen who showed excellent comic timing playing Lancelot Gobbo, Bassanio’s servant and one of Shakespeare’s clowns. Lucy Heffernan as Jessica, Shylock’s daughter, was sweetly determined and enchanting. Jason Kos was stalwart as her suitor Lorenzo. Aaron Tsindos revels in his over the top portrayal of the arrogant Prince of Morocco, almost stealing the show.

Summing up, this was a very challenging, thought provoking and exciting production of this dark Shakespeare comedy.

Running time 2 & ½ hours including one interval.

Sport for Jove’s production of THE MERCHANT OF VENICE is playing the York theatre at the Seymour Centre until Saturday 30th May.

For more about this production visit http://www.sportforjove.com.au.