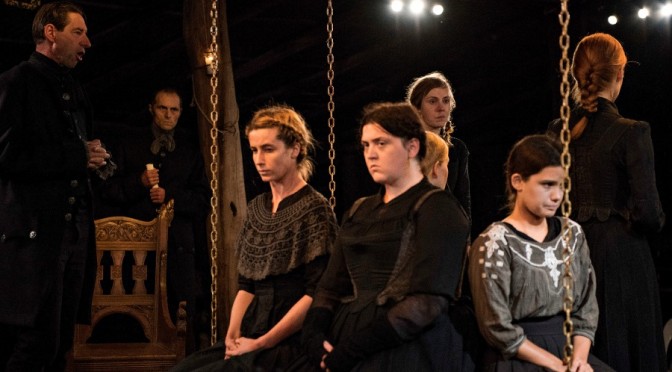 It was only as I started my car engine to begin the trip to the performance tonight that I realised I wasn’t carrying any tissues. On my wander back to the house, I wondered … would I really need them? THE CRUCIBLE always makes me cry and it is the Elizabeth Proctor character who is the agency of those tears but Sport for Jove’s production is at Bella Vista Farm. Perhaps the open, less intimate space of a barn wouldn’t really translate into the genuine emotion which Arthur Miller’s text brings out in me. In the event, it was lucky that I did go back. Tissues were required but the agency was unexpected.

In the 1692 Puritan community of Salem, Massachusetts, Betty Parris, one of the town’s young women, has been struck down with a strange illness which leaves her unable to speak or move. Her friend, Abigail, confesses that the girls have been dancing in the woods with the West Indian servant woman, Tituba. Dancing combined with nakedness and drinking blood seem to have brought this illness on and its symptoms appear to be spreading among the girls. There is talk of witchcraft in the town and the Reverend John Hale arrives with the Malleus Maleficarum to root out evil.

The maelstrom of hysteria has Abigail at its centre. Local farmer, John Proctor confronts her. She worked for him until his wife, Elizabeth, threw her out after John confessed to relations with the girl. She has had her emotions and ways of thinking opened and she sees the hypocrisy all around her. Her control over the other girls will be her weapon to punish Elizabeth and the town as she explores her power to create chaos. Focused only on the apparent rise of evil, the witch hunters’ trial and subsequent hangings will touch every person of the village. Even the good John Proctor.

THE CRUCIBLE is famously a parable about the U.S. House of Un-American Activities’ mid-20th century witch-hunt of supposed communists and communist sympathisers. Playwright Arthur Miller had a genuine interest in the actual Salem witch trials and wrote the play to draw the parallels with his own era. In the program notes, director Damien Ryan goes further to parallel the story with our own global circumstances. Ryan invokes figures like Anwar Ibrahim and Edward Snowdon to support his contention. Whether you agree with him or not, what his direction gives the play is a view wider than the intimacy of John Proctor’s story.

The experience begins with travel through the small period mansion on the site, passing the gallows and the hay dray on the route there. Here we meet the characters in their natural environment as they stand or sit in poses expressing their place in the story. As we travel back to the old wool classing shed we pass the girls dancing around the boiling potion and our horrified guide assures us that such things are not acceptable to this community.

Ryan has already pulled the audience out of the traditional theatre space. He does this further by using a theatre-in –the-round raised stage in the shed (designed by Anna Gardiner) and by having his actors deliver dialogue from outside and around the slab building. And finally by inviting the audience outside to witness the events leading up to the shocking finale.

Where he also excels is how he allows his audience to encounter the lighter, even comic, aspects of the text. Giles Corey, for example, is not the usual vicious old fool but curmudgeonly and charming in the way of old men who have no self-awareness. There are quite a few laughs in this show before the story closes in. But where this deft touch really pays off is in the first meeting between Proctor and Abigail. They share a soft moment and a knowing smile and we see clearly what is at the heart of the matter before John asserts the good husband in himself.

As Abigail and Proctor, Lizzie Schebesta and Julian Garner have real chemistry from the beginning. Before Proctor’s entry Abigail is unreadable. By turns she is devious, empathetic, manipulative, concerned for Betty (Emma Chelsey). Schebesta uses her height to good effect to lord over the gaggle of girls but when John enters she looks small and thin against his bulk and when she hits him with her fists the noise is shocking but the blows ineffectual.

In contrast, the first time we see Proctor and Elizabeth (Georgia Adamson) together, their forced conversation and stilted reactions show a couple trying to be kind. Adamson clearly expresses the desperation Elizabeth has to forgive someone she knows to be a good man. Her work here is a fine bedrock for both the trial and the name scenes and Garner has the exact blend of authority and self-doubt which makes Proctor the conflicted protagonist of those scenes.

All the acting is terrific here and the ensemble work of the village girls is truly exciting. Each has their own character but the hive mind that allows the mass hysteria is evident from the first time we meet them as a group. Once again, cleverly directed, this is re-enforced by their entry at the beginning of Act Two. They stand and watch for a few seconds, just large white faces in a sea of black costuming outside a square of light. The costumes, designed by Anna Gardiner, are wonderful in this show. Black, grey and brown they are unrelentingly dull but the detail! Buttons, mittens, scarves, embroidery, scallops on the corsets. Each piece created by a loving hand.

And the tissues? That was Mary Warren (Matilda Ridgway). She ripped my heart out when this serving maid told Procter to treat her with respect. I was mesmerised by the strength it took to attempt defying Abigail in the courtroom. Ridgway is still and present and silent and universal. When she takes Mary Warren back into the darkness, I was so sad for all the women who can’t leave their circumstances.

THE CRUCIBLE continues as part of Sport for Jove’s 6th Annual Sydney Hills Shakespeare in the Park and Leura Shakespeare Festival until 30th Dec at Bella Vista Farm and January 10-25th at Leura Gardens.

For more about The Crucible @ Bella Vista Farm, visit http://www.sportforjove.com.au/theatre-play/the-crucible