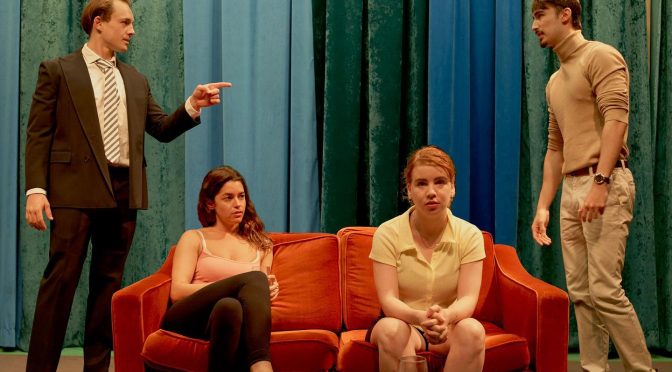 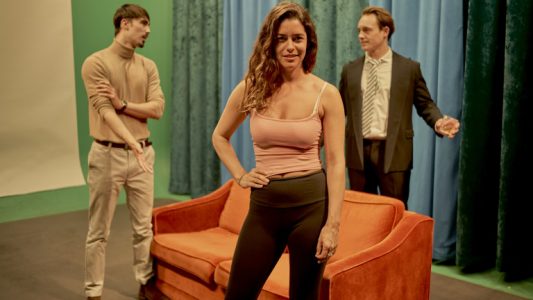 It’s a shoo-in. Or should that be “shoe-in”? The most compelling reason to see this production of Theresa Rebeck’s SPIKE HEELS is Jessica Saras’ portrayal of Georgie. Bruised, embattled, beseeching, bristling and bravura, it’s a boots and all performance, delivering a knock down flamboyance with a drag out authority.

Last seen on Sydney stage bequeathing us a brilliant Banquo in Wyrd: Season of the Witch, Saras deserves, indeed, demands to be seen.

Hot on her heels in the performance stakes is Joshua Horwitz as Edward, a bracing, breezy performance dosed with braggadocio.

These two give such leonine realisations that the other two characters in the play, Andrew and Lydia, tend to bleat in their shadow, lambs silenced by the prior pair’s roar.

SPIKE HEELS plays like Pygmalion out of In The Company of Men, kicking out at the deplorable coercive control men seek over women.

Two blokes, educated, erudite, Andrew an academic, and Edward, a born to rule barrister, both examples of Homo Erectile, rather than Homo Erectus. Both claim to be upright. Both claim souls. But both are heels.

They would protest too much that they have behaved shabbily towards Georgie, a waitress turned secretary, a sort of social experiment conspired by the two men. But as the world weary foot sore Georgie sagely says: You guys, for all you know, you know shit.”

Still, Georgie has affection for one of them, that strange affliction of attraction to the undeserving. Both chaps seem programmed to predatory patriarchal behaviour, they need to be the pursuer and if the female pursues or initiates, she is labelled a slut.

The pacing of this production is slipshod. High kicks and strides are undermined by pedestrian transition and scene change. A simple design element would have eliminated the need for an interval and kept the vim and vigour with the velocity it needs to maintain.

SPIKE HEELS, first produced thirty years ago, certainly still has something to say, because, alas, there are still many heels to be spiked.