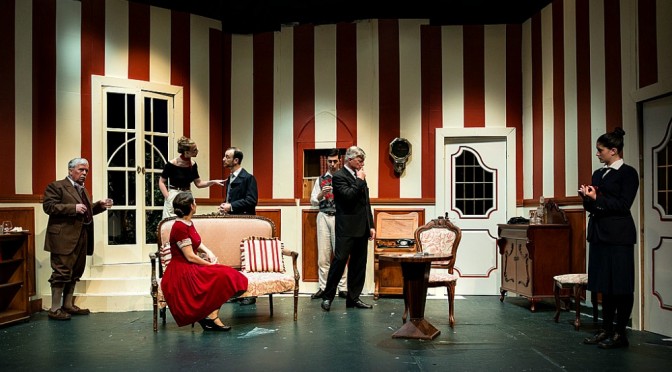 With a set design and directed by Ylaria Rogers the Genesian Theatre’s production of Agatha Christie’s Spider’s Web is a thoroughly enjoyable romp. We know one or more of the characters will be murdered, but how & why & by whom? Everyone has something to hide but can we solve the mystery before the last clue is given and the final twist unfolds. Probably not!

The action takes place in the drawing room of a country house Copplestone Court in the 1950s. The set has the typical Christie secret passageway, a desk with hidden compartment and French doors opening into a garden for the possible quick entry/exit of suspicious characters. Well timed lighting ensures black outs occur just at the correct the moment to allow for dark deeds and menacing music hints at evils to come.

The main actors are all very confident and distinct in their parts. Julia Kennedy Scott as Clarissa Hailsham-Brown leads the cast with her enthusiasm, pluck and save the day attitude. David Stewart-Hunter as Sir Rowland Delahaye is the prefect solid English gentleman determined to save his ward Clarissa. To contrast this Vincent O’Neill plays the partly comedic role of Hugo Birch. The third member of this trio is Christopher Butel as Jeremy Warrender a young gentleman of uncertain position in the household. Then there is Susan Farrell playing Mildred Peake the tough gardener who sees and hears many things and Dominique Nesbitt who portrays Pippa the young step-daughter of Clarissa with childlike glee.

How could there be an Agatha Christie without a butler and we are not disappointed in Danny Nercessian as the apparently arrogant Elgin. Likewise police are essential with Martin Searles as the almost competent Inspector Lord and Isabelle Kohout his offsider Constable Jones. Completing this large cast are Tommy Deckard as Henry Hailsham-Brown the somewhat stuffy foreign office diplomat husband of Clarissa and Michael Heming the rather unpleasant present husband of Henry’s first wife.

The scene is set, the players take their places and the relationships among the characters are slowly revealed in Act One. Interval comes with high drama and we are left to solve the mystery as more of the web is revealed in Act 2 and we are shown what clues we missed from Act One. This is definitely recommended viewing if you want an escape into some light-hearted, fun entertainment.