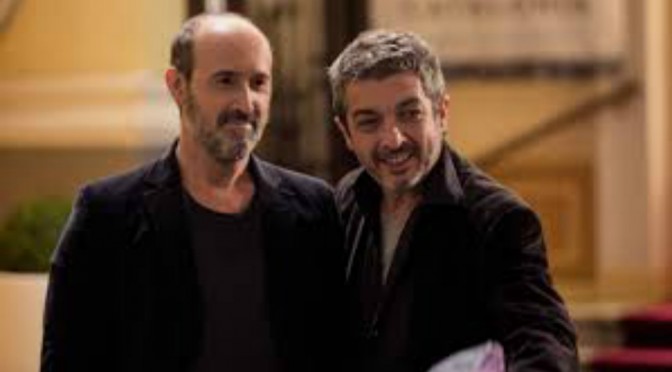 It’s not often you see a film willing to explore the depths of male friendship in the way that TRUMAN, the seventh feature from Spanish director Cesc Gay, does.

Set in Madrid, the film begins with Tomas (Cavier Camara), who lives in Montreal, returning to Madrid to visit his best friend Julian (Ricardo Darin), a stage and screen actor of Argentine origin and some renown who has terminal lung cancer, despite rounds of unsuccessful chemotherapy.

Julian, who is obviously past his prime, lives with his dog Truman, a larger-than-life but gentle and affectionate boxer, who sleeps with him and generally shares the minutiae of his life.Julian is suspicious of Tomas’ intentions in visiting him after all this time, believing he will try and talk him into continuing his treatment for as long as is humanly possible. However, upon realising that he only has four days to spend with him before he returns to Canada, Julian decides he’s going to make the absolute most of the time they have left together.

Tomas is generous to a fault, picking up every bill, while Julian is not, and while Tomas has all the best intentions, he can’t really relate to his friend’s situation and is willing to accept Julian’s decision to suspend his treatment and prioritise quality of life over quantity in whatever time he has left.

Julian’s cousin Paula (Dolores Fonzi) has taken on much of the responsibility of caring for Julian, and it becomes clear when reunited that she and Tomas have feelings for each other that have never been resolved.

Film festivals all over the world have showered TRUMAN with awards, and rightfully so. While its minimalist cinematic approach could almost have fit into the confines of a stage, TRUMAN works because of its sheer honesty. It’s a powerful, unadulterated story of real people at their most vulnerable having to face the greatest challenges life throws at us.

The script allows the actors to shine by never straying into sentimentality. Instead it examines what real friendship means in times of extreme adversity and how there is no right or wrong way to act, and in the end it doesn’t really matter because, as the tagline on the poster states, friendship lasts forever.

None of the characters are overblown. Tomas might be quiet, forgiving, and understanding, but Julian is not overly loud or bombastic either. He seems genuinely intent to make amends for past wrongs and to tie up as many loose ends as possible, leading to one particularly poignant scene with his son, who he drags Tomas to Amsterdam for the day to see.

The fact that Julian and Tomas haven’t seen each other for several years, how many exactly we can’t be sure, doesn’t matter either, reinforcing the premise that the bonds of friendship need not be broken by time and space.

Truman himself reinforces the unconditional love metaphor and one of Julian’s major preoccupations is his attempt to find his other best friend a new home. This leads to some interesting meetings with would-be adopters and provides the closest the film ever gets to light relief. Prior to that, he makes a special trip to the vet, Tomas in tow, to enquire about how animals grieve after loss and what can be done to make them feel better.

TRUMAN is not always easy to watch. It’s very long and very Spanish, in a Pedro Almodovar kind of a way, and by the end I was quite emotionally drained, but not in a bad way.

It’s not often you feel like you could easily be a fly on the wall (notwithstanding any language barrier), watching real people living out a compelling and at times heart-breaking story. Life, love and death are explored in equal measure, and without wanting to give anything away, this story is capped off by a near-perfect, if not happy, ending.

TRUMAN is raw storytelling at its absolute finest, and may just be one of those little gems that starts sneaking onto favourites lists in years to come.

TRUMAN is starting in cinemas on August 11.