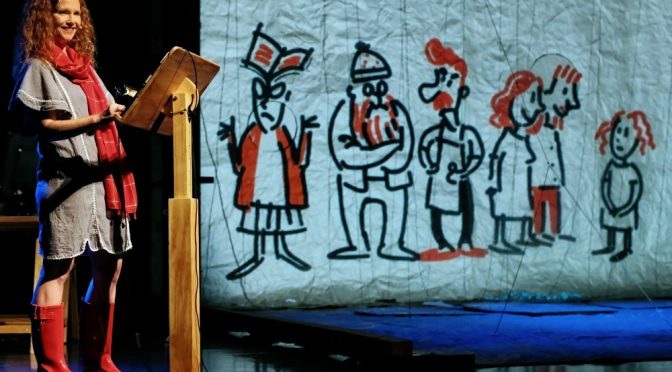 Written by Finegan Kruckemeyer and directed by Sam Routledge, the tale is told through the words of 12 year-old Eve, the narrator/actor (Raelee Hill). She is supported by a digital artist (Cathy Wilcox), a composer/multi-instrumentalist (Dean Stevenson) and a projectionist/ puppeteer (Felicity Horsley) with overall design by Jonathan Oxlade.

“In the ocean stood an island” narrates Eve a child who unlike other Proud Circle Islanders wonders about things beyond the island. She describes life on the Proud Circle Island as it is concurrently illustrated by a digital artist with cartoon characters projected on a white back sheet.

Proud Circle Island life is changed when the Island springs a leak. There is debate over the cause and solution. After several attempts to work things out internally, they row the Island into other Island’s waters.

Eve is the one who comes up with the best idea for rescuing the Proud Circle, and it is children who make first direct contact with the people of the Long Cliff, the land which provides refuge for Proud Circle.

The story is told by narration and digital cartooning. A projectionist shines the spotlight on areas under focus. Puppetry is used to add characters and ocean swell in the foreground. There is ingenious use of a paper set that is shaped, torn, mended and moved in serious childlike play. A multi-instrumentalist provides the appropriate soundscape.

All roles were performed expertly. The only aspect which this older audience member felt slightly irritated by was the amount of direct reading from a lectern which was carried out by the narrator, though thankfully she leave the lectern at times.

Both the narrator and the digital artist wore red gumboots, with the narrator having long red hair reflective of stereotypical, traditional fairy tale heroines.

This production allows the audience to add as many layers of meaning as one’s chronological age, experience level, and eco-socio-political stance may yield.

The show depicts the children as natural leaders and this has an obvious appeal to younger audiences.

The show is advertised as suitable for ages of 5 years and up and this was definitely appropriate as one could see the young audience members loved the digital art and the creativity inherent in the production..

A bitter-sweet story to be enjoyed on as many levels as you like. It would also be useful as an educational tool to prompt discussion.

The script  was co-commissioned by Terrapin and the Honolulu Theatre for Youth. The project has been assisted by the Australian Government’s Major Festivals Initiative in association with the Confederation of Australian International Arts Festivals, Ten Days on the Island, Darwin Festival, Brisbane Festival, Melbourne Festival, Sydney Festival and Terrapin.

This production toured Darwin, Brisbane and Melbourne in 2016 and is playing  at the Everest Theatre at the Seymour Centre in Chippendale until 21 January 2017.

Please Note: There is an AUSLAN performance available on Friday 20th January at 2pm – To access the AUSLAN service for this date, please book via Sydney Festival and use code: ACCESS2017