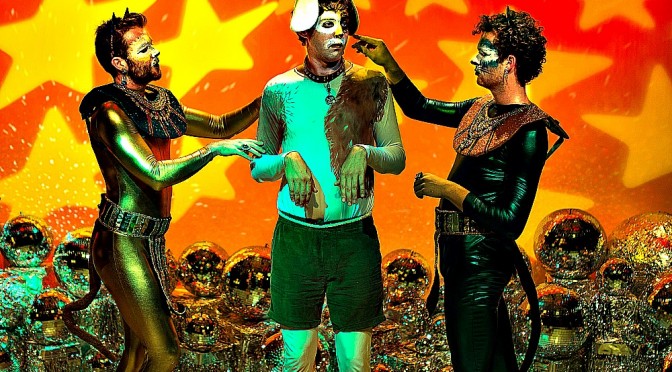 The Old 505 Theatre has been invaded by the Space Cats! This wickedly delightful, joyously subversive musical is cheekily puuurrrfect and is playing as part of this years’ Mardi Gras festival.

This show can  best be described as a sort of spoof of B- Grade sci – fi horror movies blended with off-the–planet musicals such as Little Shop of Horrors and The Rocky Horror Picture Show, and is played out in a spitfire yet elegant way.

Leika the first canine in space- here reimagined as a male- somehow crash lands on Cat Mars which is ruled by a mad, imperious Cat Queen (an exiled Egyptian cat goddess) who has three rather unwilling subjects– her slaves Bruno and Mars and Bin Cat who is in prison awaiting execution.

Leika finds herself with a moral dilemma: whether to unwillingly succumb to Queen Cat’s rapacious feline lust, or join Bin Cat in standing up, lifting a paw in defiance and then paying the consequences. Will Leika survive? Will Bruno and Mars be able to ‘come out of the closet’? What will happen to Bin Cat? Watch this space…

There are fine performances from all the cast who exude an excellent chemistry and confidence. Benjamin Brockman’s lighting is splendid. There is a terrific glittering mirror ball set for Cat Mars with some go-go cages thrown in for good measure, just in case you like that sort of thing…

The show features plenty of great singing and some slinky, sinuous choreography which is at various points is very Mardi Gras darlings, and at other times, acrobatic and demanding. The glittering, encrusted makeup and marvellous costumes- the cat ones have faux Egyptian like collars- are wonderfully detailed.

SPACE CATS features a witty, biting script, the songs have  caustically ironic lyrics and with some terrible puns thrown in. The show is at times over the top and hilarious, at other times it is quite sad and moving.

As Leika the dog, with his spaceship kennel, Graeme McRae is tremendous. He has us in his paw from his opening solo Scraps. Kind and gentle he is an ordinary canine thrust into an extraordinary situation.

Playwright Samantha Young as Bin Cat, a cat filled with self loathing is superb. There are some allusions to her cousin Grisabella from the other major feline musical. A terrific performance and we empathise with her character.

Eliza Reilly as Queen Cat/Bastet has great fun hogging the limelight and setting the theatre alight as the evil leading lady, Queen Cat. She is more than a little  mad and egomaniacal and unable to tolerate any behaviour unfavourable to her own. Reilly is a slinky excellent dancer stopping the show with her  Coming On Heat.  Totally dazzled and infatuated by Leika she chases him, refusing to comprehend his polite but firm No.

The Mardi Gras influence is in full swing with the delightful Bruno (Jonny Hawkins) and Mars (Gautier Pavlovic-Hobbs) who are the Queen Cat’s slaves who eventually admit that they are in fact gay . Naughty boys! Much fun is had with their camp yet quite acrobatic and demanding singing and dancing.

This mini-musical come across in fact as a plea for equality and acceptance. Why, Leika asks, can’t Queen Cat just ‘Let Them Be’ (It’s Fun to Be Free). The musical ends on a joyous hopeful note.

SPACE CATS runs at the Old 505 Theatre, Newtown until the 12th March.