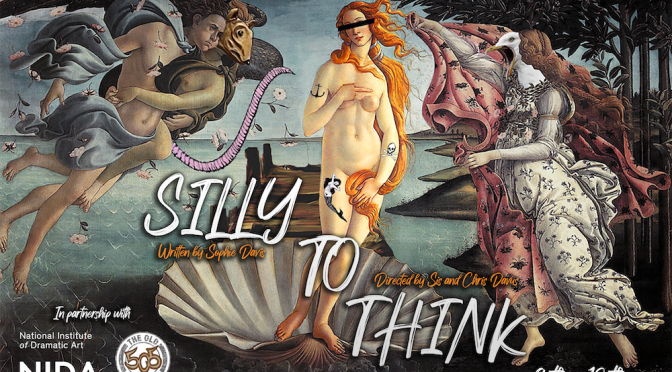 The new Australian play SILLY TO THINK by emerging writer Sophie Davis, best described as “philosophy meets Fleabag” tackles the absurdity of being a woman in a chaotic and bizarre universe.

Given the insanity of a hellish 2020, recent NIDA graduate Sophie Davis foresees a global contemporary Absurdist movement, and her new work  leads the charge.

Subverting the inherent patriarchy of the Theatre of the Absurd, Davis has re-wrote the genre using feminist philosophy and the origin story of Aphrodite to liberate the female protagonist from a convention and society at large which has historically excluded her.

Davis is teaming up with her twin brother, emerging director Chris Davis, to produce the ambitious work under the alias Sis and Chris; this will be the duo’s professional debut.

To round out the theatrical experience, Sis and Chris are collaborating with some of Sydney’s boldest, female identifying musicians romæo, Kiri and Ida Warhol to bookend the show.

Introducing audiences to a new model of theatre going. Audiences are encouraged to stay after the play to debate and mingle, whilst grooving out to emerging musicians; a refreshing change to the traditional debrief on the car ride home.

A short, not to be missed run, SILLY TO THINK will take place at the Sydney Fringe HQ, (previously the Old 505) in Newtown between the 9th – 12th of June.