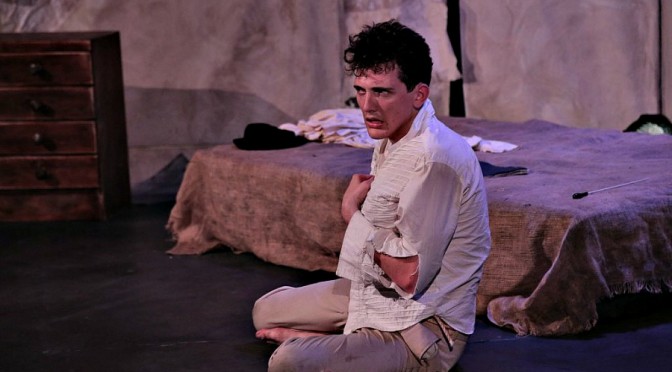 Gabriel McCarthy was a recent winner of Short + Sweet Sydney, and is now presenting his intensely personal one-man show SOMETHING TO BE DONE, that effortlessly communicates every part of his multi-faceted story, without ever needing to say a word., though with the use of very effective soundscape.

Here is an extremely agile and energetic performer, constantly taking giant leaps, and easily leading audiences on his flights of imagination.  Gabriel is an actor of enormous skill, who can make a wink, a look, a movement, a pause, mean so much. Theatre is a shared experience, open to so many interpretations, all depending on one’s own experiences, and this performer easily brings forth laughter from the audience.

The show evolves from Gabriel’s initial pupae/chrysalis state to then take us on a thrilling and often very comical journey. This is his life’s journey of life, performed in the very intimate space upstairs at TAP Gallery.

The show reminds one of old films like ‘When Comedy Was King’, back to the time  when there were title cards on films, before sound on film became “The Talkies” and quickly ushered in the end of the great Vaudeville Comedians.

A Gabatwa Studios production, Gabriel P McCarthy’s SOMETHING TO BE DONE is playing eight shows this week at  the upstairs theatre at the Tap Gallery, Palmer Street, Darlinghurst:- Tuesdays to Sundays at 7.30pm as well as weekend matinees at 3pm and finishes this Sunday.

One thought on “SOMETHING TO BE DONE”