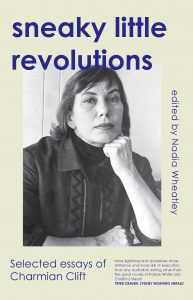 Forthright, funny and with an indefinable flair, Charmian Clift’s writing plays second fiddle to nobody.

For those who’ve forgotten (impossible surely, once read, always remembered) and those yet to discover the charming Charmian, Newsouth has published SNEAKY LITTLE REVOLUTIONS, selected essays of Charmian Clift, edited by her biographer, Nadia Wheatley.

Returning to Australia from living years away in Europe, predominantly Greece, Charmian secured a gig with the Sydney Morning Herald writing a weekly column, which quickly became compulsory reading.

Her observations of the homeland she had returned to became a living part of her readjustment and invited readers to accompany her and reappraise Australia.

These sneaky little revolutions became more and more radical as the 1960s raced on. The war in Vietnam, gender equality, multiculturalism and Indigenous civil rights all prompted fearless commentary.

Writing with a rhapsodic gift, her style immediately invites us to engage in the conversation. In an effortlessly personal voice, she debates political issues, shares societal concerns, and comments on a cavalcade of both the common and the curious.

The vivacity of the writing is what hooks the reader. As these essays attest, she died with her talent still burning and her work unfinished. All the more reason to relish the reading of these pieces, for the sheer pleasure of it.