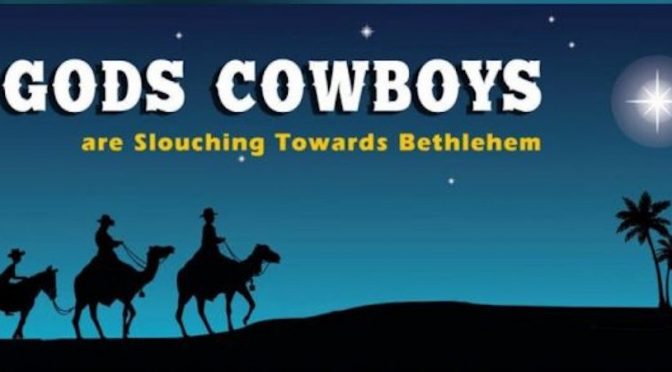 Slouching Towards Bethlehem is a rollicking, funny and entertaining show that borrows songs from the Christian songbook and popular culture and subverts them with exuberance, warmth and intelligence. It is written and performed by Gods Cowboys, who reformed earlier this year after a twenty-three year hiatus.

The show opens with the imposing theme song from The Magnificent Seven as the three performers ride into the auditorium. This potentially grandiose entrance is slightly compromised by their riding of hobby horses but it sets the tone for the evening. Our three performers, George Catsi, John Knowles and David Delves, are dressed as cowboys and adopt a Christian revivalist mode to introduce themselves as God’s Cowboys. Lots of yee-has, Amens and Praise the Lord intersperse their songs and banter.

They re-work various popular songs, such as Ode to Billie Joe and I Walk the Line, with their own hilarious lyrics. I especially liked the hilarious corruption of Ode to Billie. The crowd was entertained and amused and responded enthusiastically. The show also includes the funniest song you are ever likely to hear about circumcision and George Catsi’s hilarious skit as Fatima, the mother of Joseph.

The show has a couple of storylines running through it. One is about Christmas and the giving of presents. The other is about the raising money for Bibleland, a theme park for sickly children with a Jesus ‘n’ Mary go-round, a John the Baptist waterslide and a 360 foot high concrete statue of Jesus on the cross. The songs, jokes and exuberance are the core of the show and the story is mostly an amiable vehicle for the performers’ various talents. David Delves on guitar provides accompaniment, all three performers are decent singers and George Catsi, John Knowles and David Delves are acknowledged as the writers. They have woven subtle messages into the narrative about hypocrisy, gullibility, logic and thinking for yourself rather than believing what you are told. The biting satire is directed at TV evangelism and pyramid marketing that is disguised as religion.

Slouching Towards Bethlehem was performed at the Petersham Bowling Club, a quirky venue worth visiting.

One thought on “SLOUCHING TOWARDS BETHLEHEM :SACRILEGIOUS AND FUN”