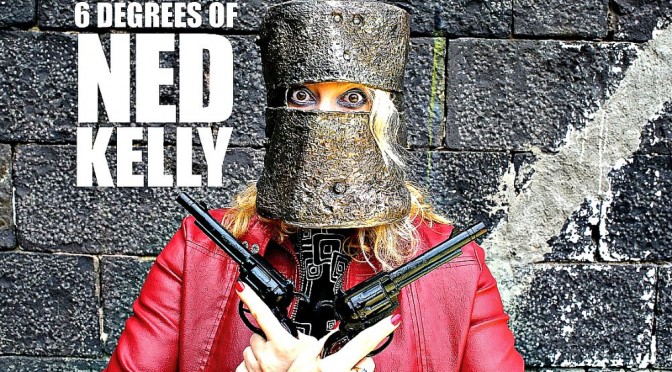 This is a fascinating,  very enthusiastically performed hour long monologue during which we learn about Australian history and the assorted legends that have developed about Ned Kelly and his gang and the ‘six degrees of separation’ that intertwine the Kelly and Rowston families.

Most people have heard of the Kelly Gang and love him or loathe him. Ned Kelly’s place in Australian history is assured. His armour cuts an imposing figure and is instantly recognisable even today and he has influenced many artists as well. One only has to look at the Nolan paintings.

Whether your view is that the Kelly gang were a bunch of misguided youths who were a menace to society or a group of young men who were rebelling against injustice and fighting for a better life, both views are given an airing.

Nora Moloney ran a pub in Wangaratta in the 1870’s. She kept a shotgun under the bar and thought Ned Kelly was ‘scum of the earth’. Apparently Australia’s greatest bushranger of all time was scared of her. Or so the family folklore goes…

Did her grandfather really steal Kelly’s skull ? And on her grandmother’s side are the stories about Nora Maloney and Kelly true?  You will have to see the show to find out.

The show  features the excellent use of film clips and other audio-visual s and sound clips. The show opens with Rowston in a Kelly ‘mask’ and a re-enactment of the (in)famous Glenrowan siege.

There are fascinating insights into her family and historical research and her attempts to separate truth from legend. We see a snippet from an iconic silent film ,as well as Kelly country and the recent Kelly Weekend Glenrowan re-enactment.

We learn how Rowston meets various people in her quest to discover the truth and other assorted facts about Ned and his gang.

Much discussion is given to what really happened with Ned’s skeleton and skull and also what did or didn’t really happen to the other gang members– Dan Kelly Steve Hart and Joe Byrne.

The huge tourism industry that has mushroomed, the barrage of books that have been written are mentioned and we meet some of the scholars, family and friends that Rowston encounters along the way, who swear they’re also connected to Ned Kelly – and will go to amazing lengths to prove it!!

Rowston with her very flexible face establishes a warm connection with the audience who listen keenly to her fascinating story with parts that will make you laugh and sections that will leave you wanting to know more- as well as want to run to the next Kelly weekend re-enactment. In going on this journey to better understand her family history, Rowston uncovers more of herself. As Joseph Campbell says ‘ Myth is much more important and true than history’

6 DEGREES OF NED KELLY is playing Erskineville Town Hall until the 6th September and then moves on to Melbourne.