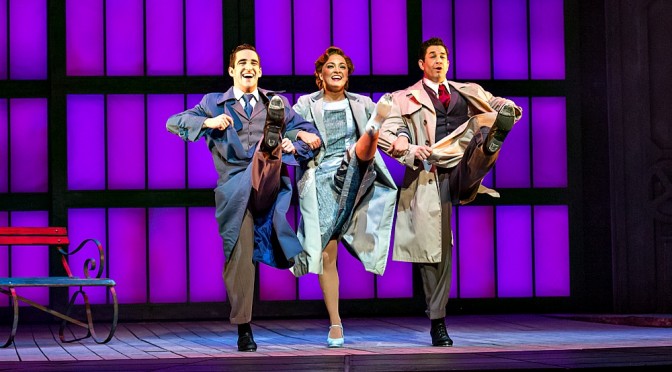 Appropriately, SINGIN’ IN THE RAIN held it’s opening night on a very typical cold, wet, evening in Melbourne at Her Majesty’s Theatre. Rain was lashing down the street and onto the footpath as a large media crowd huddled underneath the marquee while celebrities, including the Newton family, Jason Coleman, and Jeannie Pratt graced the red carpet for photos.

Audience members in the first few rows wore covered plastic ponchos as more than 12,000 litres of water poured and splashed onto the stage and into the crowd during the show whilst Adam and co danced up a storm.

This production had a lot to live up, standing up to such a great film, and the good news is that it didn’t disappoint. From start to finish, the whole production, from the sets, to the choreography, to the singing and dancing along with all the classic songs worked well.

The scene is Hollywood, 1927 and the film industry is struggling to adjust to the changing demands of talkies. The Jazz Singer has just been released and everyone is up in arms about what will happen next. The following year, Walt Disney released Steamboat Willie, the first cartoon synchronized sound. Many in the industry were reluctant about making the transition to sound films. Warner Bros. co-founder Jack Warner once famously remarked, “Who the hell wants  actors to talk?”

Although no one was ever going to top Gene Kelly, Adam Garcia comes close, giving a great performance. His co-stars Gretel Scarlett as talented singer Kathy Selden, and Jack Chambers as Cosmo Brown, also play their roles beautifully. For me, Erika Heynatz as the shrilly and outrageous Lina Lamont really stole the show and left the audiences in stitches with her great comic timing and stage presence. Heynatz particularly impressed in the black and white film sequences used in the production.

This was a classic, high energy spectacular show. After its Melbourne season the show moves up to Sydney where it will play from July 9 to September 11.