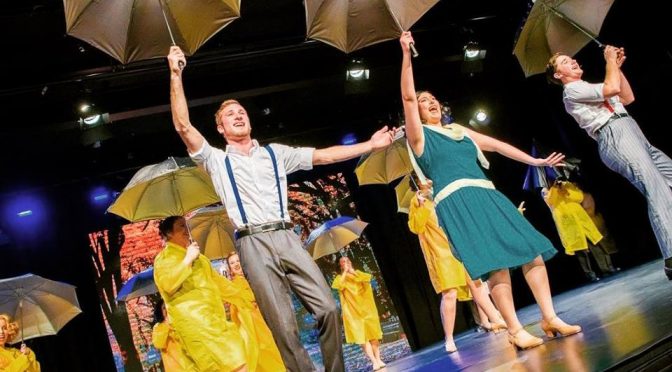 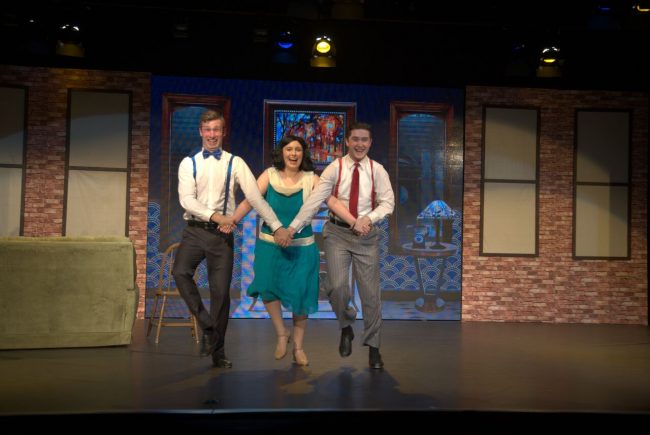 SINGIN’ IN THE RAIN from Blackout Theatre Company is such an upbeat show. It’s about romance and nostalgia and sitting back and having it wash over you. It’s about rooting for the lovers and tapping your feet to the surprising number of well-known songs. Directors Cierwen Newell and John Hanna, apart from one spectacular technical intervention, have wisely avoided any attempt to change its innate character or modernise it.  It fits right into its timeline, giving us a wonderful wistfulness and a delectable parade of scrumptious costumes.  Added to which is a joyous cast and the most enjoyable hoofing I seen this year! I just loved the dancing in this show … loved it, loved it, loved it!

The talkies are coming and silent star, Don Lockwood and his onscreen squeeze, Lina Lamont are looking at a different world than the one that has made them the most loved lovers on the silver screen. Transition might be easy for him but, recorded or live, she grates like a can opener. Conspiracy arises as the execs decide to dub her voice and Kathy Selden, Don’s new and real-life love interest, is co-oped into the role.  Don’s best mate, former vaudeville tap partner and now ambient pianist, Cosmo Brown, is on hand to help where he can.

It’s probably the film and its iconic image of Gene Kelly swinging on a lamppost and splashing in puddles that comes to mind when one hears the name of this show.  However, the big surprise for me was how many songs I recognised in the score.  When the overture begins, the strains and hints of only slightly remembered airs pull one right into the story, as we identify numbers like ‘Make ‘em Laugh’ and ‘All I Do is Dream of You’ swell.  There’s such a delicious warmth of familiarity.

The warmth and generosity of Blackout Theatre’s production begins early when, after the first of a huge number of really well created video sequences, we meet our charming and enthusiastic red carpet hostess Dora Bailey (Renee Bachara) at the premiere of a new Lockwood/Lamont film.  The parade of characters … and costumes … through the audience is elegant and characterful and luxuriously paced. 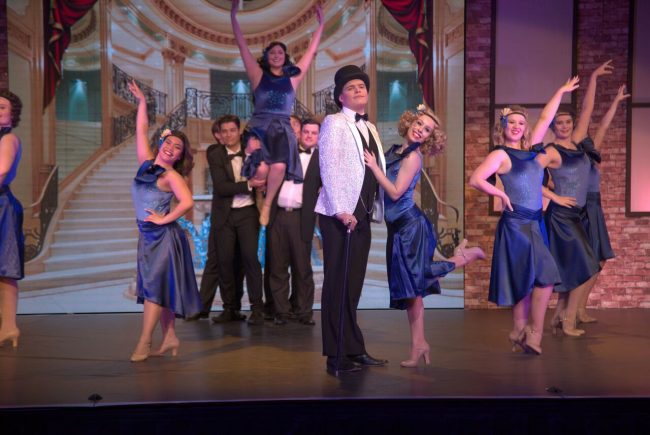 A quick word about those costumes, some of which I recognised with considerable enjoyment.  The curation and creation of outfits in this show is exhilarating to watch. (Angela Therese and Ann Hanna) It’s not just the ever-present sparkle or period cohesion or the superbly managed accessories, where on earth did they find matching apricot gloves? But the way in which the clothes are appropriate for the bodies in cut and movement, the leads look glamorous and handsome and the ensemble is kitted together in a visually stunning way, alike yet individual.

And look for the hints of red in the background players to match his tie in the title song! It’s that attention to detail that I found absolutely thrilling, small things like slightly shorter pants for the men so the tappers aren’t constrained and we can see their superb footwork.  There’s even a range of shoes for our hero so that his outfit always matches.  I loved the cream shoes and when Cosmo’s plaid suit has puppies, I want one!

And those two blokes can dance!  Jonathan Nash-Daly as Don and James Carter as Cosmo Brown are electrifying to watch in their duos and when Cathlyn-Rose McKellar joins them as Kathy, the impressive quotient takes another leap.  These three artists are the heart of the production and their work is exciting to watch.  Nash-Daly and McKellar are charming lovers to believe in, he is dashing and she is feisty and their delightful rapport, from first bench meeting, carries beautifully through the show. In a lovely foil to their appealingly traditional boy-meets-girl story, Carter has ripped a fabulous comic creation off the page without stealing the limelight or upsetting the romantic throughline of the show.

Newell and Hanna have also struck true balance in their direction of Abi Smith as Lina.  Such a finely trod performance from her as she chews the scenery without stealing the scene.  There might be a touch of Marilyn in the dumb blonde but there’s also the strong-willed entertainer who will stand up for herself, however nefarious.

There are many other excellent performances in this production, too.  Daniel Conway as Sid has a small but pivotal role which he handles with great empathy, Martyn Carter’s Roscoe the Director is funny and obsequious and Michael Robinson is sweetly hard-bitten as R F Simpson, the producer with a heart.  And a shout out to two terrific tappers in Declan Wilde and Oliver Vujnovich as young Don and young Cosmo … great job fellas.  The whole Ensemble are fantastic.  There’s so much love in their work and they all have clear characters with exuberant and professional dancing and singing. 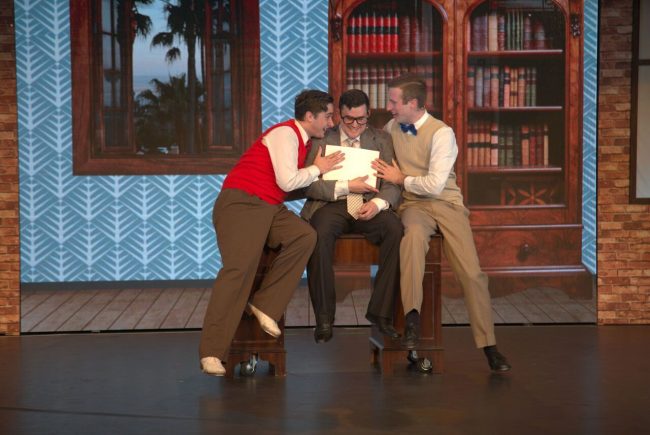 For me, the dancing was the highlight of SINGIN’ IN THE RAIN. (Choreographer: Adam Pickstone)  The production numbers created by this stellar ensemble are pinpoint period in style, down to the detail of different poses and holds for the men and the women.   The images created in movement and in the fluidity of the stage usage are dynamic and so visually interesting…never a dull moment.

And the technical choice to mic the floor so as to showcase the taps is also very clever.  The audio might have been finding its feet on opening night, just too loud in the main, but the design works well for the show with the band (Musical Director: Koren Beale) held under in places and allowed to shine in others. ‘You Were Meant for Me’ had a lovely mix which allows McKellar and Nash-Daly’s heartfelt singing and acting to touch the emotions in a very satisfying way.

The other very important aspect of this production is the screened images.  One wouldn’t want to give too much away about the extraordinarily well executed film and stills but once again it’s all about the detail … check out the diverse range of period wallpapers! And the puddles!

SINGIN’ IN THE RAIN is pure entertainment and a tremendously engaging way to spend a couple of hours and I defy you not to come out of the theatre humming the encore! I managed to annoy my companion for a good ten suburbs on the way home.  It’s energetic excellence in community theatre and in a brand new theatre to boot.

SINGIN’ IN THE RAIN from Blackout Theatre [Facebook] continues at the Pioneer Theatre, Castle Hill until October 20. 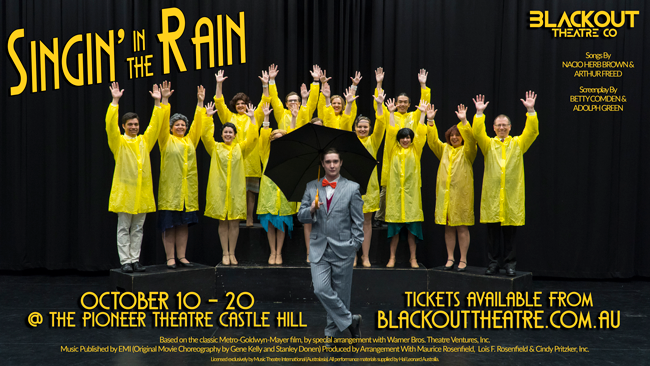 2 thoughts on “SINGIN’ IN THE RAIN: HUGE PUDDLES OF ENJOYMENT”