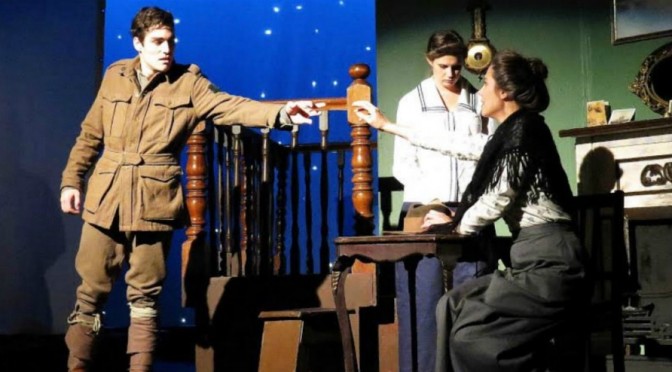 Sydney has seen many artistic salutes to war heroes recently as the 100th anniversary of the Gallipoli landing draws near. In a well-timed season, the Genesian Theatre presents Richard Beynon’s moving play SIMPSON, J. 202, celebrating Gallipoli legend John Simpson, whose use of a donkey to rescue many of the wounded is well known to many Australians.

Theatrical devices such as split stage for simultaneous action and letter reading or writing give the piece great variety and pace. This Genesian Theatre version of this well-structured play is clearly directed by Mark Gerard Nagle. Charm, sincerity and energy abound as this tale of family, adventure and mateship unfolds before us.

We spend most of Act One in South Shields, with the young animal-loving John Kirkpatrick and family. The dialect peculiar to that area, as coached by Mark Anderson for this production, is brilliantly and consistently delivered. It brings an engaging lilt to the exposition and shapes a solid tribute to John’s heritage. The society of his formative years is vividly painted in this realisation.

Act Two deals with John Kirkpatrick’s travel from his family and dead father to Australia. His eventual enlistment in the army as quite an atypical soldier is well portrayed by Ryan Bown. Army camp and Gallipoli scenes are shared with vitality by Charles Cosgrove as a very contrasting soldier Robbie Robertson and a passionate, not so cliché Sergeant Hookway as personified perfectly by Rob White.

The onstage Kirkpatrick family is represented ably through the earnest performances of its very brave women. Annie Kirkpatrick (Penelope Berkemeier) and Mrs Sarah Kirkpatrick (Julia Kennedy Scott) are a formidable backdrop from which John Simpson emerges and is later missed with each minute and every heartbreaking letter.

The role of John’s mother is a portrayal of terrific range as played by Julia Kennedy Scott. Her command of her half of the stage is impressive as she comments on her son’s energy and her daughter’s steadfastness. Scott and Berkemeier convey with great chemistry the strong team needed at home when the men were off fighting.

John Kirkpatrick’s youthful exuberance, disregard for education, love for his parents and connection to animals is illustrated in every urgent gesture and word of Ryan Bown’s depiction. The lovable larrikin streak seen in the first act is greatly developed is Act Two as Simpson clashes with the Australian soldiers.

Costumes are suitably varied depending on scene and character. John Simpson’s casual variations on his uniform suit the character well. The shifts in the staging and emotions are effectively emphasised through lighting effects, freezes and use of blackout.

The play’s quality construction ensures a dénoument which tugs at the heartstrings. An emphasis on John Simpson’s family life and shorter time spent on quick, colourful interactions as a soldier makes his untimely death all the more powerful. We are reminded of Simpson’s bravery and sacrifice in a well-paced tribute to make even the toughest sergeant and audience member cry.

If SIMPSON, J. 202 is the only current Anzac – themed event you get the chance to see, it will not disappoint. The humanity leaping off the stage and richly developed, well-known story are rewarding elements. This finely-drilled tale complete with several big hearts plays at the Genesian Theatre until 2 May.