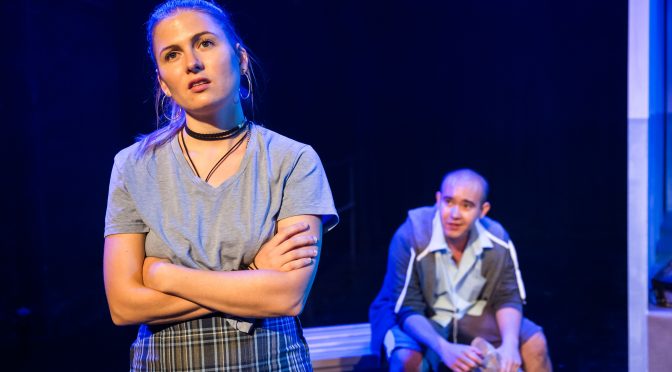 It is most common stuck in traffic I think.  Glancing across at someone car dancing and wondering what they are dancing to.  They wiggle and head bang in a world of their own, caught up by the irresistibility of rhythm or the thump of bass.  It leads me to wonder …  what is beneath their choice to block out the world and have that tiny moment of pure self.   SILENT DISCO, written by Sydney playwright Lachlan Philpott,  playing at the New Theatre is like that.  We see what they do, how they move in the world.  But understanding them through what they say is tricky … it’s all coloured by the unreliable narration of Tamara.

Tamara is a teenager, poorly socialised and in a poverty trap not of her making, who, despite the fact that she is looking directly at us, will speak indirectly. It’s seldom that we get an “I feel” or “that made me …”  We need to understand her by what she does.  She tells the truth but not all of it.  Her interactions with her distant father, absentee mother, teacher, her new boyfriend even a work colleague are volatile, reactionary and shruggily punctuated.   Her teacher will support her despite abject exasperation at her behaviour, her boyfriend will hold her close and try to reach her.  And while we watch it all we know that Tamara and girls like Tamara are not OK.

Opening night nerves were on display at the performance I attended.  The large tracts of first person dialogue were rushed, rote, not varied and too soft when listening from the back rows.  But Act 2 was terrific and show what this play will become as it settles into its season.  The overlapping dialogue mixed well in the exposition sequences and the narrative was beautifully paced towards the denouement.  Obviously very well rehearsed by director and cast, the tension built in a very engrossing way.

Gemma Scoble as Tamara really did pelt through the first act and the word pictures were not well drawn.  But the character was clearly present in the horribly familiar body language and in the expression of Tamara’s reactive, explosive, self-handicapping psyche. Tamara is incapable of answering a question with directness or truth, yet she has a wry way of pronouncing truisms and false beliefs and these were much more commanded by Scoble’s slower, centred, second act.  An act where there is much more dialogue, more events to explore and several gripping interactions.

Including the limited, but important, nurturing of Tamara’s latent talent as a writer by her teacher, Mrs Petchell (Leilani Loau).  Also a bit downplayed early, Loau did give us a strong  portrait of a teacher nearing the end of her time at the chalkface.  That list of girls and what took them away and the boys who fell by the wayside are an inevitability of long teaching career and Loau endowed those speeches with real gravitas. In her interactions she projected the reserve that teachers must have to survive… that the rules are important for life skilling.  Yet, despite having seen it all before, her empathy towards Tamara and Squid was believable and realistic.

Squid, the new boyfriend is played by Badaidilaga Maftuh-Flynn and he also crafts a realistic character.  He has excellent use of body language to give the hulking, sulky teenager initially but as his relationship progresses he becomes open and looser.  After being betrayed, the hurt and the denial of hurt vibrate in him leading toward the climax of the piece.

As Tamara’s co-worker Natasha McNamara does a great job by bringing sheer recalcitrance to the role… appalling customer service from those two! And her blowsy, self-centred Leanna was terrifically horrifying. The cast is rounded out by Tom Misa as the jailed brother and the always reliable Brendan Miles.  Misa did give a sense of institutionalism in Dane but the reasons for taking up with the girl were a bit too shrouded.

It was a rare misstep for director Johann Walraven who has created a thoughtful and thought-provoking production.  The dancing sequence, for example, was exceptional, not just for Scoble’s stellar interpretation but for its incitement of female sexualisation through music videos.  It was tight, well executed and replete with condemnation.   Similarly, his use of silence at the climax was a very impressive directorial choice among many.

There is considerable whole company professionalism on display in the entrances and exits which need to be perfectly timed.  Same with those speedy costume changes.  The set (Ester Karuso-Thurn) works well to frame the action with a geometric art, Georges Rousse feel when looking into the box.  The details of decay and mould at the top of the institutionally coloured walls works very well as does the use of fluorescent tubes inside the school space where shadows are used to good effect.  There are some dips in the front wash but the cast are adept at getting in the right amount of light.  And the colours are well chosen, I especially appreciated the hue saturation of the blue during the sex monologue. (Lighting: Liam O’Keefe)

Music and sound effects are well sourced and created, the alarm just right and the evening hit of bat and birds very evocative. (Composer/ Sound Design: Jessica Dunn) Also effective is the ambient music for emotional engagement.  But does the interval music need to so abrasively loud?  It’s a tricky control room and occasionally the music, especially early on when the cast were a bit soft, was distracting.  However, that thump effect after interval like a distorted heart or an insistent door knock played well and the muffled parent fight with hits of sirens was profound in its implication for Tamara’s view of what went on.

And, really, we only have Tamara’s word for everything that she, and those around her, see or do in SILENT  DISCO.  And the 2 hours we spend with her, that glimpse into a world that does not treat her kindly,  silently reproaches those of us who judge and condemn.  It’s an unsettling feeling that stays with you.