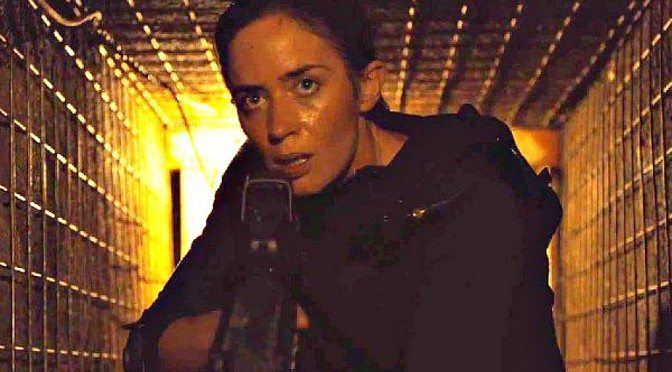 SICARIO is scary, think TRAFFIC meets THE SILENCE OF THE LAMBS.

But this ain’t Afghanistan. It’s Arizona. The target is a suspected drug clearing house. It is gruesomely discovered that its a cartel charnel house, cadavers crammed in dwelling’s wall cavities. Hannibal Lector’s freezer eat your livers out!

Arizona FBI agent and kidnap-response-team leader Kate Macer is part of the squad that discovers this house of horror and is soon seconded into a secret unit led by Matt Graver, whose own enigma is over shadowed by the uber mysterious Alejandro.

Kate knows who she is- FBI. But who are her colleagues? DOD, CIA, DEA,? Acronym anonymity leads to acrimony, fuelled by confusion.

SICARIO is a smartly calibrated thriller that explores moral ambiguity in a powerful mix of immense emotional tension, high-intensity action and ethical complexity .

Homeland security and border protection are much closer to home than the Taliban and ISIS, with the Mexican cartels just as ruthless as any foe in the Middle East. The scourge, as one of the characters comments, is self inflicted. The percentage of the population in the United States that snorts and smokes, injects and ingests proscribed pharmaceuticals keeps the illicit economy growing creating a military industrial complex of cartels who are metastasising into a cancer that is making incursions into the body of America.

Director Denis Villeneuve, no stranger to visceral and provocative narratives, attested by his Oscar nominated INCENDIES, brilliantly navigates this multi layered and multi faceted story with an attentive and delicate eye for detail.

The casting is twenty four carat, with the three central characters leading a knockout ensemble.

Emily Blunt as Kate is a cinematic soul mate of Clarice Starling from SILENCE OF THE LAMBS; smart, capable, a moral compass whose closeness to the poles of pragmatism swings her sextant of due process spinning.

Josh Brolin as team leader Matt Graver, gives a swaggering gravitas as the whatever it takes but we ain’t taking prisoners spook.

And Benicio Del Toro is chilling in his portrayal of the enigmatic Alejandro, damaged avenger with a ferocious focus.

Character threads are so expertly sewn into the fabric of this film that the material becomes epic and the production values are all from the same magnificent loom, especially Roger Deakins exquisite cinematography. Deakins has been nominated eleven times for an Oscar and SICARIO should garner him a twelfth.

Drugs, terror, illegal immigration, corruption, SICARIO is the true grit of a no man’s land, no country for old men, a vicariously visceral vision of the heart of darkness and the borders of our souls.