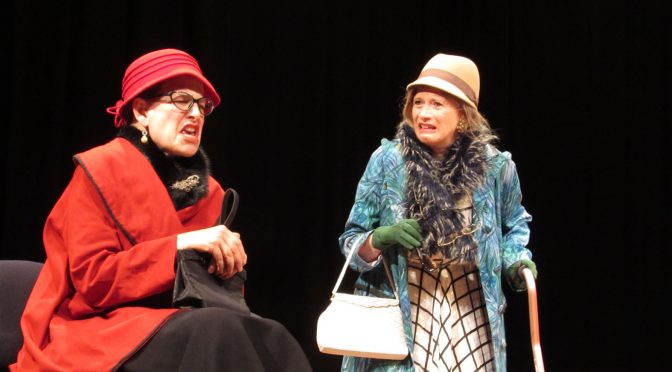 (1) “Which Goldberg?” directed by Louise Reily and written by Michael Strang. Very clever dialogue comedy of manners and persons, set in a Jewish funeral home, just before the funeral service for Abe Goldberg. Memorable stand-out performances from the two older women, who talk continuously about all the people they know, because they both knew a man called Goldberg, however are they supposed to be there? Starring Liz Hovey, Joanna Weinberg and Simon Lenthe (Rabbi).

(2) “Late Night Pizza” directed by Jasmin Geissen and delicious drama written by Frank Leggett. She chose him and she jumped him. A passionate one-night stand the morning after nightmare, as Paul constantly tries to get rid of his new lover (Mary), a woman apparently with the sole purpose of waiting for the delivery of the pizza she just ordered. A dark secret unfolds about his DUI and his dangerous driving and her need for serious revenge is ahead. Starring Jayden Muir (Mary) and Pe,ter Sahlani (Paul Smith).

(3) “The Perfect Life” directed by Nisrine Amine and written by Angie Farrow. Absurdist comedy in under ten minutes, the perfect/imperfect life from birth to death at 67, and in the end wanting to un-choose the life choices and start life again. Starring a stellar ensemble cast with some in multiple roles, Nisrine Amine, Matt Lausch (Jethro, at every age), Lisa Robinson (as his wife, Josephine), Care McPhie.

(4) “Enough To Wake The Dead” directed by Michael Harris and intense argumentative comedy written by Catherine McKernan Doris, complete with running gag about “a wee cup of tea”. Fighting disrespectfully whilst wailing like banshees, all done in front of their recently dead mother, are her three daughters, and her three nieces. Starring Maria Karambelas as Granny, Vanessa Moltzen as Sheila the youngest daughter, Stephen Penn as Bernie/Man, Alyssa Kale as Eleanor, Jessica Loudon as Maggie (the oldest daughter who is absolutely not happy), and Eloise Eftos as Patricia. Wildcards Judges – first place winner.

(5) “The Origin Of The Species” directed by Lakia Lyons and elegant couples drama written by Robyn Patterson. How can science try, to explain away religious faith? Pigeon Pies and pigeon cadavers, or was that Squab Pie? Dialogue intensive audience favourite. Starring Peter David Allison as Charles Darwin and Lisa Stewart as Emma Darwin.

(6) “Vietnam Zippos” directed by Erika Lydrama and an intense anti-war drama written by J. Weintraub (Chicago USA). Vietnam War from begining to end, via the vivid inscriptions engraved on the Zippo lighters, that was carried by every soldier. Starring David Neill as Voice One, Chloe Byrd as Voice Two, Matthew Taylor as Soldier One and Sean Foster as Soldier Two. Wildcards Peoples Choice – first place winner and an entry into the Gala Finals.

(7) “Badda Bing Badda Bang” from ITC Black Box Theatre Company, directed by Jarrod Sleiman, with this delicious mates comedy dilema as written by Tom Peach. Their best friend Peter has died, and his mates have decided to bury and hide his secret life, from his Aunt May. Well there are so many secrets, that Peter kept from his friends, such as his wife, his children, et cetera. Starring Bryson Grenfell, Sam Lovell (Bruce – Peter’s guard dog mate), Sam Sweeting, James Turnbull.

(8) “The Grind” directed by Rosie Niven, a coffee-shop-related love story drama about drinking tea, as written by Andrew Cooper. Love is . . . a first date turning into a five year relationship of many mistakes, soon to be ending at their favourite place, the library. Directed by Rosie Niven and Starring James Coates as Him and Julia Hyde as Her.

(9) “One For The Money” from ITC Bouquiniste, directed by Phillip Boatswain. Think “Wolf Creek”, this is a serial murderer comedy/drama, as written by Clayton Zane Comber. On the highway, driving to Parkes, an Elvis Impersonator picks up a hitchhiker with a small esky, but with unexpected consequences. Wonderfully chosen, Elvis song titles are the revealing one-liners. Starring Murray Clapham as Bobby, Adam Hodkinson as The Hitcher, Steve Maresca as Elvis and Dana Gray as The Police Officer.

(10) “Death Comes For Breakfast” generous and quirky comedy from ITC Another Bloody Theatre Company, directed by Romney Stanton, as written by Mark Grzic. Bart invites Death to attend his bacon fuelled breakfast. His upstairs neighbour Jazz arrives, the Devil wants more and more bacon, and when death comes a calling, you must obey every command. With a completely unexpected ending, generated heaps of applause. Starring Meg Hyeronimus as Jazz, Keturah Sheen as Death and Danen Young as Bart.

(11) “Belly” from ITC The Spontaneous Theatre Comoany, interesting comedy about eating to excess, as written and directed by Cliff Keen. So who will win, The Patient or The Doctor? Starring Cristiane Bocchi as The Patient and The Belly, together with Maria Agustina Hurtado as The Doctor and The Brain.

(12) “Deuce Cooper: The Bloomfield Case” directed by Walter Grkovik and written by Paul Braveman. Our forever sleuthing private detective Deuce Cooper, is a dim bulb, that has used flukes to generate his illustrious career, but needs to urgently solve this stubborn case. Multiple twists brings this detective comedy to an unexpected end. Starring Tom Lambeth as Deuce Cooper, Rhianne Evelyn-Ross as the secretary Donna, Francisco Lopez as Donnie No Sleeves, John Grinston as Uptown Brown, and Emma Wright delivers a standout performance as the girlfriend Betsy. This year has a new venue for S+S, and very comfortable seats a maximum of 171. Week Nine, The Wildcards Final Saturday 31st March 2018 and Sunday 1st April 2018. The S+S play festival has new shows every week for eight weeks, and runs through to April with both a Top 80 program (Thursdays-Fridays-Saturdays at 7.30pm and Sundays at 6.30pm) together with a separate Wildcards program (Saturdays at 3.30pm and Sundays at 2.30pm). The S+S gala finals will take place from Thursday 5th April 2018 until Saturday 7th April 2018.